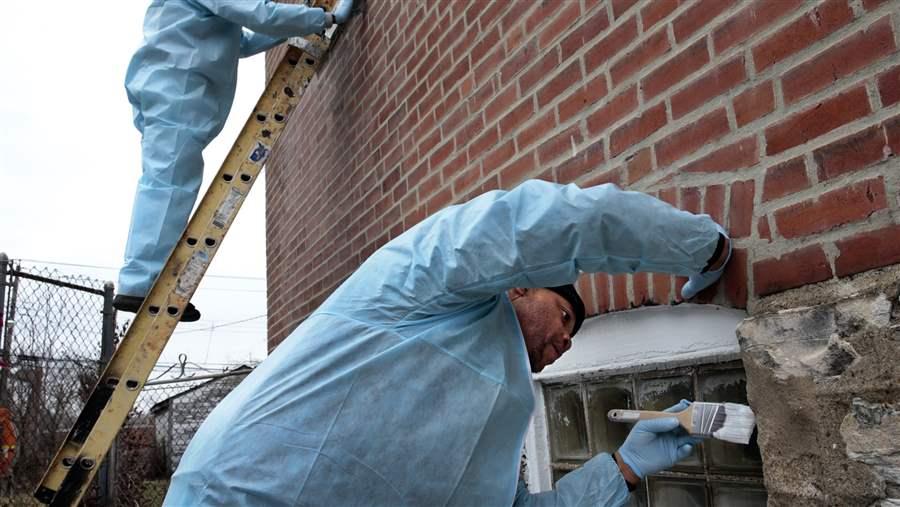 In the wake of the Flint water crisis, states are rushing to test for high levels of lead in drinking water. But many are failing to come to grips with a more insidious problem: lingering lead paint in homes and schools.

Paint, rather than drinking water, remains the main source of lead poisoning of young children in the U.S. But even though there are myriad federal and state laws designed to eradicate lead paint, enforcement is lackluster, hampered by a lack of money and the misperception that the problem has been solved. Many state laws don’t conform to federal recommendations, and federal funding for lead abatement has been slashed from $176 million in 2003 to $110 million in 2014.

Though the federal government banned lead-based paint in 1977, it persists in an estimated 38 million homes, lingering on old window frames and trim, and in dust. According to the U.S. Centers for Disease Control and Prevention, children in at least 4 million U.S. households are being exposed to “high levels” of lead, and an estimated 535,000 children between the ages of 1 and 5 have elevated lead levels in their blood. (The CDC does not consider any level of lead safe for children.)

Lead poisoning in children has been linked to lower IQs, hormonal issues and behavioral problems, costing U.S. taxpayers an estimated $55 billion annually. A 2009 study determined that every dollar spent on limiting lead exposure saved taxpayers between $17 and $221 by reducing spending on health care, special education and crime.

Under federal rules finalized in 2010 after many years of delay, workers and firms engaged in renovation, repair and painting must be certified and trained in the use of lead-safe work practices. But environmental health experts, such as Tom Neltner of the Environmental Defense Fund (EDF), say enforcement of the federal rules at the state and local level is inconsistent.

“We’ve known how to solve this problem for years,” said David Jacobs, chief scientist at the National Center for Healthy Housing. “What we lack is the political will and funding from both private and public sources. Rather than let this thing drag on for another several decades, we should do the smart thing and invest, so that kids don’t have reduced IQs and behavioral problems.”

Some states, such as California, Indiana, Maryland, Massachusetts, Minnesota, Michigan and Ohio, have rigorous lead abatement laws on the books, said Neltner, chemicals policy director of the EDF. But in others, laws are too weak or are inconsistently enforced.

Some federal and state lawmakers are taking action to address the problem.

Earlier this month, Virginia’s U.S. senators asked the federal government to step up lead testing for children eligible for Medicaid. Other senators have also introduced legislation requiring the U.S. Environmental Protection Agency to update its lead standards for dust and soil; tax credits for removing lead paint; and requiring all states to report elevated blood-lead levels to the CDC.

In Wisconsin, which has one of the highest rates of child lead poisoning, state legislators want to update the state’s lead paint abatement codes, which conflict with CDC recommendations. Currently, the state’s definition of a blood-lead level that constitutes “poisoning” is twice that of the CDC. The proposed legislation would beef up enforcement and reduce the blood-lead level requirements for a state investigation — essentially requiring the state to act sooner than it has in the past.

“The state isn’t complying with the CDC,” said state Rep. Chris Taylor, a Democrat who last year introduced a bill to reduce the blood-lead level that would trigger state action. “They haven’t made children a priority in any capacity. They’ve been hoping no one discovers this.”

Even in Maryland, one of the states Neltner highlighted as a leader, state legislators are calling for better enforcement of state laws in the wake of a Baltimore Sun investigation that uncovered a breakdown in state and local oversight of lead paint in rental housing. Bills that would have held paint manufacturers liable for lead poisoning failed to make it out of House and Senate committees this spring. Similar bills were introduced in Maine, but did not advance.

If states and localities vigorously enforced the federal rule that went into effect in 2010, “we could dramatically reduce the amount of lead in our blood and better protect those half-million kids that have already been poisoned,” Neltner said.

“I look at that as the single most important thing that we can do.”

The health risks of lead paint have been known for decades. As far back as the turn of the last century, public health officials were linking childhood poisoning to lead paint. In 1977, the Consumer Product Safety Commission banned lead paint in residences and public housing, furniture and toys, citing safety concerns for children, who might ingest paint chips.

Dr. Robert Geller, medical director of Emory University’s Georgia Poison Center, noted the tremendous progress that has been made in reducing blood-lead levels in children. As a result of intensive efforts by federal, state and local officials, levels in children and adults have dropped by more than 80 percent since the late 1970s. No level of lead is safe, but the CDC considers poisoning to be 5 micrograms of lead per deciliter of blood.

But many lament the fact that after so many decades, the problem is still with us.

“Very few communities have invested in getting rid of all the lead paint in housing,” said Rebecca Morley of the Pew Charitable Trusts, who for years worked on lead abatement with the U.S. Department of Housing and Urban Development. (Pew also funds Stateline.)

“The main thing preventing us from eradicating this disease has to do with the perception that the problem is solved,” Morley said.

Low-income populations and communities of color are more vulnerable to lead poisoning, particularly if they live in dilapidated housing. African-American children are three times more likely to have elevated blood-lead levels than are white children.

But the national craze for renovating older homes, as seen by the popularity of HGTV shows like “Fixer Upper,” has had an unintended consequence, housing experts say: Now children across the economic spectrum are at risk.

In 2005, two of Tamara Rubin’s four children became violently ill soon after she and her husband began renovating a 91-year-old house in Portland, Oregon. For two months, nothing seemed to help. Rubin fought with her pediatrician to test her boys for lead exposure.

Finally, the doctor relented, and the tests confirmed Rubin’s fears: two of her boys, a 3-year-old and a 7-month-old, tested positive for lead exposure. The couple’s contractor had used an open flame to peel lead paint off the exterior walls of their house — permeating the inside with toxic fumes. The boys, now 11 and 14, still struggle with a host of health and behavioral issues, including learning disabilities, anxiety, compromised immune systems and Tourette’s syndrome.

“My kids didn’t eat paint chips, or crawl around in the dust,” said Rubin, who is now working on a documentary about her ordeal. “Because we were white and middle-income, they said we weren’t the demographic to be tested for lead. But this is an ‘everyone problem.’ ”