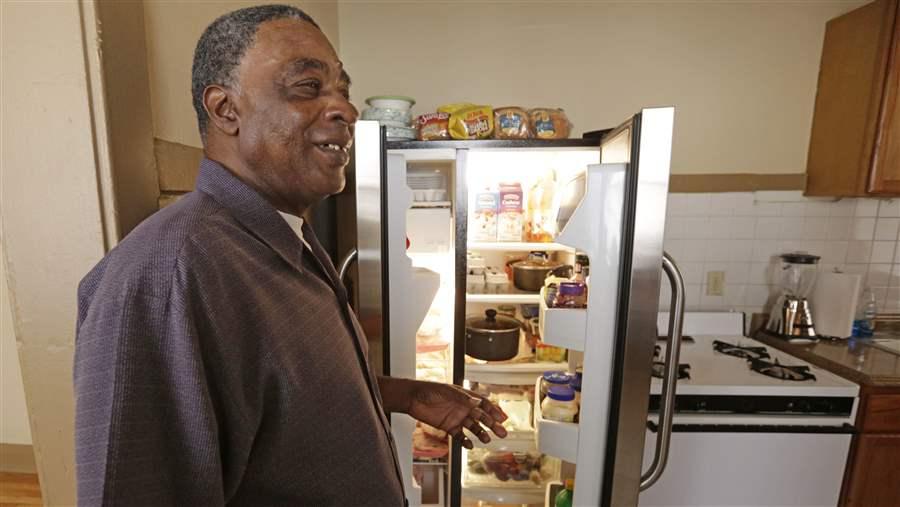 George Wilson shows off a refrigerator he shares with roommates in a sober home in Chicago. The number of older adults addicted to drugs and alcohol is growing, but they are often squeezed out of help by the large number of younger addicts.

PORTLAND, Maine — When Clifton Hilton decided to quit drinking this month, he called a residential drug and alcohol detoxification center in this coastal Maine city on a Friday afternoon and was told a bed was available for him. But by the time he arrived on a bus from Bangor the next morning, the bed had been taken.

“I just walked the streets for five days,” Hilton said. It wasn’t until Wednesday that the Portland detox facility, the Milestone Foundation, had an open bed for him.

Hilton, 70, is more fortunate than most of Maine’s growing number of low-income seniors with a drug or alcohol abuse problem. He was able to find help for his alcohol addiction and said he expects to secure a spot at Milestone’s sober housing facility in Old Orchard Beach once he gets “straightened out.”

As the nation’s opioid addiction epidemic expands, older adults in Maine and other states face mounting barriers to getting help for abuse of alcohol and opioid painkillers — not the least of which is finding they are squeezed out of scarce treatment facilities by younger people with prescription drug or heroin habits.

And that’s only if they seek help. Many older Americans are reluctant to ask for it out of shame of being an addict at this point in their lives — creating what addiction experts call a silent epidemic.

The silent epidemic also distorts the true toll that addiction has on the nation. Drug-related deaths of the elderly are often undercounted because it’s assumed on death certificates that they died of their age-related illness, not an overdose of pain pills, said Dr. Andrew Kolodny, who runs a New York-based group of addiction treatment centers.

Despite the relatively low number of older adults reported dying from an overdose, a new analysis from Stanford University shows that people covered by Medicare — the federal health care program for people 65 and older and those with disabilities — have “among the highest and most rapidly growing prevalence of opioid use disorder.” More than 6 out of every 1,000 Medicare patients are diagnosed with an opioid disorder, compared with 1 of every 1,000 patients covered by commercial insurance plans, according to the report.

But getting treatment can be expensive. Seniors who do seek help find that Medicare does not cover most types of addiction treatment, something advocates have been trying to persuade the federal government to change for years.

Low-income seniors who are unable to pay for treatment find few options in Maine and 18 other states where Medicaid coverage for the poor has not been expanded under the Affordable Care Act to cover able-bodied adults.

Like Hilton, many older addicts face waiting lists at treatment facilities. And elderly people with prescription painkiller or heroin addictions often are less able to cope with the wait because they lack transportation, family support and the stamina to persevere.

For the vast majority of addicted seniors, habitual and heavy drinking is the problem. Because elders are often isolated from family and friends, particularly in rural parts of the nation, their drinking problems go undetected until they end up in a hospital from a fall or serious alcohol-related health problems.

When elderly alcohol addicts are referred to treatment, they often end up in a situation similar to the one Hilton faced here.

“Just two years ago, 90 percent of our beds were available for people with alcohol disorders,” said Milestone’s director Bob Fowler. “Today, more than half are taken by people with opioid addictions.”

Hilton, a native of Damariscotta, a small town up the coast from Portland, quickly makes clear that alcohol was all he ever used. As a trucker in his working years, he said he once smoked a joint.

“It put me in a coma,” he said. “A six-pack of beer would do the same thing for me. I was never into drugs, never. I couldn’t see the price of it.”

The vast majority of people 65 and older with a substance abuse problem use alcohol, according to national surveys conducted by the U.S. Substance Abuse and Mental Health Services Administration. It is more culturally accepted among older people here in Maine and in most of the country — and more readily available.

And while younger people may have access to heroin and illicit prescription drugs through their social contacts, many elders see alcohol as their only option to ease the physical pain and loneliness of aging.

But a growing number of seniors are quietly becoming addicted to prescription pain medicines such as OxyContin, Vicodin and Percocet, and sedatives such as Xanax, Valium and Ativan.

A new study by researchers at Texas State University and the University of Michigan indicates a significant increase in the abuse of prescription painkillers and sedatives among people age 65 and older since 2003. It’s a trend the researchers warn could result in increased harm to older Americans if additional public health measures are not taken.

In Maine, where the median age is 44, making it the oldest state in the country, there is a growing need to expand addiction treatment and prevention for older Mainers. The aging of the baby boomers, born between 1946 and 1964, portends an expanding elderly drug abuse epidemic nationwide.

According to the National Institute on Drug Abuse, “Baby boomers' histories of illicit drug use, and their relatively tolerant attitudes toward it, along with the fact that they now comprise nearly 30 percent of the nation’s population, have raised the stakes on understanding and responding effectively to drug abuse among older adults.”

So far though, state responses to the opioid epidemic have largely been aimed at younger people and those involved in the criminal justice system.

As states and the federal government devote more money to expanding access to medication-assisted addiction treatment, seniors may benefit along with everyone else, Kolodny said.

But most state and local programs, including outreach and education efforts, are not tailored for older people. “It’s an underreported problem that needs addressing,” he said.

Nationwide, the prevalence of seniors addicted to prescription medications has been growing for more than a decade. Since the mid-1990s when doctors began liberally handing out opioid painkillers, elderly people as a group have received a disproportionate share of those prescriptions because of age-related pain.

Many became addicted, but typically were able to continue taking their medications because doctors considered their worsening pain a natural part of the aging process.

But in recent years, tighter prescription drug monitoring laws have made it more difficult for seniors and others to continue taking high doses of opioid medications prescribed by their doctors. In many states, physicians must check patients’ prescription drug history to see if they are taking pills prescribed by more than one doctor. If so, they may limit patients’ doses, prescribe fewer pills or cut them off altogether.

As a result, some seniors have begun seeking illicit drugs, making their addictions more visible in places like needle exchanges and public health clinics.

Maine’s prescription drug law, enacted in April, is among the strictest in the nation. It limits both the duration and the dosage of prescriptions, and requires doctors to check a patient’s opioid painkiller and sedative prescription history before handing out more pills.

The fallout from the opioid epidemic on older people is complicated, said Dr. Jabbar Fazeli, a geriatric specialist in Portland.

“The opioid frenzy is getting so much attention that it affects patients and families,” he said. “Many are afraid to take painkillers even when they are recommended. We’ve gone from a concern that we’re undertreating pain to the other extreme.”

Still, he said, Maine is doing the right thing to restrict opioid and sedative prescribing. But time will tell whether curtailing the number of pills doctors prescribe will lower the overdose death toll. So far, that hasn’t happened in Maine.

After Maine tightened the rules on opioid painkiller prescribing in its Medicaid program in 2012, state data indicated more people moved to heroin and other illicit drugs, Fazeli said, and the number of overdose deaths did not decline.

The number of seniors coming into Portland’s health department who have turned to heroin doubled in the last year, although the total number remains relatively small, according to the facility’s patient log. Social workers at the clinic say they also are increasingly hearing from younger drug users that their parents or grandparents are abusing prescription medications or using illicit drugs, but refuse to seek treatment.

In Search of Sobriety

Outside of a hospital emergency department, Milestone is the only publicly funded residential facility in Maine where people with drug or alcohol addictions can get medical detoxification assistance.

Milestone’s medical director, Dr. Mary Dowd, said she’s seeing seniors who have increased their alcohol intake to blunt physical and emotional pain when the prescription painkillers or sedatives they’ve been taking are no longer available.

For Hilton, drinking has been a lifelong problem. He started when he was 13. His parents drank. But he said he’s had some “wonderful years of sobriety” and doesn’t want to waste any more time.

Wearing a clean white T-shirt, black jeans and brand new lumberjack boots, he says he’s ready for a fresh start. Hilton said he has been homeless since his wife died two decades ago, but he managed to stay sober for the last seven years, until his brother committed suicide in June.

His most recent years of sobriety started at Milestone in 2009, when he lived and worked at its Old Orchard Beach sober living facility.

“I had good sobriety there,” he said. “It was a close-knit group.” He wonders whether Big Scott, Slippery Beth or any of his other old pals will still be there.