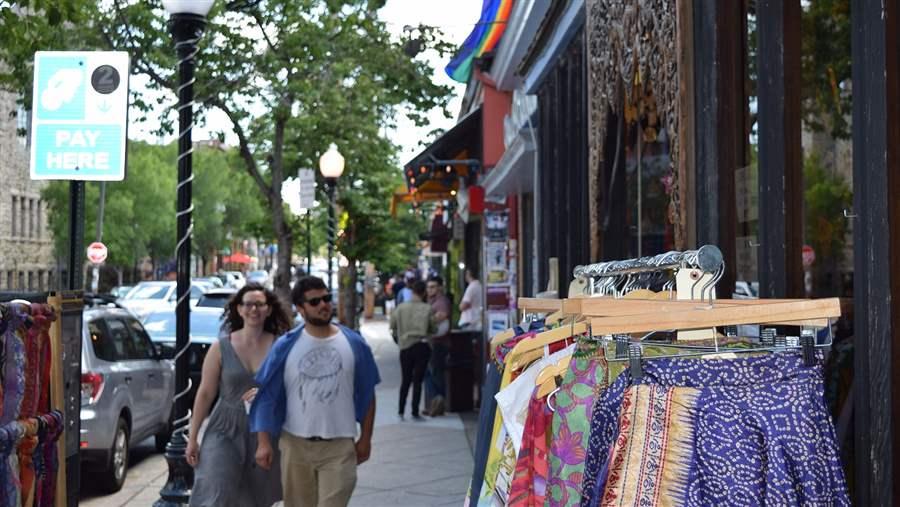 Baltimore’s Hampden neighborhood. Baltimore is one of several Rust Belt cities that are witnessing an increase in college graduates even as their overall population dips.

BALTIMORE — Educated millennials are transforming some neighborhoods in several Rust Belt cities like this one, where old flour and textile mills are being converted to apartments and faded industrial districts have become thriving enclaves with colorful street life.

Staci Knobel, 28, recently moved to the once blue-collar Baltimore neighborhood of Hampden with college friends after finding herself “bored, depressed” in upstate New York. Here, she said, she has found excitement in the city’s electronic music scene and computer gaming conventions.

“I love the city, I’ve made friends and explored. It’s affordable and hip,” Knobel said.

Baltimore — along with Buffalo, New York; Chicago; Grand Rapids, Michigan; Pittsburgh and St. Louis — is experiencing some of the biggest increases in the number of young college graduates among large cities. They are hoping this wave of young people, often drawn by industries that require an educated workforce, will offset broader population declines and reinvigorate their economies.

Population won’t rebound immediately, said Richey Piiparinen, who studies the Rust Belt at Cleveland State University, and likely will never return to the levels of 60 years ago, when manufacturing dominated employment. “But when you attract educated people with a knowledge economy, you’re restructuring and creating a magnet for other people to move in.”

Baltimore, Pittsburgh and St. Louis saw their population of educated millennials grow by more than half since 2000, despite population losses overall, according to a Stateline analysis of census data collected from 2010-2014.

Among large cities, only Jersey City, New Jersey, and Washington, D.C., which are growing in overall population, had bigger proportional gains for the group.

Baltimore lost 28,000 people since 2000, about 4 percent of its population. But the drain would have been worse without the increase of 22,000 young graduates living in the city. Grand Rapids, Chicago and Buffalo had increases that were more modest but still helped to counter overall losses.

Some growth is to be expected, as the large millennial generation of those born starting in 1982 moved into the 18 to 34 age group. Nationally, the number of young college graduates grew 36 percent since 2000. As members of the largest and most educated living generation, millennials are sought after by cities that hope to replicate tech booms like those on the West Coast.

“St. Louis, Pittsburgh and Baltimore are former Rust Belt cities that were given up for dead but are making a comeback because their universities were able to remain world-class centers of research,” van Agtmael said.

Housing costs are a big part of the story.

The high cost of living in high-tech centers like Seattle and San Francisco has made them less attractive to many young people, van Agtmael said. At the same time, affordable housing has helped new hot spots of innovation in Rust Belt cities to emerge.

Jacqueline Albright, 25, said the relatively low cost of housing was one reason she stayed in Baltimore after graduating from Loyola University Maryland. She would have paid at least three times the rent in her native New York City, she said, and the choice of jobs in Baltimore was more interesting.

Gaming and software are important tech sectors in the city now, and Albright, assistant director at a city economic development agency that encourages emerging technologies, pointed to recent startups — such as online marketing company SocialToaster Inc., mobile-ad firm Millennial Media, and OrderUp Inc., a food delivery service — as examples of the kinds of tech businesses that hire people like her.

Baltimore has 13 colleges and universities, and more nearby, and the city has worked to keep graduates here, said Susan Yum, a managing director of the Baltimore Development Corporation.

Libby Francis said she came to Baltimore from the District of Columbia looking for urban life at a lower cost in her mid-30s, about 10 years ago.

“I was a single adult chasing the dream of homeownership and I’m not made of money. It was getting pretty depressing,” Francis said. In Hampden she found a house for $110,000 and the financial freedom to open a locally sourced flower shop. “You can actually be an artist here and pay the rent.”

Tech opportunities and a taste for city living also have drawn young people to Pittsburgh and St. Louis.

Christine Karslake, vice president of a tech incubator network in downtown St. Louis, said hundreds of new companies are being helped with everything from advice to funding. The area has also become well-known for agricultural research and “fintech,” or financial services software.

“We provide many of the tools and resources needed for millennials and others to start new companies and to be able to thrive at it,” Karslake said.

Alex Ihnen, who writes about development at nextSTL.com, said St. Louis and other Rust Belt cities have relatively small downtown areas that can draw large numbers from surrounding suburbs.

“If the preference of educated millennials shifts from inner ring suburbs to the city proper, the percentage can be big,” he said.

There are obvious signs of the influx, like new dog parks and coffeehouses, Ihnen said. And the arrival of new young residents has helped keep St. Louis economically viable.

“Millennials are having a greater positive impact on the population of the city of St. Louis than any generation in several generations,” he said.

Pittsburgh has tried to attract young people with more apartments and public spaces downtown, like Market Square and Mellon Square, said Thomas Link, director of the city’s Center for Innovation and Entrepreneurship, a redevelopment agency.

“Much of our direct business investment efforts over the last decade have been with a mission to support fast-growth companies that create many of the jobs that millennials seek,” he said.

The rapid decline of the steel industry in the 1980s forced the city to get more creative and collaborative, leading to more ties between business and universities, said Rebecca Bagley, the University of Pittsburgh’s vice chancellor for economic partnerships. That approach has recently started to pay off, as Google and Uber have expanded operations in the city, she said at a recent Brookings Institution conference on Rust Belt innovation.

Other old manufacturing cities that haven’t done as well at keeping or attracting millennials since 2000 see hope in the trend.

Akron gained less than a hundred young college graduates since 2000, not enough to help much with a 9 percent loss of population. But the city is poised for a comeback, van Agtmael said, pointing to polymer research at the University of Akron as an example of recent developments that are drawing more young people.

And Cleveland sees hope for more youth as tech business models from the West Coast make their way east, according to a study this year by the Cleveland Foundation.

The number of new graduates in Cleveland shot up during the recession and afterward, reversing losses from the early 2000s, the study found.

“As the economy stabilized,” the study said, “the growth in educated millennials began diffusing from the country’s largest urban centers into ‘flyover country,’ such as Cleveland, Pittsburgh, San Antonio and Nashville.”