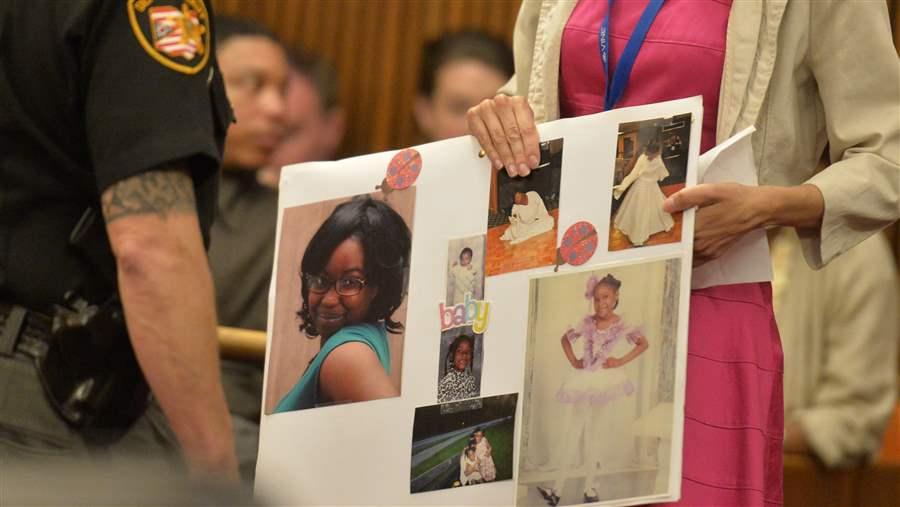 A court worker holds a board of photos of Shirellda Terry, a victim of Ohio serial killer Michael Madison, who received a death sentence last month. Some victims of crime and their families say talking with offenders helps them come to terms with what happened.

Every other Friday, Peggy Steele picks up the phone and talks to the man who murdered her son more than 20 years ago.

Steele and Bryce Todd Brosier, who was convicted of killing 25-year-old Jimmy Steele in 1995, exchanged a few letters about five years after the crime. But it wasn’t until 2014 that they met face-to-face, in the Colorado prison where he is serving time, and talked about the murder.

Colorado is one of 31 states that offer victim-offender dialogues. It’s a form of what’s known as restorative justice, which encourages both sides to talk about how they were affected by a crime and offenders to take responsibility for their actions.

In many states, offenders serving time are barred from contacting victims. But the prison-based programs give victims a chance to ask questions in ways they weren’t able to in court. Prisoners get a chance to do something positive for those they’ve harmed.

Restorative justice is also used in many jurisdictions before incarceration. This allows offenders to avoid jail time for low-level crimes by meeting with their victims to discuss the incident and how they can make things right. But prison and parole offices are increasingly adapting restorative justice programs to help those who have committed serious and violent crimes while they are in prison and as they reintegrate society — sometimes without the participation of victims or their families. 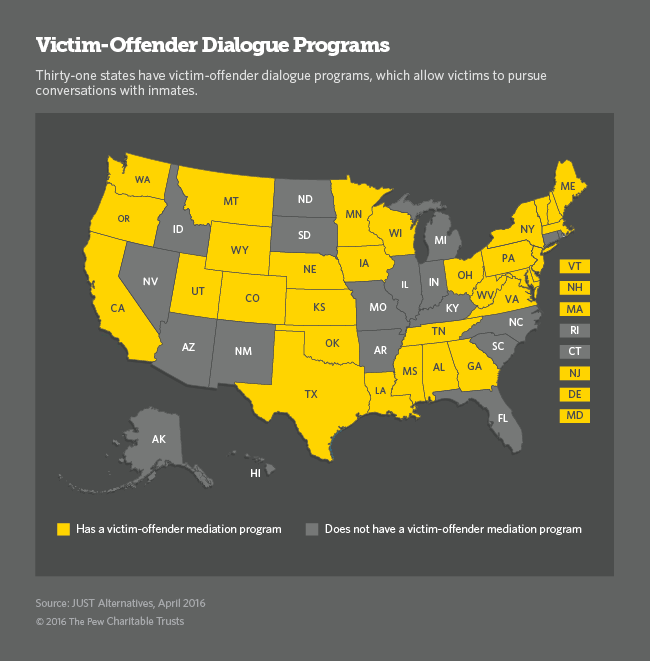 Steele said she wanted specific details about her son’s death. “I wanted to know what he went through,” she said, and what his last words were — “Oh god, Todd, why?”

“I brought my son into this world and wasn’t there when he died,” she said. “For 19 years I just had so many scenarios going through my mind. Now I don’t have to imagine anymore.”

It was hard for her to hear, she said. And Brosier, 47, who is still in prison at Arkansas Valley Correctional Facility, said it was hard for him to tell.

“Looking in Peggy’s eyes and telling her about killing her son — that changed me,” he said.

Brosier wanted to know how her son’s stabbing had affected Steele’s life. And that was hard for her to talk about. “I felt like if I told him all the things that changed because of my son’s death, that would shame him,” she said.

“I would think about her on holidays or on Jimmy’s birthday. Would she be thinking about him?” Brosier said. “Would she be hanging an ornament on Christmas remembering how she had bought this for Jimmy’s second birthday?”

Both said they left their prison meeting with a lot to digest. But it helped them begin to put the crime behind them, and they have continued with regular phone calls. That ongoing relationship may be unusual, but the empathy that restorative justice often elicits is not.

In Texas, which has one of the largest prison dialogue programs in the country, the focus is entirely on the victim rather than rehabilitating the offender.

It must be a victim who initiates the process, and each has his or her own reasons for doing so, said Lauren Bledsoe, who supervises victim-offender dialogues for Texas.

“Some of them have questions about the crime, about what happened. Or in the case of a homicide, some want to know why or what their loved one’s last words were. Some want them to hear the full impact of the crime, and others feel very strongly about offering forgiveness,” Bledsoe said.

Though courts typically allow victims to file a victim impact statement during trial, many say they leave the process unsatisfied.

For Steele, it was about getting answers she couldn’t get through the traditional justice system, where she said her voice was silenced.

“You have no role in it at all,” she said of the trial. “You’re told what you can and can’t do, what you say and can’t say, where to sit and where you can’t sit. You are treated like you’re the criminal.”

Setting up a dialogue takes months of work. Program staff meets with both sides separately to prepare them for the encounter. In Texas, participation is voluntary for inmates and it is confidential, which means prisoners cannot bring up their participation before the parole board.

“A good percentage wants to do something positive and help the victim in some way,” Bledsoe said. But the sessions can be emotionally taxing for offenders, who are offered mental health services or counseling by a prison chaplain.

The feedback from victims has been largely positive, with many saying they felt a sense of relief or empowerment after being in control of a situation with their offender, Bledsoe said.

But not all restorative justice programs are so victim-centered.

Massachusetts’ Department of Corrections runs a dialogue program that is similar to Texas’ but also allows volunteers to run restorative justice programs that don’t include victims.

Karen Lischinsky, an assistant professor of criminal justice at Curry College in Milton, Massachusetts, offers an eight-week course on restorative justice at a Norfolk prison.

“Offenders can go into deep denial because nothing in the system makes you confront what you did,” she said.

Lischinsky also offers inmates a trauma group that concludes in a circle where offenders sit not with the victims they harmed but with victims of other crimes, who talk about their experiences.

Some advocates of restorative justice — such as Jon Wilson, who facilitates the Massachusetts dialogues and heads JUST Alternatives, a Maine nonprofit that promotes victim-centered dialogues — say both parties need to participate for offenders to be able to make amends.

But Lischinsky stands by her approach.

“What we see is an exchange,” she said. “Survivors share with the men, and the men are more able to take in and empathize with survivors. And for survivors, it’s very healing to be a witness to that and to talk about grief.”

Some states use other practices based on restorative justice to help offenders re-enter society.

In the late 1990s, Vermont began setting up community justice centers that hosted discussions between low-level offenders and their victims. In 2006 the centers began hosting “circles of support and accountability” for high-risk offenders who had committed serious crimes, such as sexual assault and domestic violence, to help with re-entry.

About 60 circles meet every week in Vermont. They match recently released offenders with three or four people in the community. Victims do not participate in the circles.

Offenders who participate aren’t trying to make amends for a specific offense, said Derek Miodownik, who oversees the state program. Instead, the circles “are restorative in that they are about relationships. They are about the ways in which you are conducting your life … and your thinking patterns so that you’re contributing to the community and not creating any more victims.”

Stuart Recicar, who oversees the circles in Burlington, said volunteers help recently released prisoners talk through the choices that landed them in prison as well as new decisions that have the potential to do so again. The groups can hold offenders accountable by calling their parole officers if necessary, but they can also help with basics like learning to use a cellphone or attaching a resume to an email.

“It seems commonplace to us, but when you’ve been incarcerated for 20 years there’s a steep learning curve,” he said.

Miodownik said many groups ask to continue meeting past the one-year mark. However, each circle costs the state about $10,000 a year, he said, and the state cannot afford to continue all of them even though they’ve been shown to curb recidivism. A 2014 study found that 27 percent of offenders who participated in the circles were convicted of new crimes, compared with 44 percent for nonparticipants.

Similar programs are underway in Colorado for serious offenders leaving local jails. Sex offenders are placed in circles that meet every other week. Others, who are considered high-risk because of previous offenses, meet with a circle two or three times as part of an intense supervised probation program.

Neither typically have the victim present, but they are designed to create a new support system for the offender. Greg Brown, the chief probation officer in Boulder, said members of the offender’s family often sit in on the session to talk about their experience having a relative in the criminal justice system. Like in Vermont, volunteers are part of the circle, giving offenders a chance to connect with new people in the community.

“A lot of these guys get isolated and shamed and the only other people that accept you aren’t the most productive people in the world,” Brown said. So the volunteers are meant to serve not only as a support network but as role models as well. “A lot of these guys say, ‘I can’t believe they give up time to talk about my story. It’s the first time someone’s listened to me about why I did it and how I ended up here.’ ”

This is part two of a two-part series on restorative justice.