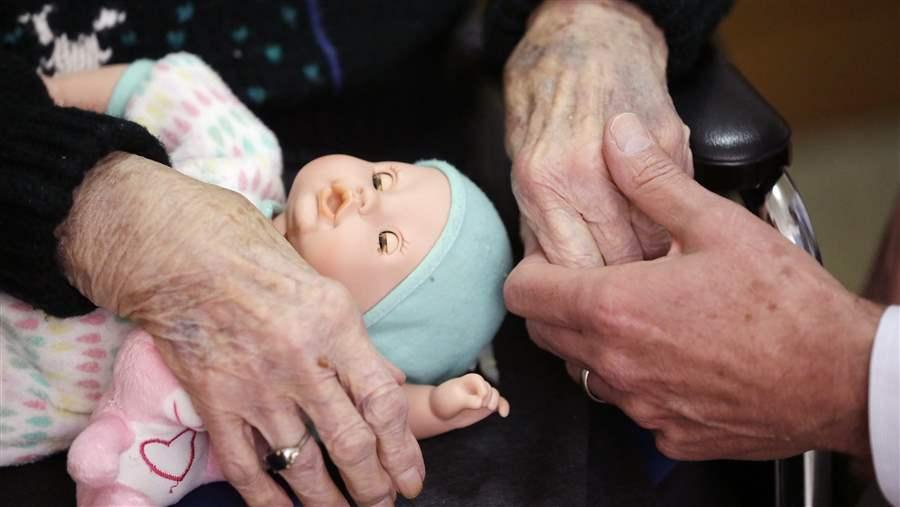 A son holds his mother’s hand at her nursing home in Adrian, Michigan. Many states are trying to make it easier for people to age in their homes instead of in more costly nursing homes.

Facing a wave of aging baby boomers, many states are trying to make it easier for frail seniors to stay in their homes — as many prefer — instead of moving into more costly nursing homes.

States have a huge stake in where aging seniors and disabled people end up getting long-term care because many of them won’t be able to afford to pay for their care and will have to rely on Medicaid, the health care program for the poor and disabled. Each state has its own Medicaid program, funded jointly by the state and the federal government.

Some states have been ahead of the pack in dealing with long-term care issues. In Minnesota, for example, nursing home beds have been cut more than a third as the state focuses on its home and community-based care system. In Hawaii, the state set up a program offering frail older adults in-home services at no charge.

More than a dozen states now allow residents whose income exceeds the threshold for Medicaid eligibility and who want to get care in their homes to set up a Miller Trust, a separate bank account for medical or other approved expenses. The states exclude that money when determining whether residents are needy enough to qualify for Medicaid in-home services, which can allow people to stay in their homes.

Nebraska passed a measure last year to set up three resource centers that will provide long-term care information and access to services that can make it possible for people to stay in their homes and communities.

Some states, such as Vermont, run a program that compensates caregivers — often family and friends — for their time taking care of Medicaid-eligible seniors who choose to live in their own homes, but need assistance. This eases the burden on caregivers and makes it more likely they’ll be able to continue providing services.

States from Louisiana to Wisconsin to Washington state have set up study commissions or advisory panels to explore ways to provide or fund long-term care for an aging population.

And while Congress repealed a long-term care insurance program that was originally part of the Affordable Care Act because it was not financially viable, many states are using federal dollars from the ACA to fund other long-term care services with the permission of federal administrators. The programs are aimed at allowing seniors and the disabled to receive care and age in their homes or transition into the community from institutional settings.

State officials face a huge challenge. More than 6 million Americans are 85 or older. That number will jump to almost 9 million in 2030 and nearly 18 million by 2050.

“Long-term care is going to be a serious problem for the states, in terms of Medicaid,” said Robert Moffit, a senior fellow at the conservative Heritage Foundation and member of the Maryland Health Care Commission. “And it’s going to get larger and larger as baby boomers jam the system.”

Most long-term care isn’t medical. It’s a range of services that help frail elderly or disabled people with their daily living activities, from bathing and using the toilet to cooking and taking medications. It can be provided in a person’s home or in an institutional setting, such as a nursing home.

The federal government requires that state Medicaid programs pay for nursing home care for low-income seniors and disabled people. But individual states decide whether to cover home- and community-based services. Many seniors who want to remain in their homes rely on family and friends for help. If that’s not possible, they pay for such care out of pocket until they spend down their assets to qualify for Medicaid. At that point, the burden shifts to state government.

“The impact is going to be huge,” said Matt Salo, executive director of the National Association of Medicaid Directors. “While the face of Medicaid is pregnant women, kids and low-income working families, that’s not where most of the money is going.”

Nearly two-thirds of all Medicaid spending on services is for seniors and people with disabilities, who together make up only a quarter of those enrolled in Medicaid.

Medicaid pays for 52 percent of all long-term care, according to the Kaiser Family Foundation. A recent report found that federal and state Medicaid spending on long-term care in 2014 was about $152 billion.

For decades, the bulk of Medicaid long-term care dollars went to care for older adults and disabled people in nursing homes and other institutions. But that trend has shifted, as states react to financial pressures and people prefer to get services in their homes. In 2014, 53 percent of Medicaid long-term funding was spent on home and community-based care.

About a quarter of boomers turning 65 between 2015 and 2019 will require long-term care that will cost at least $100,000 over the course of their lifetimes. Nearly two-thirds of that group will have to pay at least that much out of pocket, according to a report by the U.S. Department of Health and Human Services and the Urban Institute.

In recent years, some companies that sell long-term care insurance have hiked rates and reduced benefits. Others have exited the market. And many people can’t afford it. The average annual premium in 2015 was $2,772.

Hawaii and Minnesota are two states that have been planning for ways to contain costs and keep seniors safe and healthy in their homes into the mid-21st century.

“We have a rapidly aging population and this is a big issue,” said Hawaii state Sen. Rosalyn Baker, a Democrat who chairs the Commerce, Consumer Protection and Health Committee. “People want to age in place and stay at home. We need to find ways to help them do that.”

More than a decade ago, Hawaii passed a law setting up a framework for a long-term care financial plan. Even before that, Hawaii created Kupuna (Hawaiian for “elder”) Care, a state-funded program aimed at keeping frail older adults in their homes by providing them personal care, housekeeping or other services. The program is free and has no financial eligibility requirements, although priority is given to lower-income people who don’t qualify for Medicaid.

This year, Baker sponsored a bill that would have created a first-in-the-nation, public long-term care insurance program, adding a half-cent surcharge to the state’s excise tax on goods and services. The money could have provided residents about $70 a day for 365 days to pay for caregivers or respite care. The measure passed two committees but died in a third.

Baker said the bill would have saved the state money by reducing the number of people who would need to rely on Medicaid for in-home care. She said it failed because many of her colleagues were opposed to any tax hike in an election year. She plans to propose a similar measure next year.

Minnesota also has been planning ahead, and ranks first in a scorecard compiled by AARP and other groups on the quality of states’ long-term care systems.

Three decades ago, Minnesota placed a moratorium on nursing home beds and set out to build a community-based care system for older adults. The number of nursing home beds dropped from more than 48,000 in the late 1980s to about 29,000 last year, according to Loren Colman, an assistant commissioner for the state’s Department of Human Services.

More than 31,000 elderly people now get home- and community-based care through Medicaid, he said. Across the state, local agency staffers help them find services so they can stay in their homes.

“Most older adults are limited in their resources. They’re comfortable in their homes. They want to stay there,” Colman said. “They want services to be brought to them.”

Colman said Minnesota is fortunate that legislators, governors, advocates and policymakers all have been on board with the state’s long-term care vision.

That hasn’t been the case everywhere.

In California, Democratic state Sen. Carol Liu, who chairs a select committee on aging, proposed a bill creating a long-term care czar, setting up a consumer-friendly internet portal where residents could get information, and consolidating all aging and long-term care programs under one state agency. The czar and portal proposals didn’t fly. And Liu revised the reorganization provision to instead create a council that would collaborate on issues and develop a strategic plan.

Her bill passed the Senate in January and awaits action in an Assembly committee. But it faces stiff opposition from the state’s Health and Human Services Agency, which says it’s unnecessary and would be a financial and administrative burden. A Senate Appropriations Committee analysis estimates it would require about $600,000 in start-up costs and $425,000 a year in operational costs.

All of this frustrates Liu, who said after 20 years of hearings and studies about long-term care, California’s system remains fragmented, inadequately funded and ineffective. She said a patchwork of 112 programs in 20 different state agencies, departments and offices is responsible for long-term care, and staffers work in siloes and don’t communicate with each other.

Liu fears that the state isn’t prepared to handle the aging demographic, and points to a 2015 study that projects that by 2030, more than a million California seniors would require some type of personal care help. Another study estimates that the state’s Medicaid long-term care costs could grow from $6.6 billion a year in 2013 to as much as $12.4 billion in 2023.

“The situation is almost criminal,” she said. “If this continues and we don’t get our act together, by 2030, the costs to the state — and to our seniors — will be incredible.”