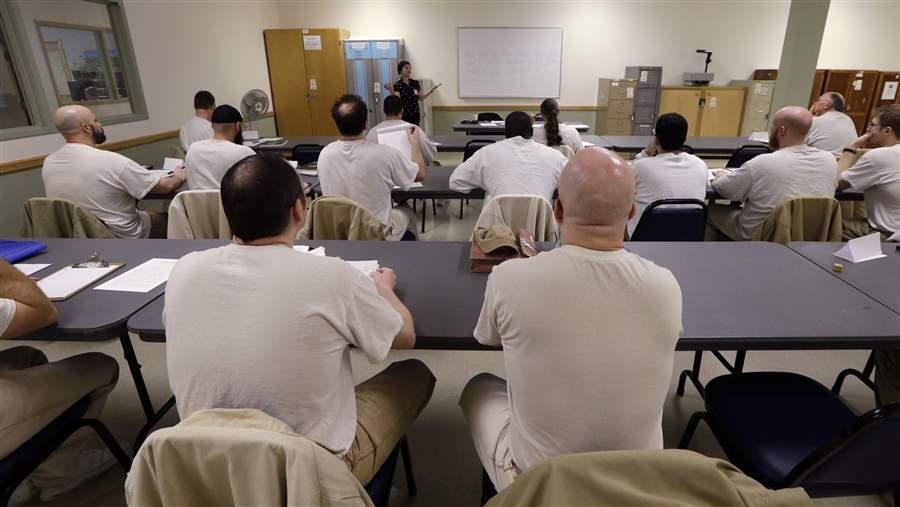 Inmates at their college world history class at the Monroe Correctional Complex in Washington state. Studies indicate that access to education can reduce recidivism rates.

NEW HAVEN, Mich. — Smiles crept across the faces of a dozen inmates at the Macomb Correctional Facility last week as Heather Gay, education manager for the state prison system, relayed that for the first time in over two decades, the federal government might pay their college tuition while they are incarcerated.

The group has been living and studying together for two years in the medium security prison here northeast of Detroit as part of the Pathways from Prison to Postsecondary Education Project, an experiment conducted in Michigan, North Carolina and New Jersey and run by the nonprofit Vera Institute of Justice.

The goal: To demonstrate that offering a free college education to prisoners approaching release can reduce recidivism.

The Pathways classroom work wrapped up this spring in Michigan. So for those at Macomb with time left on their sentences, Gay’s news that a pilot program will reinstate prisoners’ access to Pell Grants — federal educational loans used by low-income students — means they can continue to work toward degrees while in prison.

The federal grants, which President Barack Obama reinstated on a limited basis for prisoners, are intended to help inmates avoid becoming among the 40 percent of ex-offenders who return to state prisons within three years of release.

Even inmates who participate in high school or vocational education, let alone college, are 43 percent less likely to reoffend after they are released from prison, according to a 2014 RAND Corporation analysis.

Proponents of Pathways hope that their program, which replicates on-campus programs in the prisons, will have even better results.

Most states offer prisoners vocational training, GED preparation or basic education courses. But traditional higher education has eluded many inmates since a 1994 federal law made them ineligible for the popular Pell Grants.

Post-recession decreases in state funding for prison education — a 6 percent drop on average from 2009 to 2012 — also has hurt states’ ability to educate the 78 percent of inmates who lack any post-secondary education.

Jackson College, a community college about an hour and a half southwest of Detroit, offered its curriculum to incarcerated students at Macomb and the nearby Parnall Correctional Facility. The school is expected to administer 1,305 of the reinstated Pell Grants in Michigan prisons, more than any other college in the country. They expect at least 30 of the current Pathways students in the two prisons will continue their education under the Pell program.

The Pathways model could also save money in the long run. It costs Michigan nearly $35,000 to incarcerate an inmate for a year. The cost for a day has increased by about $24 since 2003.

The RAND study estimates that every dollar spent on education for inmates saves $5 in re-incarceration costs.

“They can pay multiple times for me to come back, but you only have to educate me once,” Albert Murray said. The 33-year-old inmate, who couldn’t even type when he started the Pathways program, expects to be released from Macomb later this summer with 60 college credits and a 4.0 GPA.

Jackson College professors aren’t strangers to working with incarcerated students. The school started teaching in Michigan prisons in the late 1970s. But when the Pell Grants disappeared, so did the classes.

“We stopped,” Jackson President Daniel Phelan said. “There was no longer the financial incentive for inmates to be able to pursue education.”

Now, the school runs one of the largest prison education programs in the country, serving more than 200 inmates who pay tuition themselves. It once served 163 inmates in the free Pathways program.

Jackson’s courses for Pathways inmates are offered in the same fashion as traditional campus courses. Inmates share their living space and take digital literacy and keyboard courses to prepare them for a college workload.

“We wanted to make sure that [it] wasn’t some college-lite — that there was real quality,” said Fred Patrick with the VERA Institute.

It’s not yet known how all the Pathways inmates will fare on the outside. But the Michigan inmates have high GPAs, and make up 25 to 30 percent of Jackson College’s dean’s list, although they comprise just 2 to 3 percent of the college’s part-time students.

In explaining the prisoners’ stellar performance, Michigan wardens point out that unlike other prison housing units, the buildings where Pathways students live are quiet and have minimal disturbances.

And so far, all Pathways participants who have been released are working or going to school, Gay said. Inmates who complete the program receive extra support from parole officers and case workers to ensure they transition to work or school.

Many of the Michigan inmates, like W.C. Morris, 41, want to earn business degrees to build on skills and trades they already know.

Morris expects to be released in January and already has 50 credits (an associate degree would require just 10 more) from Jackson College. He said he hopes finishing his degree will provide employment opportunities and break a cycle of incarceration that he’s been in since the 1990s.

“When I lost my job, I had nothing to fall back on,” he said. “I got into selling drugs, and that’s how I ended up back here.”

Some of the Michigan inmates who have had vocational training during previous incarceration said they feel more prepared to go to work in their communities now that they’ve done some traditional college coursework.

By 2020, almost two-thirds of jobs will require a postsecondary degree and additional training after high school. The Michigan inmates say general studies classes teach professional communication and other soft skills they’ll need in any work environment.

“[Employers] want the employees they’re hiring to have those soft skills,” said Rebekah Woods, the provost at Jackson College. “And those are the pieces that we’re teaching in that full degree package. Those are the ones that will stay with you forever.”

“Folks with the least resources end up with the most rigid education and have trouble pivoting between careers when the economy changes,” she said.