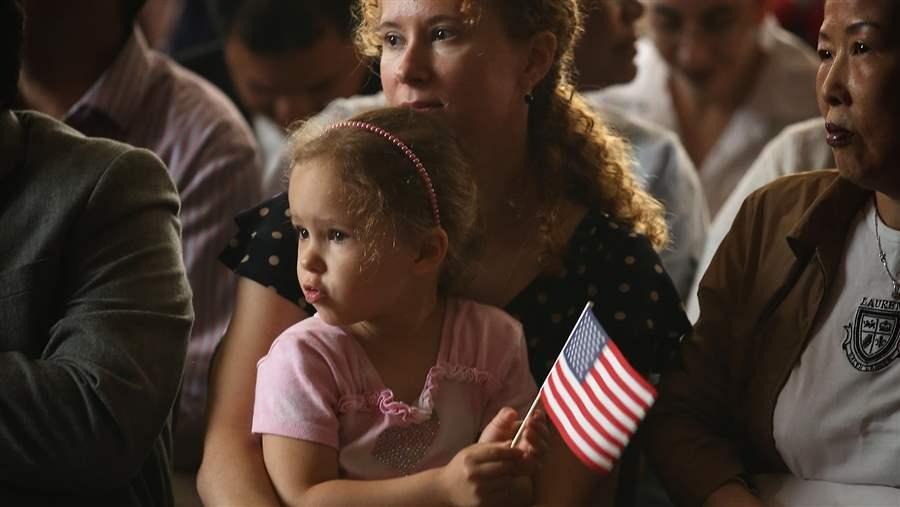 Tatyana Liakh of Belarus sits with her daughter Maria during a naturalization ceremony at the Chicago Cultural Center on July 3, 2013 in Chicago, Illinois.

Adam Hunter directs and Karina Shklyan is an associate for Pew’s immigration and the states project.

An estimated 8.8 million U.S. residents who are not citizens are eligible to naturalize, based on the latest available data from 2013, but between 2009 and 2015 only about 700,000 did so each year. Even though the number of eligible people has been rising over the past several years, naturalization rates in the U.S. are low when compared to similar immigrant-receiving countries like Australia and Canada.

Research has shown that naturalization can have a positive impact on tax revenues, homeownership rates, earnings, and even the overall economy. A number of factors, such as the English language requirement and cost for the application, dissuade many people from taking the step.

The federal government is responsible for conferring citizenship, but there are multiple actors who help people get through the process. The White House Task Force on New Americans currently coordinates federal initiatives such as the Stand Stronger campaign and the Citizenship and Integration Grant Program. Localities are involved through efforts such as NYCitizenship in New York City and the Cities for Citizenship initiative, which includes 20 cities. Local nonprofit organizations provide application help, legal services, English language and civics preparation courses, and sometimes even pay the naturalization fee.

States are also playing a role in the naturalization process. The ten states with the highest numbers of individuals eligible to naturalize are Arizona, California, Florida, Illinois, Massachusetts, New Jersey, New York, Texas, Virginia, and Washington. These states are home to 76 percent, or 6.7 million, of the 8.8 million eligible to naturalize.

State-funded citizenship programs vary in their scope, capacity, and even target populations. Case studies of California, Illinois, and Washington illustrate the different approaches states have taken to support the naturalization process.

California, home to more than 25 percent of the nation’s eligible-to-naturalize population, was one of a number of states spurred by the 1996 Personal Responsibility and Work Opportunity Reconciliation Act to create a naturalization program. The Act restricted federal benefits for many noncitizens in the U.S. For example, certain legal immigrants who had been receiving federally funded benefits such as Medicaid and food stamps prior to 1996 would no longer be eligible for these programs and would need to become a citizen in order to continue receiving certain benefits.

California’s Naturalization Services Program (NSP), which operated from 1999 until 2008, assisted almost 120,000 people become citizens, and at the height of the program’s funding in 2000-2001, NSP operated with a $7 million budget.

Between 2008 and 2015, California did not commit state funding to naturalization efforts, but in 2015, the Legislature approved $15 million for One California, a program meant to provide legal assistance in support of applicants for both naturalization and Deferred Action for Childhood Arrivals (DACA). Out of the total, the naturalization application assistance component received $2.4 million and set a goal for 2016 to assist approximately 7,200 individuals, with about 5,500 individuals being served through workshops and 1,700 people served via direct representation. In July, the state approved 2016-2017 funding for One California to be $30 million, doubling the amount from the previous year.

In Illinois, which has 370,000 noncitizens eligible for naturalization, the recently approved stopgap budget deal does not include money for citizenship services. In the absence of state money, nonprofit organizations are struggling to pick up the slack.

From 1995 to 2012, the Illinois Department of Human Services funded the Refugee and Immigrant Citizenship Initiative (RICI), and between 2005 and 2015 it funded the New Americans Initiative (NAI) with an annual budget of $3 million. To run both programs, the agency partnered with the nonprofit Illinois Coalition for Immigrant and Refugee Rights (ICIRR). In 2015, NAI distributed the money to 48 community-based organizations that provided citizenship information and processing assistance to eligible applicants, according to senior director of programs Breandán Magee.

Since 2005 the NAI has helped around 105,000 people become U.S. citizens and has disseminated citizenship information to over 500,000 immigrants through direct outreach, phone calls, and ICIRR’s website. Despite the present lack of state funding, ICIRR is continuing to assist individuals through outside funding from nonprofit organizations. It is on track to process 1,500 naturalization applicants this year, compared to the 10,588 applications it processed last year with state funding.

Washington, a more recent immigrant destination, is home to 180,000 people who are eligible to naturalize. The Department of Social and Health Services, which coordinates the Naturalization Services Program, and the Department of Commerce, which oversees the New Americans Program, are responsible for Washington’s efforts. In 2015, the Naturalization Services Program assisted just over 3,000 participants with naturalization services, and spent roughly $500,000 of its $1.7 million budget to help people with the naturalization application.

Sarah Peterson of Washington’s Department of Social and Health Services explained how the Naturalization Services Program, which began in 1997, assists all low-income refugees and immigrants who are receiving public assistance and are eligible to naturalize. To do this, the Department of Social and Health Services contracts with 17 different nonprofit organizations and the city of Seattle to provide naturalization application assistance and civics and English instruction.

Since 2008, the funding for the broader New Americans Program has flowed through OneAmerica, a nonprofit which then sends the money to service providers in individual communities. In fiscal year 2015, the Washington legislature appropriated almost $400,000 for the New Americans Program, a 100 percent increase from the previous year.