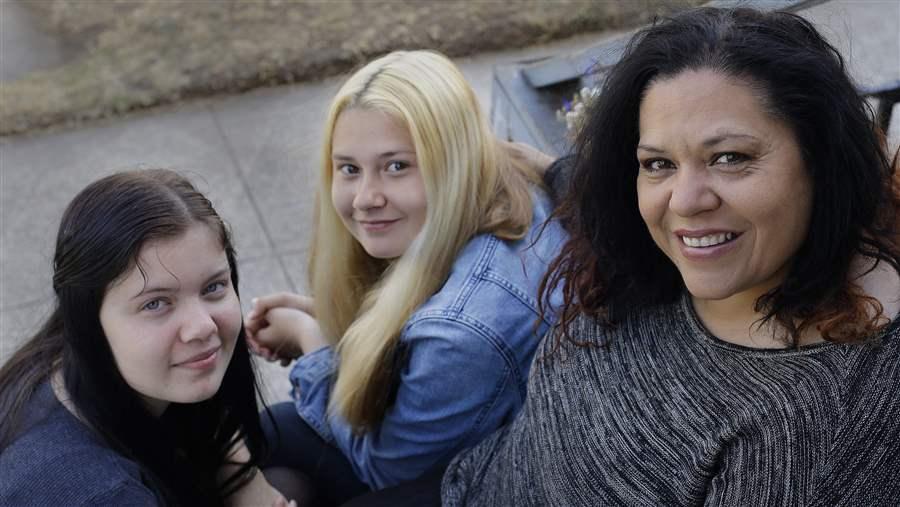 Vivian Thorp was a single mother of a 4-year-old daughter when she enrolled in California’s welfare-to-work program in 1999. Shortly after, Thorp met her fiance, who was also on public assistance. He struggled with mental illness. Sometimes they were homeless. Then Thorp got pregnant — and pregnant again.

Thorp was shocked to discover that she was not entitled to any more benefits for her two new daughters under California’s “maximum family grant rule,” which prevented women on welfare from receiving additional money if they had more children. Thorp found that her monthly welfare check of $520 wasn’t enough for three kids. Soon she was stealing food and diapers to get by.

“I’m still traumatized,” said Thorp, 50, who went off assistance in 2011 and now works as a legal advocate for the homeless. “These laws adversely affect our ability to rise up out of poverty. It’s shameful to deprive kids of basic things like food and clothing.”

Last month, California repealed its policy that caps aid for parents like Thorp who have more children while receiving cash assistance. Democratic Gov. Jerry Brown, who had once opposed the repeal, signed a budget deal that allocates $220 million a year in welfare assistance starting Jan. 1 for roughly 130,000 children born to women on welfare.

That makes California the seventh state since 2002 to repeal family cap rules enacted by 22 states during the 1990s and early 2000s, according to the Urban Institute, which has closely tracked the issue. Illinois, Maryland, Minnesota, Nebraska, Oklahoma and Wyoming have also repealed their family cap laws — often called welfare queen laws.

Last month, New Jersey lawmakers voted to repeal the state’s maximum family grant rule. But Republican Gov. Chris Christie vetoed the repeal. He said the caps provide for equal treatment of welfare recipients and other residents, “who do not automatically receive higher incomes following the birth of a child.”

The move to repeal family payment caps coincides with research that indicates the laws don’t reduce birthrates among those receiving Temporary Assistance for Needy Families (TANF). Researchers also have found that the rules are harmful to children, cause lifelong damage to their learning and development, and increase the “deep poverty rate” of children by 13 percent.

“There was clear evidence it didn’t have the impact they’d hoped it would have,” said California state Assemblyman Donald Wagner, a Republican who supported repealing the cap but voted against the budget because of other provisions he didn’t like. “This was a policy that was proven to be counterproductive.”

Laws capping the payments date to when states and the federal government implemented sweeping welfare reforms in the 1990s that restricted recipients to no more than five years of government assistance, and required most recipients to work, do community service or enroll in vocational training.

The idea was to discourage out-of-wedlock births and increase self-sufficiency. Typically, larger families receive more benefits. But critics said the rules relied on well-worn tropes of “welfare queens” cranking out babies to cash in on public aid. Family caps, they said, only served to further impoverish low-income families.

“This notion of people who were quote, unquote ‘milking’ the system is ridiculous,” said state Sen. Holly Mitchell, a Democrat who led efforts to repeal California’s cap. “I don’t know a woman — and I don’t think she exists — who would have a baby for the sole purpose of having another $130 a month. That makes no sense.”

New Jersey led the effort to cap payments, and was the first state to put a family cap on the books, in 1992. California voters that year rejected a ballot initiative that in part would have cut back on welfare benefits for families the longer they spent on welfare. But state lawmakers in 1994 approved a maximum family grant. Arkansas that year also enacted a cap.

As Congress was enacting sweeping welfare reform — eradicating the Aid to Families with Dependent Children program and replacing it with TANF in 1996 — a flurry of states were enacting caps on maximum family payments. By 2003, 22 states had caps in place, according to the Urban Institute.

At least 15 states — Arizona, Arkansas, Connecticut, Delaware, Florida, Georgia, Indiana, Massachusetts, Mississippi, New Jersey, North Carolina, North Dakota, South Carolina, Tennessee and Virginia — still have caps. Even if states have wanted to repeal them, many have struggled to do so because of tight budget constraints.

The caps vary from state to state — and some can be quite complex. In Arizona, for example, let’s say a family has a child while receiving cash assistance. If the parents go off welfare, and then later need to go back on, they will only be eligible to receive benefits for that child after five years.

But that may soon be a moot point. This month Arizona imposed the most restrictive welfare rules in the country. Families there can no longer stay on welfare more than 12 months — and that is a lifetime cap. A family of three with no income would receive no more than $278 a month.

On paper, Idaho doesn’t have a family size rule. But because the state caps welfare benefits at $309 no matter the size of the family, it has a de facto family cap.

In New Jersey, where public assistance grants haven’t increased in 29 years, a family of three receives $424 a month in cash assistance. If a mother has her second child after she started receiving welfare, her assistance would only be $322 a month.

Roughly 20,000 children in the state have been barred from receiving benefits since 1992 under the family cap rules, according to a February report by the New Jersey Policy Perspective, a think tank that focuses on policy issues in the state. Eight in 10 New Jersey children living in poverty do not receive any public assistance.

Raymond Castro, senior policy analyst with the think tank, said the intent of the family cap rule “was to coerce women into not having additional babies, to put it bluntly.”

“It didn’t have any effect on their birthing choices,” he said. “But it has a huge impact on impoverishing the child.”

The consequences women in California faced under the payment cap were sometimes stark, said Jessica Bartholow, a legal advocate with the Western Center on Law & Poverty, a California-based research and advocacy group that worked to get the cap repealed.

“The message to poor women was that they should not conceive and they should seek very permanent forms of birth control,” Bartholow said.

To preserve their benefits, some of her clients sought out sterilization, she said. One young woman testified before a California Senate committee that she begged her doctor to sterilize her after she became pregnant at 18 so that she could keep her benefits, but he refused to perform the surgery because she was too young. When her birth control failed and she became pregnant again, her infant son was not entitled to any benefits.

Under California’s cap, it took Thorp more than a decade to find economic stability and eventually get an associate degree and finally a bachelor’s degree.

She went on and off welfare. She fought the cap, appealed the ruling for her second daughter and eventually won. But that only added another $155 or so a month. She enrolled in all kinds of state vocational training programs. She would drop out of school for a while before picking up her studies again because, she said, she couldn’t afford transportation.

Thorp became an activist: she lobbied state legislators to repeal the cap. The safety net, she says, has too many holes. Her children still suffer from a host of physical ailments because of poor nutrition, she said.

“I did rise out of poverty,” Thorp said. “But unfortunately, I’m always a paycheck away. At any given time that things fall apart — jobs, the economy, whatnot — you can always be back out there.”