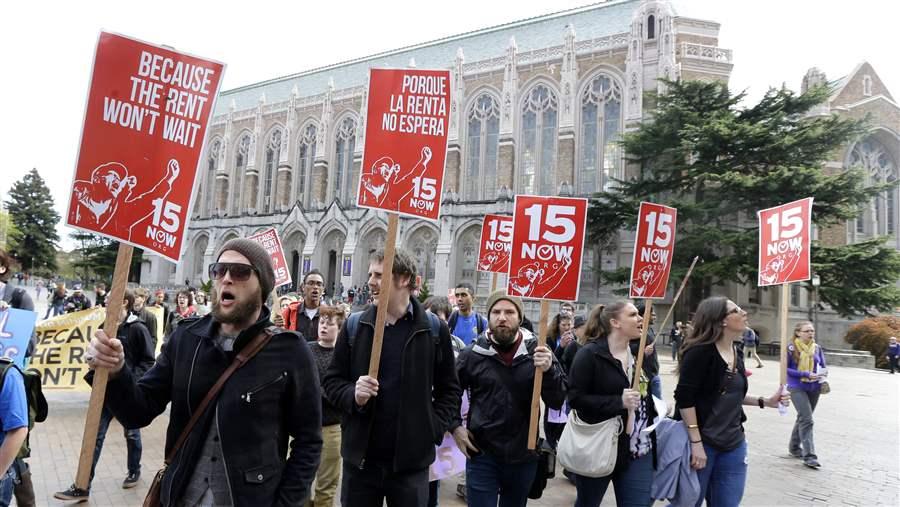 Supporters of a higher minimum wage demonstrate at the University of Washington in Seattle. In cities with higher percentages of educated young people compared to the state as a whole, policy battles with state legislatures have intensified.

From minimum wage hikes to bans on plastic bags, fierce city-state clashes are erupting in places where educated millennials make up a much larger percentage of the urban population than they do in the state as a whole.

In cities such as Atlanta, Seattle and Madison, the share of college graduates younger than 35 is roughly three times that of the state at large, according to a new Stateline analysis of census data. (The figures are for the voting-age population in each city and state.)

Overall, there are 20 large cities (more than 200,000 residents) in 16 states where the percentage of educated millennials is at least twice that of the state. They range from Cincinnati, where the respective percentages are 12.1 percent, compared to 6.2 percent for Ohio as a whole, to Madison, where the split is 20 percent to Wisconsin’s 6.5 percent. Other cities on the list include Columbus, Ohio; Minneapolis; Nashville, Tennessee; Orlando, Florida; Pittsburgh; and Portland, Oregon.

The only state with three cities on the list is North Carolina, where Durham (16.5), Raleigh (14.7) and Charlotte (12.5) all have educated millennial populations that are at least twice as large as the state’s 6.3 percentage. North Carolina has become a flashpoint in the city-state debate, attracting national attention in the process.

The most recent flare-up began in February, when the Charlotte City Council approved a law barring businesses from discriminating against gay, lesbian and transgender customers. Its most controversial provision would have allowed transgender residents to use either a men’s or women’s bathroom, depending on the gender with which they identify.

The so-called bathroom law outraged North Carolina lawmakers, who responded by approving a law prohibiting cities and other local governments from establishing their own anti-discrimination rules. The new state law also prevents cities from setting their own minimum wage laws, another frequent bone of contention between cities and states.

Durham also has run into state resistance. Last year, a last-minute budget amendment endangered its light-rail plans by taking away almost $138 million in promised funding, though Republican Gov. Pat McCrory is negotiating to get it back.

“There are many demographic shifts going on in North Carolina and across the country that worry and anger people in small towns,” Moffitt said. “They see the large urban centers growing and thriving, while populations in small towns are decreasing.”

Shortly before taking office in 2015, Republican Gov. Greg Abbott of Texas warned in a speech to a conservative think tank that Texas was in danger of being “California-ized.”

“This is being done at the city level with bag bans, fracking bans, tree-cutting bans,” Abbott said. “We’re forming a patchwork quilt of bans and rules and regulations that is eroding the Texas model.”

Abbott has railed against Austin’s plastic bag ban, though the state has yet to pass legislation to stop it. But there is a long history of Texas quashing Austin’s environmental laws, and Texas lawmakers last year reversed the city of Denton’s fracking ban with a law asserting state authority over oil and gas operations. In Denton, the percentage of educated millennials is 1.7 times larger than the state average.

States balking at funding for city projects is a common way for older, more conservative states to register protest, according to Ethan Schoolman, an assistant ecology professor at Rutgers University.

“Not providing funding is a kind of passive-aggressive way that states can say to cities, ‘You can have your pet issue but we’re not going to pay for it,’ ” Schoolman said. “The state can use the power of the purse to oppose or slow cities’ efforts at innovation — public transport, say, or infrastructure spending, or investments in alternative energy.”

Schoolman said recent college graduates are more attracted to sustainability and social justice issues because colleges and universities emphasize them.

“The influx of millennials to urban areas has coincided with increased emphasis on sustainability and environmental issues at [institutes of higher education] where college-educated millennials are spending significant time before starting their adult lives,” Schoolman wrote in a 2014 paper.

State Sen. Michael Baumgartner, a Republican from Spokane, earlier this year proposed what he called a Seattle quarantine on such increases. Baumgartner’s bill would prohibit cities from regulating private-sector wages, work hours or leave.

“In Spokane, we have a council trying to play ‘Mini-Me’ to Seattle progressives, but what flies in Seattle is often completely unrealistic for communities outside the progressive Seattle bubble,” Baumgartner said in a statement. “This is a simple check on city councils run by special interests and ideologues out of touch with the needs of the whole community.”

Meanwhile, Seattle is continuing to assert itself on economic issues. Washington state has a 35-year-old law against rent control, but Seattle’s City Council has asked for an exemption as rents have spiraled out of control in an overheated housing market. Even tenants in areas considered affordable have recently seen increases of more than $1,000 a month.

In September the City Council passed a resolution requesting more leeway from the state, saying residents face “rising housing costs that challenge Seattle’s future as an affordable and equitable city.” But the Legislature has shown no interest in giving the city its way.

“Do I hear any requests for rent control from my rural constituents? The answer is no. Not a thing,” said state Rep. Matt Manweller, a Republican who represents a hay-producing area east of Seattle.

“If people have a hard time finding a home, we build more houses. I would never vote for rent control — it creates more problems than it solves.”

Kshama Sawant, a member of the Seattle Council who favors rent control, said her urban district is younger, more educated and more left-leaning than the state as a whole. Washington state doesn’t track party registration, but the city voted 6-1 Democratic in 2014 Congressional races, according to King County election data, compared to an estimated 1.2-1 ratio of Democrats to Republicans statewide.

“Young people are more willing to demand changes to the status quo, but it’s also a matter of political outlook,” Sawant said. “There are plenty of college-educated young people in the state Legislature on the other side of this.”

But not all cities with large educated millennial populations compared to their states have experienced such conflicts. For instance, Jersey City, New Jersey, has more than twice the state’s share of educated young people — almost 20 percent versus 8.5 percent.

But the state’s home rule system gives cities leeway to set their own course in most legislation, said Edward Purcell, a staff attorney for the New Jersey League of Municipalities. For instance, a judge last year upheld the right of towns and cities to set their own policies on earned sick leave, dismissing a lawsuit by employers claiming only the state could set such rules.

And some issues scramble the normal calculus. In Madison and Austin, for example, battles over the regulation of ride-hailing services such as Uber split educated millennials.

“Millennials have a libertarian streak and a liberal streak — they want to be left alone but they also want government to do everything,” said Jon Russell, of the American Legislative Exchange Council, or ALEC, a free-enterprise, limited-government advocacy group that opposed tougher regulation of the ride-hailing companies.