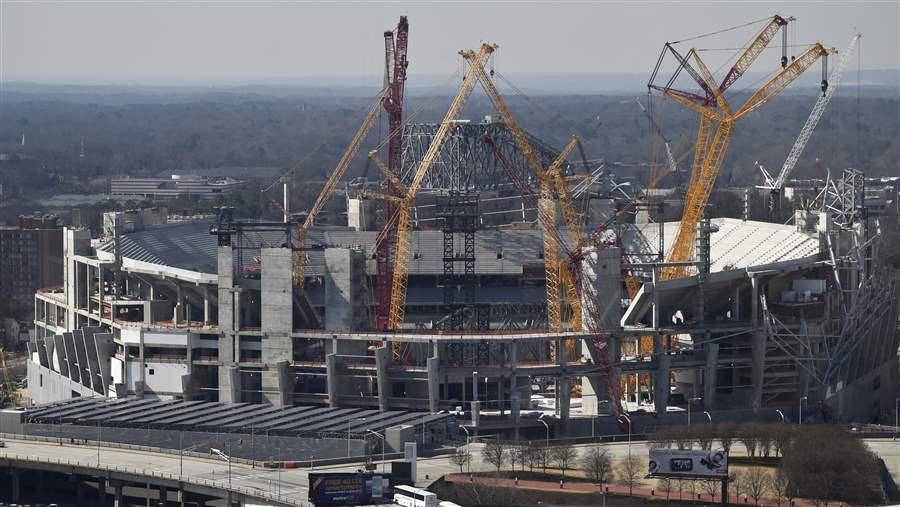 Mercedes-Benz Stadium, the new home of the Atlanta Falcons, under construction in Atlanta. Taxpayers are helping to pay for it.

Missouri and St. Louis tried mightily to keep the NFL Rams from decamping for Los Angeles, offering $400 million in state and city money for a new stadium. To justify the public expense, officials argued that the team, which moved from Los Angeles to St. Louis two decades ago, was an economic engine for the region.

They offered to put up the money even though the Rams’ billionaire owner, Stan Kroenke, could afford to build a new stadium on his own. Ultimately, Kroenke opted to do just that, announcing in January that he would spend $1.9 billion of his own fortune to build a new stadium for the Rams in Inglewood, southwest of downtown Los Angeles.

Two other NFL teams, the San Diego Chargers and the Oakland Raiders, also are eyeing a move to the nation’s second largest city. But Nevada is hoping to grab the Raiders for itself, by dangling a $1.4 billion stadium that would be paid for, at least in part, by the taxpayers. Meanwhile in Atlanta, construction is underway on a new $950 million stadium for the NFL Falcons, to be financed partly through bonds secured by extending a tax on hotel and motel rooms.

Amid all the jockeying, a decadeslong debate rages on: Does it make economic sense for cities and states to use public money to build sports facilities?

As soon as the Rams-Inglewood deal was announced, Moody’s Investment Service said the move would boost Inglewood’s sagging economy.

“The new stadium will likely inject thousands of jobs into the local economy during the construction phase, as well as many new jobs post-completion,” Moody’s said. Inglewood will gain $18.7 million to $28 million of new annual revenue over 16 years, according to Moody’s.

In Atlanta, where the city and Fulton County decided to direct proceeds from a 7 percent hotel-motel tax to pay the debt service on municipal bonds that are financing Mercedes-Benz Stadium, officials are predicting a similar impact. The NFL also selected the city and its future stadium to host the 2019 Super Bowl.

“Being honored with the [Super Bowl] is proof positive that public-private partnerships in the area of urban development can result in constructive outcomes,” Atlanta City Council President Ceasar Mitchell said in a statement in May, when the NFL selected the site. “I applaud the collaborative efforts of the leadership team that made this a reality and look forward to hosting Super Bowl 53 like only Atlanta can.”

But many economists maintain that states and cities that help pay for new stadiums and arenas rarely get their money’s worth. Teams tout new jobs created by the arenas but construction jobs are temporary, and ushers and concession workers work far less than 40 hours a week.

Furthermore, when local and state governments agree to pony up money for stadiums, taxpayers are on the hook for years — sometimes even after the team leaves town. St. Louis, for example, is still paying $6 million a year on debt from building the Edward Jones Dome, the old home of the Rams that opened in 1995, despite the team’s move to California. The debt is financed by a hotel tax and taxes on “game day” revenues like concessions and parking.

Jackson Brainerd, a research analyst at the National Conference of State Legislatures (NCSL), said the teams often hold up cities and states for sweet financing deals by threatening to move.

“Clearly major league professional sports teams are all fully capable of paying for stadiums themselves,” he said, citing Los Angeles.

Governmental entities have long used tax-free municipal bonds to finance infrastructure projects, including sports stadiums. Investors buy the bonds as a relatively risk-free vehicle to earn interest. Although the bonds generally pay lower interest rates to the buyer, they are attractive because of their tax-free status.

In his 2016 budget, President Barack Obama proposed getting rid of tax-free bonds to help finance stadiums, a practice that costs the U.S. Treasury $146 million a year, according to a 2012 Bloomberg analysis. Bloomberg calculated that the $17 billion in tax-exempt debt used to build stadiums since 1986 would cost taxpayers $4 billion. The idea, like most of Obama’s budget, failed to gain traction in the Republican-dominated Congress.

As far back as the Tax Reform Act of 1986, the government has tried to limit public financing of stadiums, arguing that the stadiums — unlike other publicly funded infrastructure like roads and bridges — only serve a small number of people and that rich team owners should foot the bill. The tax reform measure included a provision prohibiting direct stadium revenue — such as ticket sales or food concessions — from being used to secure more than 10 percent of the cost of the stadium.

The thinking was that the provision would force cities and states to find other sources of public revenue, like higher property taxes, hotel taxes or sales taxes, to finance stadiums, and that proposed increases in those taxes would get nowhere because politicians would be unwilling to anger citizens. But the law did not take into account the fan loyalty and pride that made new taxes politically acceptable, according to Dennis Zimmerman, a former Congressional Budget Office and Congressional Research Service analyst who is an expert on stadium financing.

“Congress thought putting this 10 percent rule in would kill it,” Zimmerman said. “Nobody would expect taxpayers to hand over huge subsidies to these sports centers. But they did.”

In a paper published in February, Moody’s said both the growing popularity of professional soccer and the return of the NFL to Los Angeles County are “important drivers” of the increase in professional stadiums. After a lull in building from 2011 to 2015, stadium construction is on the upswing. Twice as many new stadiums, 12, are forecast to be completed over the next three years as were completed over the last five years, six, the report said. And most have at least some element of public financing.

The value of bonds used to finance stadiums is influenced in part by how the team performs on the field. Better teams attract more fans, whose money is used to service the tax-free bonds.

One example is New York’s $850 million Citi Field, opened in 2009 with the help of $616 million in public subsidies, including New York state municipal bonds. The “Let’s go Mets!” cheers are louder at Citi Field lately, because fans are flocking to see a team that made a surprise run to the World Series last year.

The revenue from the healthy and growing number of fans led Moody’s Investors Service to upgrade the stadium’s bonds from a rating of Ba1, speculative and near “junk” status, to Baa3, a slightly higher rating that means the bonds are “investment grade.” They are therefore more attractive to investors in the resale market. If the state were to refinance the bonds, it would pay lower interest and the better investment grade would lure more buyers.

With the upgrade, the bonds crossed the bond market equivalent of baseball’s Mendoza Line, a derogatory term used for incompetent batters, usually those batting under .200.

“Ticket sales show performance today and performance in the future. If you make it to the World Series, every team but one in the last 14 years has experienced an increase in attendance of an average 10 percent,” said John Medina, vice president and senior analyst for Moody’s. (The exception was the San Francisco Giants in 2013, whose attendance dropped after winning the World Series in 2012.)

Across town, the new $2.3 billion Yankee Stadium, opened in 2009 with $1.2 billion in public money, also is considered a good investment (rated Baa2 by Moody’s). Because while the team has not played particularly well in the past few years, it is so solid and established that its fan base and ticket sales are reliable as a revenue source.

In most cases, fans’ spending on food, parking and luxury seat leases are included in bond rating criteria, but actual ticket sales are not.

But two IRS rulings specifically for the Yankees and the Mets made it possible for them to use ticket sales to secure bonds. (The Barclays Center in nearby Brooklyn, for example, home of the NBA Nets and NHL Islanders, can only use concessions, naming rights and premium seating to back up its bonds.) In addition, some stadiums have taxes on the tickets that are almost always used to finance public bonds for stadiums.

Richard Brodsky, a former New York state legislator who is now a senior fellow at New York University, said the fact that the Mets have a better team this year “is interesting in an academic way but it doesn’t get to the complaint that this is corporate welfare. The average citizen gets screwed.”

He bemoaned rising ticket prices, for example. MLB’s average ticket price rose 7.1 percent in 2016, according to a survey by Team Marketing Report, a sports sales and marketing company.

“Bond holders are happy, that’s fine; the people who are paying off the bonds are paying double what they used to pay for the same seats,” he said.