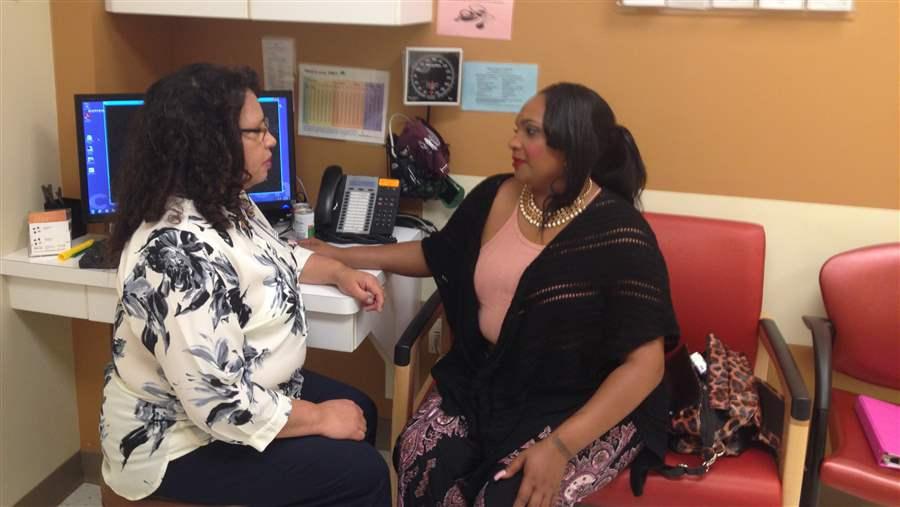 ROCHESTER, Minn. — Pay close attention to Tara Nelson as she chitchats with clients about their families, their pets, their hairstyles, their air conditioning, and you’ll detect the string of questions she slips in. Have you managed to get outside for walks? Did you eat lunch today? You missed a doctor’s appointment this week — how come?

Nelson is a community health worker connected to the Mayo Clinic here, and when she visits her clients’ homes it’s like two old friends catching up on each other’s lives. But Nelson is there for a specific purpose: to prod and to fish for any information that might help improve the clients’ health.

Many now recognize that providing good health care has to go beyond the doctor’s office — especially for minorities and low-income people. Limited access to healthy food, environmental perils, crime, insecure housing, insufficient recreational opportunities and the absence of affordable transportation all can have a huge effect on a person’s health.

These factors, often called the social determinants of health, are hard for clinicians to address during medical appointments. To contend with them, hospitals, community health clinics, public health agencies and some health plans are increasingly turning to community health workers like Nelson.

Thanks in part to federal grants awarded under the Affordable Care Act, the number of community health workers is growing. In 2015, there were 48,000 of them working in the U.S., up from 38,000 three years earlier, a 27 percent increase, according to the U.S. Department of Labor.

But many insurers still don’t cover their services, limiting their potential impact.

Medicare does not cover community health services, and neither do many private insurers. (Kaiser Permanente, United Health and Molina Healthcare, which operates in California and 10 other states, are some of the insurers that do.)

Many say the absence of reimbursement is shortsighted, since research shows that community health workers lower health care costs over time.

“It’s very obvious that reimbursement is the major barrier to use of community health workers,” said Alberta Mirambeau of the U.S. Centers for Disease Control and Prevention, who coauthored a 2013 paper exploring their cost.

Community health workers keep patients healthy and out of the hospital by overseeing their medications, arranging transportation to doctor’s appointments, and scheduling tests and vaccinations. That makes them a relatively inexpensive way to improve health outcomes.

Those who value community health workers hope reimbursement policies will change as the country moves toward a more outcome-driven health care system under the ACA.

“There’s more and more recognition among providers that if they are going to reach these quality indicators, community health workers are the ones who can help achieve them,” said Anne De Biasi, director of policy development for the Trust for America’s Health, an advocacy group.

Minnesota is one of only a handful of states (including Texas) that require special training for community health workers. But Dr. Onelis Quirindongo-Cedeno, a Mayo Clinic primary care doctor who works with Nelson and other community health workers, said that course work is less important than personal qualities like empathy, commitment and life experience.

“A lot of us have struggled with food and housing and transportation just like our patients have,” said Amy Smith, a community health worker at HCMC. “We understand their struggles and know what it takes to come out the other side.”

That shared experience points to one of the most valuable assets a community health worker can have, said Carl Rush of the Project on Community Health Policy and Practice at the University of Texas-Houston’s Institute for Health Policy.

“For a low-income population, there is a power differential between patient and provider that the provider is not in a good position to try to resolve,” Rush said. Often, he said, patients will confide important health information to community health workers that they’d feel intimated or ashamed to reveal to their doctor or nurse.

“Because we can spend more time with them and don’t wear white coats and can talk to them about more than medical things, they confide in us,” said Shawn McKinney, a community health worker at HCMC’s Whittier Clinic.

“They’ll say, ‘I’m not taking my medicine’ or that they didn’t follow what the doctor told them, things that they’d never tell the doctor. Then we can work through it together.”

On a beautiful early summer day, Tara Nelson navigates her sturdy Kia Forte along Rochester streets from one home visit to another. First she helps a recently divorced Mexican immigrant and mother of four boys clear up an insurance snafu that has taken Nelson months to unravel. The mix-up had left the woman with a $69,000 medical debt she had no chance of repaying.

Next, Nelson dropped off a doctor’s note at an assisted living facility that had refused to allow an elderly patient of hers with multiple chronic illnesses to receive visits from her beloved dog. She had gotten a statement from a doctor saying that the patient’s Maltese Shih Tzu was a “therapy dog” — relieving anxiety and depression. The 84-year-old woman smiled broadly when she heard the news, her eyes filling with tears.

Finally, she visited Linda Kerrigan, a 62-year-old woman, also with multiple illnesses, who lives in a public housing tower for those with disabilities. Kerrigan had suffered several falls from her bed at night. Nelson had repeatedly dropped by and left messages for a medical device supplier in town, trying to see if they would donate bed railings for the woman. But Nelson never found the place open and her calls went unreturned. Today, after helping Kerrigan fill out some disability forms, Nelson asks her if she’d be open to a prescription for a hospital bed. The woman agreed.

“I couldn’t even imagine my life without her,” Kerrigan said of Nelson.

For her part, Nelson said that after working as a security guard, a day care operator and a prison investigator, she knew this was the work she was meant to do. But, she said, it’s not for everyone. “You have to have the right kind of heart to do this job.”