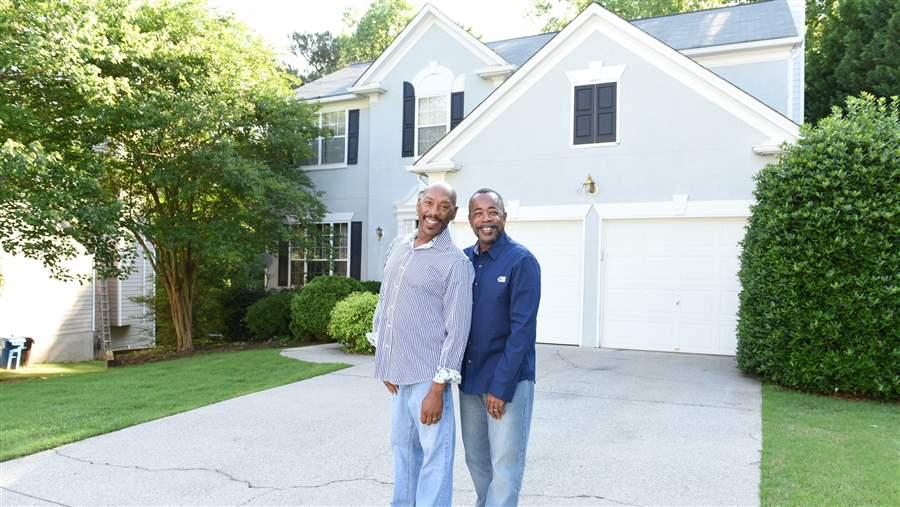 Stewart Nelson-Reid and Malcolm Reid at their home in Alpharetta, Georgia. Like many Americans, the couple hasn’t saved enough for retirement.

This story has been updated to correct the number of states with retirement programs, and details about the Massachusetts program.

ALPHARETTA, Ga. — Malcolm Reid and Stewart Nelson-Reid, both 58, have been together for 18 years. They’ve had a blast — traveling, skydiving and riding roller coasters around the country.

What they haven’t done is save much money for retirement. For years Malcolm Reid, a manager at AT&T, contributed only a small amount to his 401(k). His spouse, a freelance makeup artist, has no retirement fund.

“I don’t know what we were thinking,” Reid said. “We were spending money like crazy. We traveled. We bought clothes. We ran up credit card debt. Now, we’re watching every penny.”

They aren’t alone: A recent federal report found about 55 percent of households with workers between 55 and 64 have less than $25,000 in retirement savings. Malcolm Reid has saved a bit more than that — $38,000 — but far less than what he’d need to support himself during a retirement that might last decades.

For many Americans, a major barrier to saving more is that their employers don’t offer a retirement plan. Between 2010 and 2014, 42 percent of full-time, private sector workers between 18 and 64 — about 30 million people — did not have access to an employer-sponsored plan, according to a study by the Pew Charitable Trusts (Pew also funds Stateline).

To fill the gap, since 2012 at least 31 states have considered setting up state-sponsored retirement savings plans for private sector workers, according to Pew. This year, legislators in more than a dozen states introduced bills. 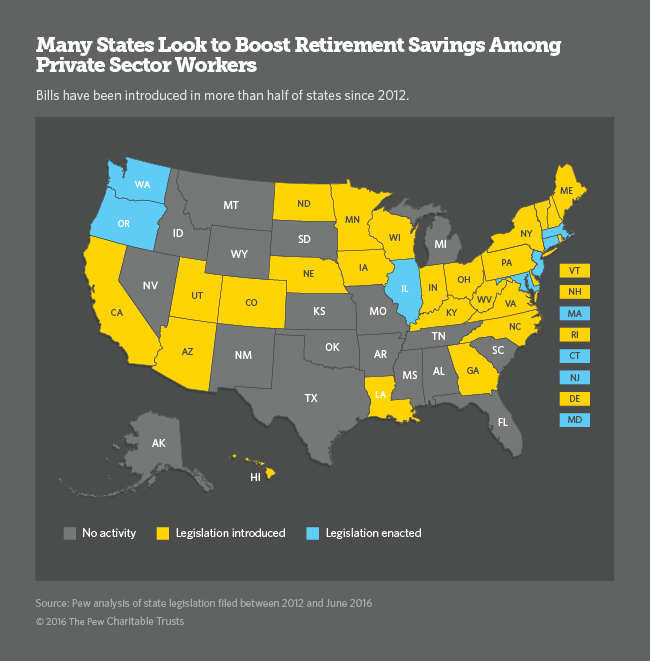 Seven states have approved state-sponsored retirement programs for private-sector workers. In Massachusetts, the treasurer would handle contributions and investments for the voluntary program, which would be only for small nonprofits.

Connecticut, Illinois, Maryland and Oregon have approved mandatory programs in which a small percentage would be automatically deducted from an employee’s paycheck and put in an IRA in a financial institution, although the person could opt out. Employers would play a minimal role, providing information about the program to workers and sending payroll deductions to the state, but not offering financial advice or assistance. None of the programs require employers to match employee contributions.

Under Maryland’s program, employers that don’t enroll their employees must pay a standard $300 filing fee. But there is no penalty for failing to participate in the program.

New Jersey and Washington state have adopted a “marketplace” model, in which the states would create an online exchange and set basic standards for eligible retirement plans.

The states would rely on the existing private market to provide the plans, as well as help educate small businesses about their options and encourage them to offer one to employees. Participation would be voluntary for small businesses and employees.

In Illinois, which hopes to launch its program in June 2017, businesses with at least 25 employees that don’t offer retirement plans would be required to participate. Employees would be enrolled unless they opt out, and 3 percent of their wages would be placed in a Roth IRA, although they could change the percentage.

“Workers who lack access to retirement savings options need and deserve help. The number of families and workers who are in trouble is just terrifying,” said Democratic state Sen. Daniel Biss, who sponsored the measure, which passed in 2014 on a party-line vote, with only one Republican voting in favor.

AARP, one of the biggest boosters of state-sponsored retirement funds, says auto-enroll programs like the one in Illinois will best help retirees become more financially secure.

Baby boomers, Americans between the ages of 52 and 70, are in especially dire straits. More than four in 10 will not have enough income to support themselves when they call it quits, according to a report by the Employee Benefit Research Institute (EBRI), a nonprofit, nonpartisan think tank based in Washington, D.C.

Many companies no longer offer pensions, as they did when boomers’ parents were in the workforce. Nearly 30 percent of households age 55 and older have no money saved in a 401(k), IRA or pension.

And some boomers who did try hard to save dipped into or drained their retirement accounts to buy or repair their house or pay medical bills or college tuition; some lost jobs during the recession. “A tremendous number of people aren’t ready,” said Jack VanDerhei of EBRI. “It’s a serious problem.”

The AARP’s Madrid-Davis said younger Americans will benefit most from the state efforts to set up retirement savings programs because they’ll have more time to accumulate savings. But the programs would help boomers, too. Many are expected to work well past traditional retirement age. The Bureau of Labor Statistics projects that by 2024 nearly 22 percent of those 65 and older will be in the labor force, compared to 12 percent in 1994.

“These programs are hugely important to boomers,” Madrid-Davis said. “Most of them don’t have pensions like people used to and a good number have nothing saved for retirement.”

She said AARP prefers that states create auto-enroll programs because many employees forced to put a small percentage of their savings into a retirement account won’t bother to opt out. “It’s trying to get inertia to work in people’s favor,” she said.

And the programs would save tax dollars down the road, Madrid-Davis said. “The states know at the end of the day, if you have a large number of retirees who don’t have the financial resources, they’ll need support with health care, housing and food that generally comes from local and state government. Ultimately, the states will be the ones footing the bill.”

The financial services industry and some groups representing small businesses, such as the National Federation of Independent Business, have opposed much of the legislation to create mandatory auto-enroll retirement savings programs.

Many of these critics say they support efforts to educate workers about saving for retirement, but they don’t think states should force employers to offer plans. Some say it will create administrative and regulatory burdens on small businesses.

John Mangan, a regional vice president for the American Council of Life Insurers, which represents financial companies that offer 401(k)s and annuities, said employers already have access to a “vibrant market” if they want to offer retirement plans. “They can work and will work for employers who have the time and energy to get a plan in place,” he said.

Mangan said mandatory auto-enroll programs would create an unlevel playing field, especially if they are exempt from the federal Employment Retirement Income Security Act, which sets out strict rules and standards for private-sector employers and retirement plans and provides financial protections for workers. That would mean plans that are part of the state-sponsored program wouldn’t be subject to the same requirements as other employer-sponsored plans.

“We’re not afraid of fair competition. We face that every day,” Mangan said. “Our concern is that states are proposing to operate a plan under different rules than we operate our plans under.”

Mangan said his group prefers the marketplace model adopted in Washington state. “It’s completely voluntary for employers and taps into an existing private marketplace,” he said. “It attempts to connect private providers to small employers who need a plan and might not know where to turn.”

In California, the state Chamber of Commerce is opposed to a mandatory auto-enroll bill under consideration, unless it is amended. The measure was approved by the Senate last month and is awaiting action in an Assembly committee.

Marti Fisher, a chamber lobbyist, said her group is worried that employers won’t be protected from liability.

“A small-businessperson may inadvertently make mistakes in the way they administer their responsibilities under the plan or the way they interact with employees and then they could be liable for any losses or problems that occur,” she said.

Fisher said her group also is concerned about the program’s costs. A recent analysis estimated California would need to borrow $134 million from its general fund for a startup loan. The loan would then be repaid using a trust fund supported by employee contributions.

“We think the cost to develop the infrastructure to administer this brand spanking new program is going to be fairly large,” Fisher said. Employees may wind up being “very disappointed in their returns,” she added, because the startup and administrative costs would come out of their investment funds.

Some critics of auto-enroll programs question how much employees will be able to save, if just a small percentage of their paycheck goes into an IRA. Research has shown that a 3 percent automatic contribution would have only a modest impact on their long-term savings.

But the AARP’s Madrid-Davis said any savings is better than none, and some programs allow for an automatic hike in employee contribution rates over time, which would help nest eggs grow.

“You can really build a great state program,” Madrid-Davis said. “And if you build it, they will come.”