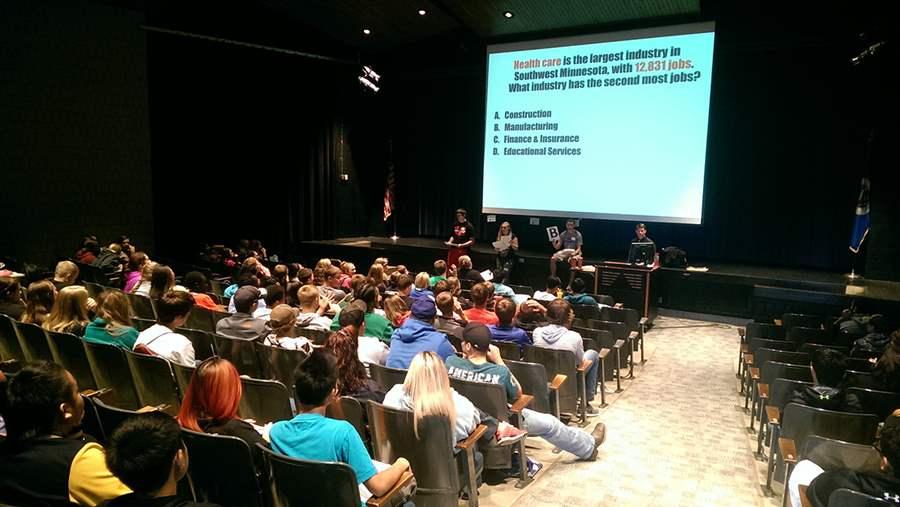 When Luke Greiner quizzes high school students about Minnesota’s labor market, there’s one question that always stumps them: What college major — and type of degree — leads to the highest salary two years after graduation?

“Students pick chemical engineering, anything with computers,” said Greiner, who works for the Minnesota Department of Employment and Economic Development (DEED).

The correct answer? A specialized plumbing and water supply program.

Many states, driven partly by people’s anxiety over whether a college degree is worth the cost, now track the early career wages of residents who went to college in the state. Minnesota is one of the few states that goes beyond posting the data online and deploys staff like Greiner to share it with students, counselors, college administrators and industry groups.

Today more than half of states have matched higher education and employment information, according to the Workforce Data Quality Campaign at the nonprofit National Skills Coalition. Arkansas, Kentucky, Minnesota and Maine are among the states that legally require the publication of post-college employment and earnings data. The federal government released its College Scorecard, a consumer information website, in 2013.

Outreach like Minnesota’s is becoming more common, says Rachel Zinn, director of the campaign. After all, part of the reason why states have linked education and earnings data is to help people choose what to study and where.

Last month, for instance, Colorado and Tennessee unveiled user-friendly websites developed by the American Institutes for Research, the U.S. Chamber of Commerce Foundation and Gallup. The Chamber of Commerce Foundation has enlisted local chamber branches to share the tool with businesses, schools and colleges. Minnesota’s Department of Education is working on a similar website and partnership.

Greiner, 29, says he wants to prevent young people from making the same mistake he did. He cycled through colleges and majors for years before earning a bachelor’s degree in management in 2012. He says he could afford to meander because he went to college using tuition assistance for active-duty personnel and the GI Bill. But many of his friends are now struggling under significant student debt.

What the Data Show

Greiner says he knew almost nothing about higher education when he was growing up in rural Minnesota. He knew he wanted to enlist in the military. After that? “I was sort of hoping to farm,” he said.

He says the students he meets today aren’t quite as clueless as he was. Take the careers class he recently visited at Worthington High School, near Minnesota’s Iowa border. The teacher, Lorna Kruger, isn’t sure whether she found the state’s online career data first or whether her students did during their research for the class.

Greiner showed the class how to navigate the state’s interactive Graduate Employment Outcomes website, known as the GEO tool. The website launched in 2014.

The data system, like most such state systems, was financed by a federal grant and connects data colleges provide with state unemployment insurance records. The data is made anonymous and aggregated so it can’t reveal an individual student’s path.

Users can search the GEO tool for the earnings and industries associated with any program or institution. For example, budding journalism majors hoping to earn a bachelor’s degree at a college outside the Twin Cities can learn that earlier cohorts with journalism and communications degrees earned a median salary of $39,000 three years after graduation. Most of them ended up working in retail jobs.

More technical programs generally have a greater payoff in the labor market. If our journalism major instead chose an associate’s degree program and learned to repair industrial equipment, she could be earning $58,000 three years out of school.

Greiner tries to impress upon students that they should pick a career first and shape their education around that goal. “I really try to show [students] that — when you’re trying to find your path, if you pick the right program it really doesn’t matter how long you go to school for,” he said.

State data systems that track post-graduate employment rates have their limits. Only a handful of states include student debt information, for instance.

State unemployment insurance data doesn’t capture freelancers, independent contractors, federal employees or people who’ve moved out of state. This gap can be a sticking point for selective universities that recruit students from far and wide and don’t expect them to stay local.

The University of Minnesota hasn’t fully explored the GEO tool and so has nothing to say about it, according to a representative. But a spokesman for the University of Colorado told the Denver Post that Colorado’s new website was “just not complete.”

Alessia Leibert, a project manager for DEED, says most Minnesota graduates remain in the state. “Other states have much more porous boundaries,” she said. Some states, including Minnesota, have joined a foundation-funded effort to share data in order to capture employment and earnings data for more graduates around the country.

Tools like the GEO tool also raise philosophical questions. Zinn said that her group doesn’t want people to only focus on wages. “It’s a really important data point, but it’s not the only reason to go to college,” she said. She noted that some occupations society needs, like social work and teaching, don’t pay well.

Students should at least know their career options, said Jaimie Francis of the Chamber of Commerce Foundation. Before the launch of the Colorado website, she attended a focus group with some high school students. One teenage girl expressed interest in the arts and musical theater.

Using the website was an “eye-opening experience” for the student, Francis said. Some Colorado theater majors with a four-year degree end up earning less than peers with a high school diploma, according to state data. The student, who will be the first in her family to go to college, later said that she still wants to follow her passion. But she might double major and add more job-friendly coursework to her resume.

Kruger says that in her careers class, she tries not to push students in any particular direction. “It’s really important for me to only teach and not share opinions,” she said. Some students aren’t yet mature enough to make a reasoned choice. But often, when students give their final presentations, Kruger said she’s impressed by how many have researched careers that would suit them perfectly.