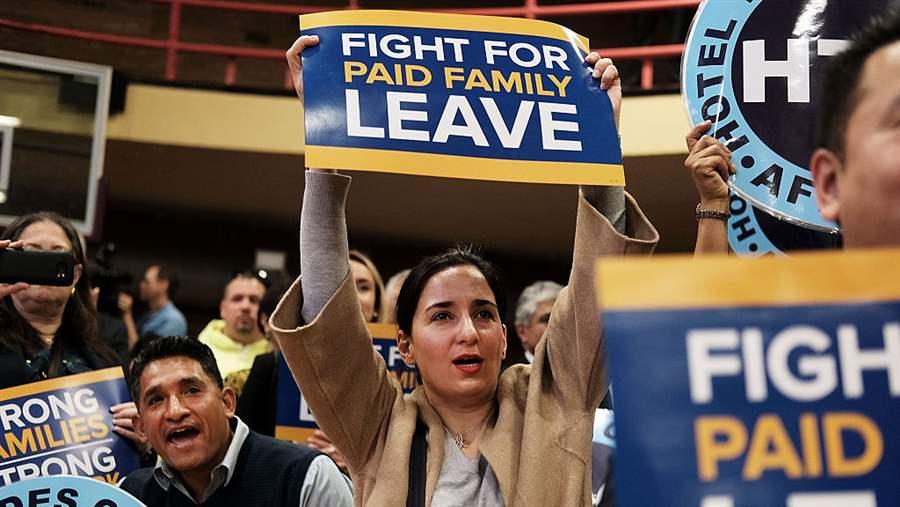 Supporters watch as New York Gov. Andrew Cuomo promotes his paid family leave initiative at a rally in Manhattan. States have struggled to enact such laws.

This story was updated to correct the spelling of Frank Cania's name.

Early this year, in his State of the State address, New York Gov. Andrew Cuomo got personal: He confessed that he “kicked” himself every day for not spending more time with his father when he was on his deathbed. And then Cuomo made his pitch: “We should have a paid leave program.”

A few months later, the Democratic governor signed a budget deal that included the most expansive paid family leave law in the country. The program, which will be funded through employee payroll tax deductions, provides workers with 12 weeks of paid time to care for an infant, a newly adopted child or a family member who is seriously ill. That’s at least double the time offered in other states with paid family leave laws. The New York program, which will be phased in over four years beginning in 2018, can also be used by military families facing deployment.

The U.S. is the only industrialized country without a national paid family leave program. Advocates say that although paid family leave laws apply to both men and women, they are particularly beneficial to women, who are most likely to bear the responsibility for providing care. With paid family leave, women are more likely to remain in the workforce and thus less likely to resort to public assistance and food stamps.

The federal Family and Medical Leave Act (FMLA), which passed in 1993, only guarantees workers up to 12 weeks of leave each year, but without pay. The law applies to less than 60 percent of workers. And many employees who qualify can’t afford to take time off without pay.

A federal paid family leave proposal is stalled in Congress. And though many states are exploring the idea, only three states besides New York have enacted paid leave laws: California (2002), New Jersey (2008) and Rhode Island (2013).

These states have one thing in common: Except for Hawaii, they are the only ones that have Temporary Disability Insurance (TDI) programs, through which paid family leave benefits may be paid.

Having a TDI system in place makes it much easier — and less expensive — to set up and administer family leave plans, said Vicki Shabo, vice president of the National Partnership for Women & Families, an advocacy group that focuses on workplace fairness issues. Without a TDI program, even states that end up approving paid leave legislation may have a hard time implementing it.

For example, legislators in Washington passed a law in 2007 that granted parents with a new child a weekly stipend of $250 for up to five weeks. Then the recession hit, and state revenue plummeted. In the years since, the state has twice delayed implementing the law, citing funding and administration issues.

“You need to create computer systems, you need a way to make payroll deductions and calculate benefits for employees,” Shabo said. This can cost states “tens of millions.”

A Flurry of Activity

Still, there was a flurry of activity on the issue in multiple states during the legislative session. Minnesota, Connecticut and the District of Columbia all have family leave measures that are advancing, and legislation was introduced in a half-dozen states.

Originally, the D.C. law, introduced last year, would have been the most generous law in the country, offering D.C. residents employed in the District up to 16 weeks of paid leave. But as City Council members have worked on a draft of the legislation, the proposed leave has been cut to 12 weeks. The program would be funded by an employee payroll tax.

The Minnesota Senate passed a paid family leave bill in May, but it won’t likely become law this year as there is no companion bill in the House. The measure, which was passed as part of a tax bill, would provide workers with up to 12 weeks of partial replacement wages. Both employees and employers would support the fund by a payroll tax.

In Connecticut, a Senate committee approved a paid leave bill in March. Under that proposal, employees would pay into a trust fund through a payroll tax. Eligible workers would receive up to 12 weeks of compensation and would receive 100 percent of their average weekly earnings from the previous year, up to $1,000.

In other states, the debate is in a more preliminary stage: Though legislators in Hawaii, Illinois, Indiana, Missouri, Oklahoma and Vermont introduced paid family leave bills, none advanced out of committee.

In Hawaii, Illinois, Oklahoma and Vermont, the plans would be paid for by employee contributions. Under the Indiana proposal, both employers and employees would pay into the system. In Missouri, a Senate bill relies on contributions from employees, but a House bill would have employers pay.

With the exception of Hawaii, which already has TDI, the states would need to build a system to administer the leave.

The California law increases the level of benefits from 55 percent of the worker’s salary to 60 to 70 percent, depending on their income level. The law also removed a seven-day waiting period before which employees were eligible for the paid leave. California workers get up to six weeks of paid leave.

In the past year, legislators around the country have become more interested in paid family leave, said Sarah Jane Glynn, director of women’s economic policy at the Center for American Progress, a liberal think tank in Washington, D.C.

“There is a growing recognition among working families that this is something that they need,” Glynn said. “And as baby boomers get older and older, this is going to become a more pressing issue for families.”

Some states, such as Massachusetts, Montana, Rhode Island and Washington, have taken advantage of grants from the Department of Labor to study ways to start family leave programs.

But business groups typically oppose paid leave laws. They say the laws place undue burdens on employers, even if they don’t have to chip in to pay for the leave.

“The idea that this is a free benefit that’s not going to cost anybody anything is silly,” said Jack Mozloom of the National Federation of Independent Business.

Eventually, Mozloom said, states will shift the costs onto employers and make them, rather than employees, pay into the fund.

Furthermore, small businesses such as hair salons and automotive shops can’t afford to go for weeks with a worker out on leave. They will incur extra costs if they have to hire temporary workers to pick up the slack, said Frank Cania, president and managing partner of DRIVEN HR, a Fairport, New York-based human resource consulting firm.

As Cania sees it, there are other complicating factors for New York businesses trying to comply with the new law. Under FMLA, workers must have been on the job for at least 12 months and have worked 1,250 hours the previous year to qualify for unpaid leave. But with the New York law, full-time workers only have to be on the job for six months to qualify — six months before they’re eligible for unpaid leave under FMLA.

“If you’re not providing good benefits, employees are going to move on,” Cania said.