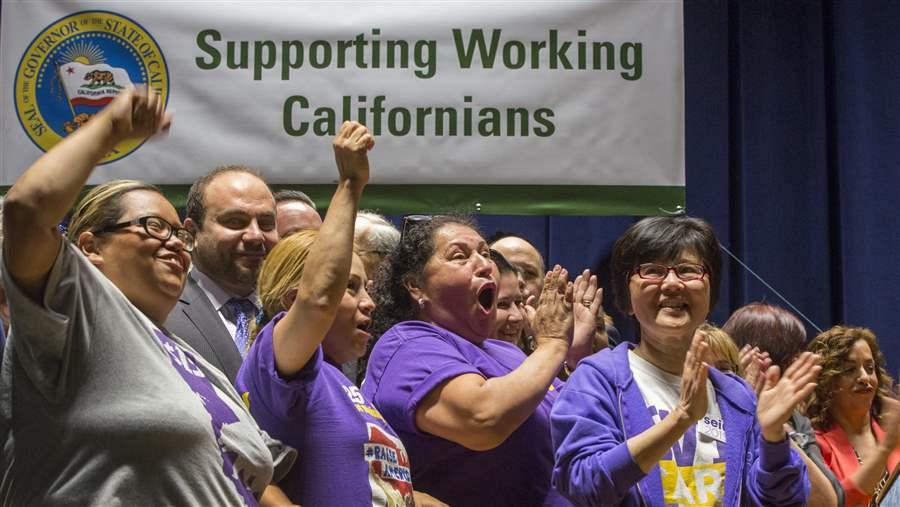 Union workers in Los Angeles cheer a new law that will gradually raise California’s minimum wage to $15 an hour. Many states that raised their minimum wages this year took a cautious approach.

Driven by a recovering economy and concerns about income inequality, many states and localities this year significantly raised their minimum wages, but most enacted gradual, multiyear hikes and some loaded the raises with caveats and conditions.

In taking action, states and localities leapfrogged the federal minimum wage, which has been stuck at $7.25 since 2009.

In the past, states and cities tended to enact minimum wage increases over one or two years. Now, many are incrementally raising workers’ pay over as many as six years. Many also are setting different pay rates for small and large businesses, or regions delineated based on their cost of living. Some of the increases include so-called off ramps, which allow states to delay scheduled hikes if there is an economic or budgetary crunch.

Most states have put the Great Recession behind them, but memories of anemic tax revenues and slashed budgets still haunt state lawmakers, and fears about the next downturn are growing as the country’s economic expansion enters the traditional danger zone.

“This expansion has already been going seven years,” said Sylvia Allegretto of the Center on Wage and Employment Dynamics at the University of California, Berkeley. “We don’t go much more than 10 years without a recession, so that’s why they have to take this into account.”

This year California and New York, liberal-leaning states with expensive cities and cheaper rural areas, led the way. Those states raised their minimum wages higher than any other, and were the first to tie scheduled increases to fiscal and economic conditions. States, in turn, were led by cities, many on the West Coast, which had raised their minimums earlier this year or last year.

In California, Gov. Jerry Brown and legislators were spurred in part by a looming statewide ballot measure that seemed certain to pass. The ballot proposal would have increased the state’s $10 minimum wage by a dollar a year to $15 in 2021. But it would not have tied the increases to fiscal or economic conditions, and did not distinguish between large and small employers.

The law also allows the governor to pause the scheduled increases if the state’s budget tightens or the broader economy falters.

Had the wage been lifted through referendum, under California law it could only be lowered by referendum. There were worries both in the governor’s office and in the Legislature about what would happen in an economic slowdown.

“It made sense for the Legislature and the governor to get this work done ourselves,” said state Sen. Mark Leno, a San Francisco Democrat who chairs the Senate budget committee and has sponsored numerous minimum wage bills. Leno also owns a sign-making company.

“I think it is a sustainable model and should give some level of comfort to employers, in particular smaller employers, who fear their inability to bear additional costs in an economic downturn.”

Under the new law, the governor will receive an economic assessment every August and will decide the following month whether the next scheduled increase should go into effect. Factors going into that decision will include job growth, sales tax revenue and retail sales, said California Department of Finance Director Michael Cohen.

New York Gov. Andrew Cuomo signed a bill, also in April, that will gradually raise New York’s $9 minimum wage to $15. Employers in New York City with 11 or more employees will reach that level in 2018, and city employers with 10 or fewer workers will do so in 2019.

As in California, New York can pause its hikes beginning in 2019 if budget officials determine the state’s economy is in trouble. And under New York’s plan, suburban and rural parts of the state will have longer phase-in times and more opportunities to delay the increases. Suburban areas will reach the $15 threshold in 2021. In rural areas the wage will hit $12.50 an hour in 2020 and be tied to inflation until it reaches $15.

In the District of Columbia, lawmakers last week approved a bill, backed by Democratic Mayor Muriel Bowser, which will lift the $10.50 base wage to $15 by 2020. It was already scheduled to go up to $11.50 in July. After 2020 annual increases will be tied to inflation.

“We know when you have federal inaction for long periods of time, which we’ve had, we do see we’ve had an increased activity on the state level,” Berkeley’s Allegretto said. “States like California where there is a high cost of living tend to move first.”

According to the National Conference of State Legislatures, 14 states began 2016 with higher minimum wages than the year before. Of those, 12 states increased their rates through legislation passed in the 2014 or 2015 sessions and two others automatically increased their rates based on the cost of living. At least 29 states, plus D.C., now have minimum wages above the federal level, according to NCSL.

Of the 11 states that currently tie increases to the cost of living, eight did not increase their minimum wages in 2016, NCSL said. Colorado called for an 8-cent increase and South Dakota a 5-cent increase. Maryland ($8.25), Minnesota ($9 for large employers and $7.25 for small employers) and D.C. ($10.50) have additional increases scheduled for this summer. Nevada will announce in July whether there will be a cost of living increase to its $8.75 minimum wage.

Last week the New Jersey Legislature also approved a gradual increase in that state’s $8.38 minimum wage to $15 in 2021. But Republican Gov. Chris Christie has pledged to veto it, calling it a “reckless” effort that would destroy jobs. New Jersey labor advocates are already preparing for a state referendum to increase the wage this fall.

State Sen. Stephen Sweeney, a Democrat and advocate for the wage hike, noted that in 2013, New Jersey voters approved a ballot measure increasing the state’s $7.25 wage by $1 and tying future increases to inflation. He expects that would happen again. Unlike New York and California, the New Jersey bill did not distinguish between large and small employers or geographic areas.

“We didn’t do that for one reason — every time you turn around someone wants to be exempted out of it,” Sweeney said. “If you exempt everyone out of it, there’s no reason to do it.”

He argued, as many economists have, that increasing the minimum wage is a boost to the economy rather than a drain, as business groups argue, because those who earn higher wages at the lower end of the scale tend to spend rather than save. In addition, when low-income people start earning more they often can opt out of government-run anti-poverty programs, helping the state’s bottom line as well, he said.

A 2016 study on the effects of increasing the minimum wage in San Jose and Santa Clara County, California, by the left-leaning Center on Wage and Employment Dynamics at Berkeley, projected the higher wage costs for business would be absorbed through “improved productivity, reduced worker turnover, and modest price increases.” The net effect on employment growth would be “very slightly negative” at the city and county levels, but nearly zero when spread over the encompassing region, according to the study.

But right-tilting think tanks suggest the effects of wage hikes on employment would be much worse. In a paper for the Mercatus Center at George Mason University, research fellow Adam Millsap wrote that a proposed minimum wage increase in Baltimore might help “some people who are able to keep their job at the higher wage, but for the 40 percent who can’t find a job at the current minimum wage of $8.25, an increase to $15 is only going to make the task harder, if not impossible. Who is standing up for these people?”

In addition to New Jersey, at least six states — Arizona, Colorado, Maine, Ohio, South Carolina and Washington — are qualifying minimum wage questions for the November ballot, according to Ballotpedia, a nonprofit that tracks initiatives and referendums. South Dakota is working on a referendum to lower the minimum for younger workers.

The deadline for submitting signatures is in July for Arizona, Ohio and Washington. Colorado has an August deadline. Maine and South Dakota advocates have already qualified for the ballot. The South Carolina question is “advisory.” If passed it would advise the Legislature to lift the wage by $1 over the federal minimum.

“It’s a banner year, and they are perennially popular,” said Jason Swadley, state desk editor at Ballotpedia. “All signs point to at least some states passing the ballot measures this year.”