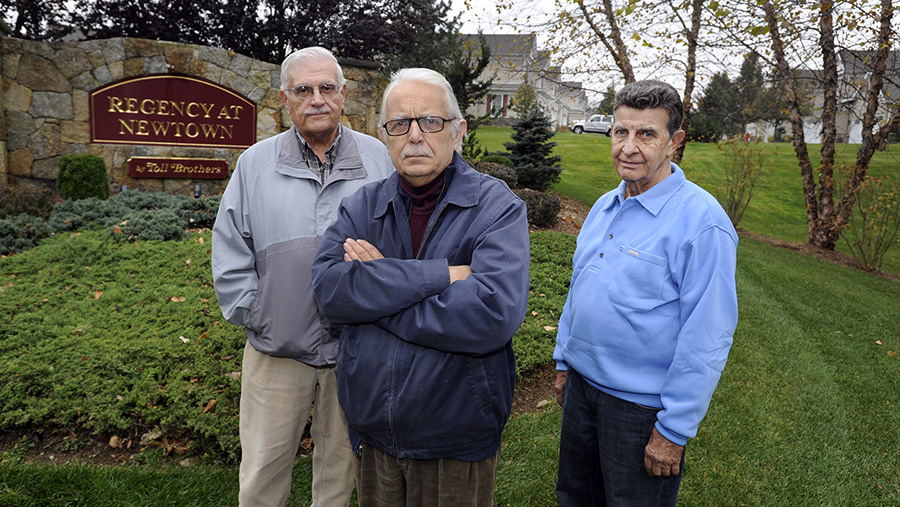 Louis Carbone, Rudy Magnan and Rocco Miano stand in front of their adults-only community in Newtown, Connecticut. Their Newtown League of Senior Voters protested tax hikes and pushed for more money for senior services instead of schools.

Rudy Magnan was shocked when he learned, a few years ago, that he’d have to pay $2,000 more in property taxes for his two-bedroom condo in an adults-only community in Newtown, Connecticut.

So Magnan and other retirees got together to protest the tax hike — and what they argued was too much spending on schools and not enough for senior services.

“It was a senior revolt. People were really pissed,” said Magnan, the 74-year-old co-founder of the Newtown League of Senior Voters. “Ten years ago, we had over 5,000 students. Now we have 4,000-something and the school budget has gone up by $10 million. When it comes to supporting seniors, we get nothing. Our senior center is a dump.”

This type of intergenerational political warfare could erupt more frequently in coming decades, as vast numbers of baby boomers grow old in their suburban homes, changing the demographics of their communities. Their decision to stay put may result in fewer suburban homes occupied by young families. That, in turn, could mean schools will be less full. And it could pit families with children against retired boomers in a fight for limited tax dollars.

“Their kids are graduated. Their interests are not taking care of the next generation of kids,” said John McIlwain, author of Housing in America and a former senior fellow at the Urban Land Institute, a research center that focuses on real estate and land use. “The people who show up at local government meetings are going to be the boomers. The pressure will come from the boomers and, as one mayor told me, they push for what they want.”

Between now and 2035, the U.S. Census Bureau projects the number of people 65 and over will explode from 48 million to 77 million, and the vast majority will be boomers, born between 1946 and 1964. More than half of boomers live in the suburbs. 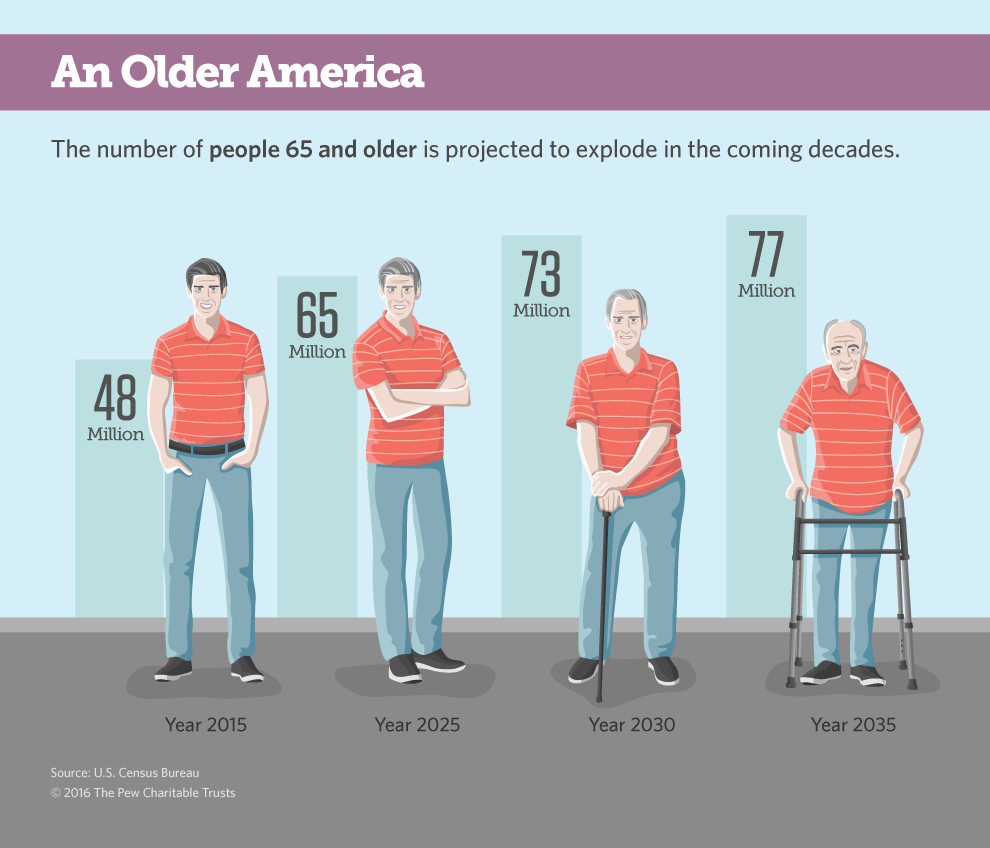 Boomers are expected to work longer than their parents did. They’ll pay taxes and spend money on goods and services. And they’ll donate to charities and do volunteer work.

But they will need a lot, too, because many of the features that made the suburbs desirable for young families — such as cul-de-sacs and multilevel houses — will be problematic for aging adults whose kids have grown up and moved away.

Boomers are likely to push many local governments to widen sidewalks and install benches, beef up public transit and help pay for home maintenance and repair, among many other things.

“The pressures on local government are going to be enormous,” said John Feather, a gerontologist and the CEO of Grantmakers in Aging, a national association of foundations for seniors. “We spent billions of dollars building cul-de-sac suburbs, which are the worst possible design for people who lose the ability to drive.”

Six years ago, a group of organizations including the International City/County Management Association (ICMA) asked more than 1,400 local governments how prepared they were to handle an aging population. The top three challenges cited were funding shortages, transportation and housing. The survey revealed only “limited progress” in preparing for the boomers compared to an earlier survey.

“It’s an issue every community is going to face,” said Abigail Rybnicek, deputy director of the ICMA’s Center for Sustainable Communities. “We’re trying to educate people on why this is important and why investment and planning now can have a big impact in the future.” 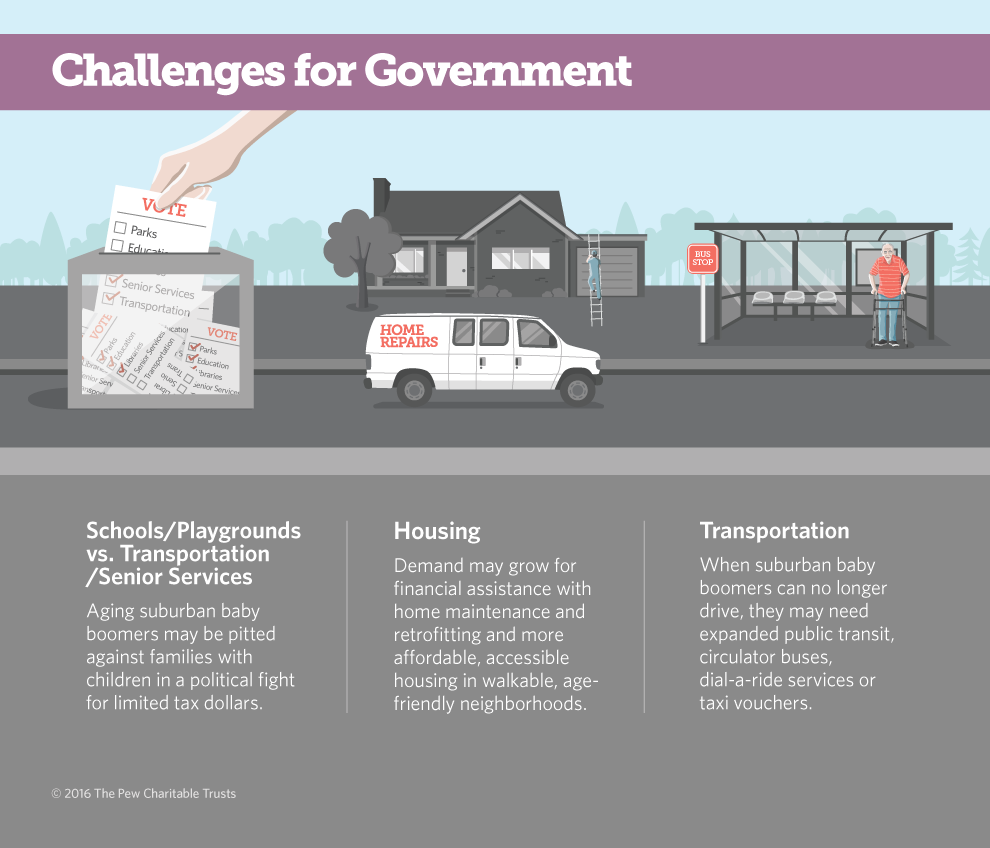 Suburban boomers who are well-off will be able to downsize to expensive condos, apartments or townhomes, if they choose. Those who grow old in their homes can pick up the tab for home modifications, personal care and private transportation or ride-hailing services such as Uber or Lyft.

But many working- and middle-class boomers with fewer resources won’t be as fortunate. Among Americans 50 to 65, more than four in 10 don’t have enough income to support them in retirement. Many have more debt than their parents did. They may end up needing everything from affordable housing to subsidized transportation to financial assistance with retrofitting their homes.

“The question is whether the government is going to respond to people without the means who are aging in the suburbs,” said Marjorie Ledell, a member of the Clark County Commission on Aging in Washington state. “It comes down to money.”

That’s a tough proposition for a lot of suburban communities.

In the far Chicago suburbs of McHenry County, Peter Austin, the county administrator, doesn’t think there is a local government solution.

“There can be some coordination. We can help put groups together, build some networks, have some safety-net discussions,” he said. “But I’m reluctant to say we’re going to grow government to meet those challenges. We are finding it increasingly difficult to meet needs we already have.”

In some communities, particularly in Sun Belt states, seniors have been flexing their political muscle over taxes and spending for many years. Often, the fight has been over schools.

Back in the early 1980s, most of Sun City West, an enormous age-restricted retirement community outside Phoenix, was separated from the surrounding school district after a lengthy fight about paying for schools.

In 2005, voters in Dade County, Georgia, approved a school tax exemption for seniors.

A 2012 study examined intergenerational conflict over decades in American suburban school districts. It found that the greater the number of seniors who lived in a suburban community, the less it spent on schools.

“That’s the consequences we’re going to be facing as boomers age,” said David Figlio, director of the Institute for Policy Research at Northwestern University, who co-authored the study.

The gap was particularly stark when the elderly residents were white and the schoolchildren were African-American or Hispanic, Figlio said.

Not all seniors are opposed to school funding. But they are more likely to support schools when their grandchildren attend them, Figlio said. However, that’s frequently not the case.

“We’re a very mobile society and you may live in Evanston, Illinois, and your grandkids live in Pasadena, California,” he said.

The graying of suburbia also could result in the deterioration of some neighborhoods. Experts say older adults who stay in their homes often do less maintenance as the years go by. Aging boomers on fixed incomes may be forced to choose between paying for prescriptions and groceries and keeping up their property.

That could lower property values in some suburban areas, said David Versel, an urban planner and senior vice president at Delta Associates, a real-estate consulting firm.

“Their homes are not going to be kept up. The roof might leak. The lawn might not look nice. It would devalue other properties around it,” Versel said. “I can see that happening on a large scale as boomers get older and don’t have the resources to maintain their house.”

Some planners and aging experts think that one way to help meet the needs of aging boomers is to change zoning and land use rules to expand housing options.

That could include allowing high density apartments in single-family neighborhoods or “accessory dwelling units,” so-called granny flats, an apartment in the basement or over a garage or a tiny house in the backyard that boomers or caregivers can live in.

But those concepts are highly controversial in suburbs designed for families and often don’t sit well with local residents, who argue that it would change the nature of the neighborhood and lower property values.

Boomers aging in the suburbs may use their considerable political muscle — buttressed by their numbers, relatively high education level and economic power — to transform the communities where they grew up.

Joseph Coughlin, director of the MIT AgeLab, predicts that boomers will demand everything from an Uber-like system for public transit to government subsidies for in-home technology to keep them healthy and safe.

“This generation has had everything else changed for them. We had to build new schools. We had to create new retail experiences,” Coughlin said. “Now that they’re getting older, they have new and different needs that will have to be met, not as a courtesy, but as a political demand, and government is going to have to step up.”

But local government officials contend they simply won’t have the resources to meet those demands. They say the private and nonprofit sectors also will have to step up, as will aging boomers themselves.

“I don’t think government can handle this all by itself. I’m not even sure government should,” said Amy St. Peter, assistant director of the Maricopa Association of Governments, the Phoenix area’s regional planning agency.

“People feel better when they can help themselves and help their neighbors. If people are seeing themselves as a client, it can be dehumanizing.”

St. Peter said her association is working with nine communities to improve services for the aging population. Several have focused on transportation and created volunteer driver programs.

“There’s going to be a slew of approaches and solutions to try and deal with this,” said Matt Thornhill, founder and president of the Boomer Project, a marketing research and consulting company. “The government’s not going to have the money to do it all. We have to find ways for everyone who has a vested interest in maintaining their community to be parties at the table, including local businesses, the health care industry, neighborhood associations and individuals.”