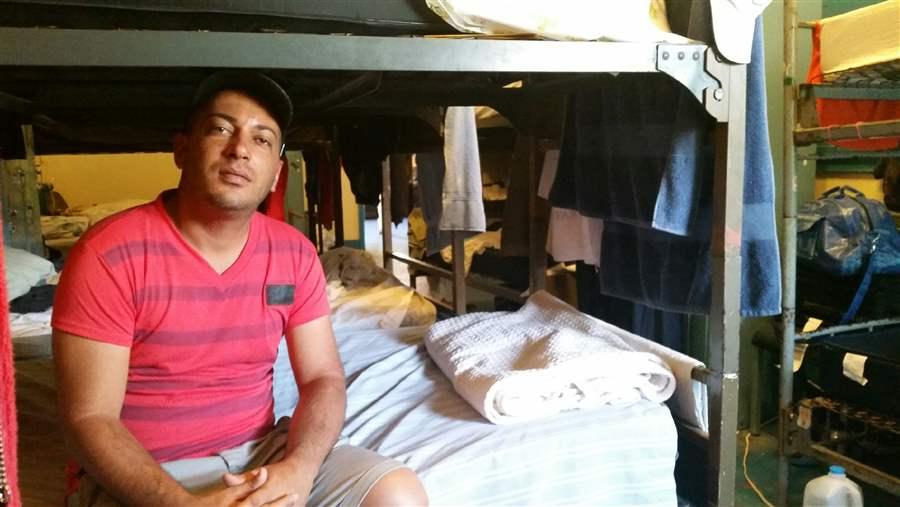 Héctor Martinez Rodríguez is one of dozens of Cubans who took refuge in El Paso, Texas. As more Cubans arrive, U.S. immigration policies that allow them to stay but turn others away are being questioned.

EL PASO, Texas — As the morning light seeps into the chapel of an immigrant shelter here just blocks north of the U.S.-Mexico border, a man sleeps undisturbed on a cot, wrapped in a comforter.

The chapel doesn’t normally serve as a bedroom, but for months the rest of the rooms at the Annunciation House shelter have been full. From February to May, about 4,000 Cubans crossed over the Rio Grande River into Texas’ westernmost city. After making their way to shelters and churches, many have been sleeping in crowded, makeshift quarters on bunk beds, cots, couches and pews.

The number of Cubans coming to the U.S. has increased dramatically in the last few years. And it continues to rise, with about 77,000 Cubans entering between October 2014 and April 2016. Many are forgoing the typical route across the Florida Straits by boat to Miami and are traveling by foot, bus, boat and plane through Central America and Mexico to the Southwest border.

As the Cubans have begun to put down roots across the U.S., a broader debate has emerged over whether they should still be allowed to simply walk into the country and automatically be able to gain legal residency after a year, when it can take years for people fleeing other countries to gain refugee status or citizenship.

Some members of Congress, including U.S. Sen. Marco Rubio, R-Fla., whose parents emigrated from Cuba, have introduced bills that would end part or all of Cubans’ special immigration status or benefits. But others, such as Ruben Garcia, director of the Annunciation House, say similar asylum privileges should be granted to people from other countries who are fleeing conditions that are worse than those Cubans face at home.

The debate is all the more acute in states like Texas, where Republican Gov. Greg Abbott has been less welcoming to other immigrants. Abbott has kept Texas National Guard troops on the border to be on the lookout for Central Americans seeking to cross illegally into the U.S. And like more than two dozen other governors, Abbott has said he won’t accept the resettlement of Syrian refugees in his state — a stance that federal courts have rejected.

Abbott’s office did not respond to requests for comment.

The difference between Cubans and Central Americans — who must prove they have been persecuted for their race, religion, nationality, social group or political opinion to be granted refugee status — is evident here at Annunciation House.

The Cubans soon will begin to receive welfare checks from the government. Meanwhile, Garcia said, the unauthorized Central American immigrants they are bunking with may soon be deported. “There is no asylum for them,” he said.

The exodus from Cuba began in earnest after December 2014, when U.S. President Barack Obama and Cuban President Raul Castro announced they would begin to normalize relations between the countries.

About 36,000 Cubans have come to the U.S. in the first six months of fiscal 2016, from October to April, nearly surpassing the total for the previous 12 months. 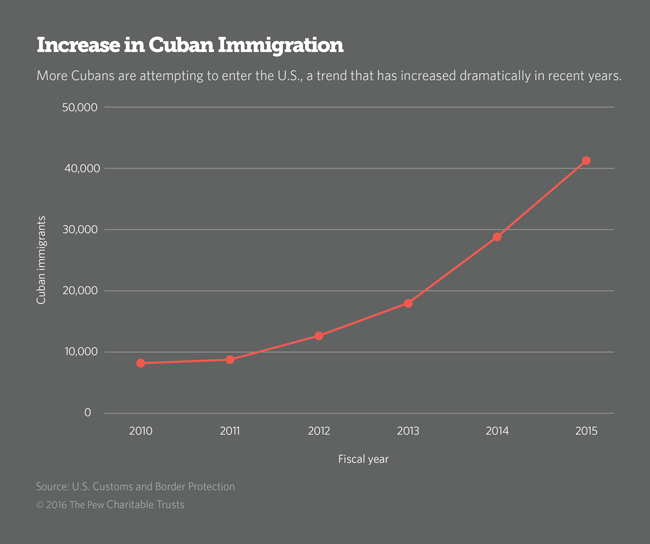 Cubans have had special immigration status since the Cuban Adjustment Act of 1966. But since 1995, Cubans caught in the water on their way to the U.S. must prove they are refugees, while those who reach U.S. soil can stay, regardless of circumstances, under a policy dubbed “wet foot, dry foot.”

Cubans who made it here to El Paso say they faced a perilous, monthslong journey through Central America — hiking through jungles, hiding from violent guerillas stalking their routes, and speeding in the dark on small boats. But, they say, it was worth it.

“It’s been my dream since I was born to be in a free country,” Alberto Arce Perez said. “It’s the dream of all Cubans.”

The freedom they seek is economic and political, Perez and other Cubans staying in El Paso shelters said. Cuba scores among the worst in the world for civil liberties and political rights, according to Freedom House.

In Cuba, the government controls everything, Perez said. The food is rationed and sometimes deliveries don’t come. Many people live in extreme poverty — the average salary was about $22 a month in 2014.

The absence of freedom of speech means that if you speak out, you’ll be persecuted, said Armando Genaro Vazquez, who was an electrical technician in Cuba, and Héctor Martinez Rodríguez, who was a chauffeur, both of whom were staying at Annunciation House.

The two left Cuba, they said, because the situation won’t improve unless the Castros are no longer in control.

But others have doubts about whether the Cubans arriving in the U.S. are fleeing the communist island because they are being persecuted or simply seeking a better life economically.

William LeoGrande, a government professor at American University who specializes in Latin American policy and politics, said it’s clear to him they are coming for economic reasons, not political ones.

That’s in contrast to tens of thousands of people from El Salvador, Guatemala, and Honduras, many of them unaccompanied children, who are threatened by gang violence in their countries. That they are turned away while Cubans are welcomed “doesn’t make sense,” LeoGrande said.

“It’s really difficult as an immigration advocate to see two people in somewhat similar circumstances, in terms of the danger and harm they are exposed to over the course of their lives, and for one group to have the easiest path to immigration status, and one the hardest,” Lopez said.

Central Americans often show up at the door of the Annunciation House starved, sick, and scared, Garcia said. The U.S. should recognize their plight, just as it recognizes the plight of Cubans, he said.

Where to Go Next?

The land path that Cubans are taking here was made possible by policy changes in Cuba and Central America. In 2008, Ecuador began allowing people from any nation, including Cuba, to travel into the country — a policy that the country revoked in December. In 2012, Cuba stopped requiring its citizens to ask the country permission to leave.

This winter, faced with growing numbers of immigrants passing through, Nicaragua and Costa Rica shut their borders, trapping thousands of Cubans in Costa Rica and Panama. Since then, the governments have loaded Cubans onto planes heading north, flying thousands to Mexican cities just south of El Paso and Houston, where they have then been bused to the border.

So far this year, the biggest group of Cubans, about 25,000, has come through Laredo, a southwest Texas city that many cross on their way to Houston. The flood of Cubans has strained resources there, said Jim Townsend, spokesman for Catholic Charities of the Archdiocese of Galveston-Houston. All the shelters are full.

In El Paso, meanwhile, only about 100 Cubans were left in temporary shelters as of last week. Of the 4,000 who entered the city since February, about 3,400 immediately caught a bus or plane, and 500 others have been helped to other cities, or found a place to stay in El Paso, said Juan Lopez, associate director of the U.S. Conference of Catholic Bishops’ Cuban and Haitian program.

Like many of the Cubans still here, Perez and his wife, who declined to give her name, don’t have money left from their journey or family in the U.S. who can help them.

Walking through the shelter where the couple is staying, Taylor Levy finds herself apologizing to the Cubans she sees. They’re waiting for a ticket out of town, anxious to start their new lives, and she is the one who will tell them when they can leave.

Levy, who works for Annunciation House, is coordinating their departures with the U.S. Conference of Catholic Bishops. The national organization provides immediate needs to Cubans and Haitians, such as shelter and food, through a government contract, Juan Lopez said.

Lopez finds local branches of Catholic Charities across the country with the capacity to help the Cubans, and sends them there, mainly to Albuquerque, New Mexico; Austin, Texas; Las Vegas; Louisville, Kentucky; Palm Beach, Florida; Phoenix; Rochester, New York and San Diego. His group has seen about 600 Cubans in El Paso so far, and about 100 have enrolled in its program, he said.

The Perezes are trying to scrape together money to buy a suitcase, although they don’t know yet where they’ll be headed. They said they don’t care, as long as it’s in the U.S.