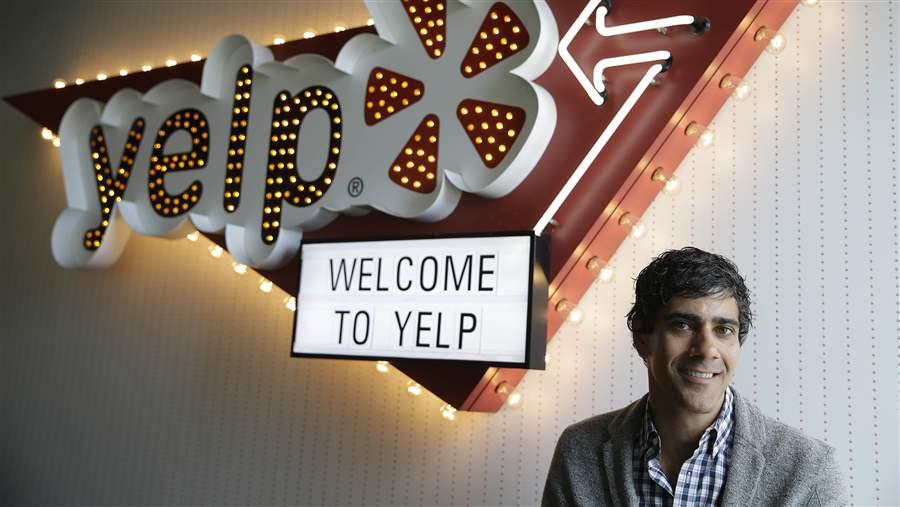 Yelp CEO Jeremy Stoppelman poses at his company’s headquarters in San Francisco. Yelp is one of a number of online companies that supports legislation to do away with consumer “gag clauses” that prevent customers from posting negative reviews.

Have you ever posted a negative review on a site like Yelp or TripAdvisor? It could be risky: Some businesses have inserted “gag clauses” in the fine print of service agreements barring you from doing just that. Some have even threatened legal action against complaining customers or slapped them with financial penalties.

That’s why legislatures in two states — California and Maryland — have enacted laws that prohibit such “non-disparagement” clauses in consumer contracts, and several others considered similar measures this year.

“To prevent someone from writing a negative review or sue them for doing that is plain wrong,” said Massachusetts Democratic state Rep. John Scibak, who sponsored a measure to prohibit the clauses. “People should be able to provide their feedback without repercussions.”

Scibak’s bill died in committee this year, but he plans to refile it in January. He hopes the Massachusetts legislature will soon follow the lead of California, the first state to pass gag clause legislation, known as the “Right to Yelp” law, in 2014.

The California law bars companies from using non-disparagement clauses unless consumers knowingly and voluntarily waive their right to complain. Violators face a civil penalty of $2,500 for the first violation, $5,000 for each subsequent one and an additional $10,000 for “willful, intentional, or reckless” violation of the law.

This year, Maryland became the second state to approve a ban on consumer non-disparagement clauses. The Maryland law, which Republican Gov. Larry Hogan signed in April, considers gag clauses an unfair and deceptive trade practice under the state’s consumer protection law, and merchants who violate it are subject to civil and criminal penalties. The law also prohibits consumers from publishing proprietary information or trade secrets.

Maryland Democratic state Del. Jeffrey Waldstreicher, who sponsored the bill, said he views it as a consumer rights issue. Discouraging consumers from providing truthful reviews that can be shared with others “starts to chip away at our whole system of e-commerce,” he said.

Waldstreicher said he was particularly outraged when he learned that a wedding venue had allegedly forced brides and grooms to sign a clause in their contracts saying they could be sued if they or any of their guests wrote negative reviews.

“It was so outlandish that not only the client could be sued, but they could be sued for what their guests said,” he said.

This year, at least three other states — New Jersey, Oklahoma and South Carolina —considered gag clause bills. None has passed.

It’s a new issue, said Pam Greenberg, a researcher at the National Conference of State Legislatures, and “legislators are hearing more and more from constituents about these problems.” More gag clause measures are likely to be introduced in state legislatures in the years to come, she said.

A federal measure that would ban consumer gag clauses also is moving through Congress. The U.S. Senate passed the Consumer Review Freedom Act by unanimous consent in December. Last week, a House Energy and Commerce subcommittee adopted a related bill and forwarded it to the full committee.

No one knows how many companies insert non-disparagement clauses into consumer contracts or how many customers have been affected by them, according to the Information Technology and Innovation Foundation, a nonprofit technology policy think tank. But the issue has arisen in a number of industries, from retail to hospitality.

Several cases involving gag clauses have drawn national attention in recent years. In one instance, an online novelty gift company allegedly demanded $3,500 from a Utah couple who posted a negative review about poor customer service on ripoffreport.com. The couple refused to pay and ran into trouble getting credit after the company reported the unpaid debt.

In another case, a Texas pet-sitting company that cared for a couple’s two dogs and a fish sued them for $6,766 after the woman wrote a lengthy, negative review on Yelp.

Paul Levy, an attorney for watchdog group Public Citizen, said large businesses such as banks and telephone companies generally don’t use consumer gag clauses, but small businesses sometimes do. He said his group and other consumer advocates think that’s a bad idea.

Right to Yelp laws are actually “pro-small business,” Levy said. “They protect the good businesses against unfair competition by those who want to suppress the truth about themselves.”

Levy said businesses have other ways to counter negative online postings. They can — and often do — respond online to dispute comments or apologize for poor service. And Levy noted that laws banning non-disparagement clauses don’t preclude businesses from suing customers for defamation if they believe the comments are false and are damaging their reputation.

“There are cases in which false statements can hurt people. Libel law is there to take care of them,” Levy said. “You don’t need a non-disparagement agreement.”

Many small businesses can’t afford to hire an attorney and bring a lawsuit against an ax-grinding customer who writes nasty reviews, Harned said. Online sites often allow reviewers to remain anonymous, she said, and a single consumer with a grudge can write numerous negative posts and harm a business’ reputation.

But Harned said the NFIB hasn’t taken a formal position on Right to Yelp laws because it also has concerns about freedom of speech.

“Small-business owners are very pro-First Amendment,” she said. “We’re not sure gag clauses are the right solution.”

Online review companies have supported legislative efforts to pass Right to Yelp laws. So have groups such as the California Retailers Association and the National Retail Federation, as well as the Internet Association, a trade association that includes Amazon and eBay.

Laurent Crenshaw, director of public policy at Yelp, said the whole point of websites such as his is to give consumers the ability to read other customers’ reviews and take them into consideration before making a purchase or using a service.

“We are opposed to gag clauses that attempt to silence individuals and prevent them from sharing their honest experience online,” Crenshaw said. “When a business owner inserts a clause into a contract, at the end of the day they’re trying to silence the person.”

Crenshaw said he isn’t aware of any organized opposition to legislation that would do away with gag clauses. In the California and Maryland legislative hearings, for example, no one testified against Right to Yelp bills.

And support for these types of measures thus far has been bipartisan, both in states that passed them and in Congress.

That’s why Maryland’s Waldstreicher said he thinks other state legislatures will follow the lead of his state and California.

“This is a law that makes a meaningful difference and is also politically popular. Even states that have divided government may pass it,” he said. In Maryland, which has a majority Democratic legislature, “We did it with the signature of a Republican governor who is considered very pro-business.”