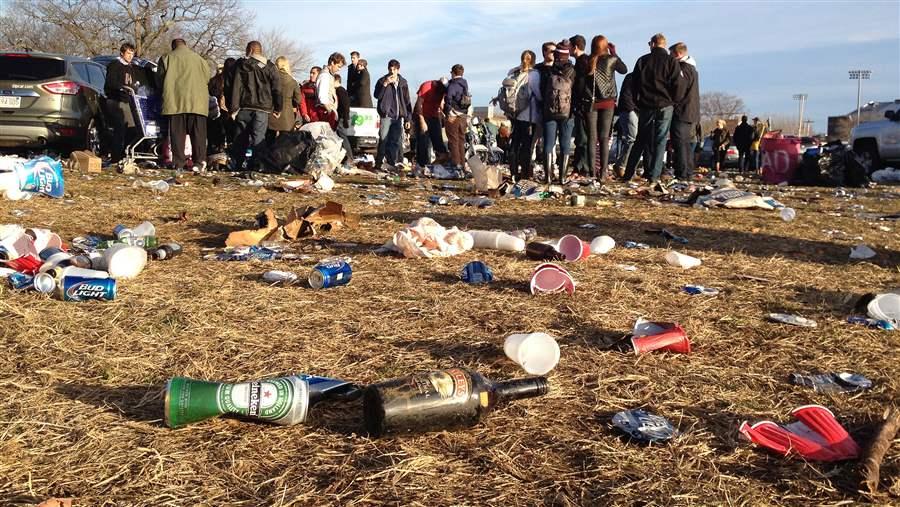 Bottles of alcohol litter a parking lot outside the Yale Bowl after a football game between Yale and Harvard. Some schools are opening “sober dorms” for students with addictions to alcohol or drugs.

Story has been updated to correct the spelling of Amy Boyd Austin's name.

Ryan had a pattern: He’d enroll in college with the best of intentions, start drinking and drugging, then drop out. Three years ago, as he prepared to enroll at the University of Miami, his fifth school, he had what he called a “white light moment.”

“I realized there was absolutely no way I’m going to stay sober,” he recalled.

So Ryan decided to try something different. He enrolled at Rutgers University, the state university of New Jersey, and moved into the Recovery House, a special dorm that offers “substance-free” housing and activities for students in recovery from alcohol and drug addiction.

“It was a safe space with people who were trying to do what I was trying to do,” said Ryan, now 25, who asked to be identified only by his first name to protect his privacy. “No one was talking about going out and getting drunk. It was the antithesis of my previous dorm experiences, where the shackles are off and people go crazy.”

The nation’s opioid epidemic is focusing new attention on a strategy Rutgers pioneered back in 1988. Oregon State University will offer substance-free housing to students this coming school year. Last year, Republican Gov. Chris Christie signed a law that requires all state colleges and universities in New Jersey to offer sober housing if at least a quarter of the students live on campus. The law gives schools four years to comply, but the College of New Jersey was already preparing to open a sober dorm, which it did last fall. Texas Tech opened its substance-free housing in 2011.

Sober dorms are a “major new development in the recovery movement. They’re unique because they get to the heart of the beast,” said Dr. Robert DuPont, a psychiatrist who specializes in drug abuse. DuPont heads the Institute for Behavior and Health, a drug policy think tank based in Rockville, Maryland, and served as the second White House Drug Czar from 1973 to 1977.

In college, DuPont said, “You’re surrounded by people who are using alcohol and drugs in addictive ways. Someone else is paying the bills and there’s no supervision.”

Students who abuse alcohol or drugs have higher dropout rates and lower grades, DuPont said. But once students get into recovery, he said, “It’s stunning how many were failing before and are now getting As.”

A decade ago, most college students with substance abuse problems had little help besides student health services and local Alcoholics Anonymous chapters. That’s changing. Today, roughly 150 colleges and universities in 49 states offer recovery programs, providing students with counseling, community and activities on campus. As recently as 2012, there were only 35 such programs. Many of the newer programs got their start with the help of $10,000 seed grants from the Stacie Mathewson Foundation, a Reno, Nevada-based nonprofit that tries to raise addiction awareness.

In the late 1970s, a Rutgers student who’d been drinking fell out of the bleachers at a football game and was paralyzed. The tragedy prompted the school to conduct a campuswide survey of student drinking. School officials found that the problem was much more pervasive than they’d thought, said Lisa Laitman, the director of the university’s Alcohol and Other Drug Assistance Program.

In 1983, the university hired Laitman to create a recovery program. She was the lone alcohol counselor for 50,000 students spread across the school’s three campuses. Gradually, more staff was hired. Within a few years, at Laitman’s urging, the school opened its first Recovery House on the New Brunswick campus.

“My students in recovery were living in regular dorms and they didn’t have any support. They felt really isolated and alone,” Laitman said.

Today, both the New Brunswick and the Newark campuses offer sober housing. About 30 students live in the New Brunswick dorm, while four currently live in the Newark dorm. The program receives about $240,000 in state grants each year, a portion of which goes to campuswide campaigns to prevent substance abuse. To live in the dorms, students must have been sober for at least 90 days. Many more have been abstinent for longer, because newly sober students are frequently too fragile to take on the “huge undertaking of going to college full time,” Laitman said.

Many students transfer to Rutgers with the express purpose of joining the school’s recovery program and living in a sober dorm, Laitman said. Prospective students must interview with recovery center counselors and current residents, to ensure they will be a good fit. Once accepted into the program, students are required to attend at least two 12-step meetings a week. Students are also encouraged to participate in the center’s extracurricular activities.

Students may live in the dorm year-round, which gives them extra support and allows them to catch up on coursework missed when they were using, Laitman said. Living in the dorm costs about the same as other on-campus housing. (Students who choose to stay on through the summer pay a little extra.)

Francis, a 20-year-old rising senior, got sober as a freshman at Rutgers. His turning point: After an episode of binge drinking, he blacked out and came to in a ditch. Within 48 hours, he said, he found himself “in the same ditch by the same side of the road.”

Because his father is a recovering alcoholic, Francis said, it was easy for him to see where he was headed if he didn’t get help. Once he entered the school’s recovery program that year, he heard about the Recovery House. His dad thought it was a great idea, but his mother hesitated.

“Because my drinking had been so short-lived, she wanted to make sure I wasn’t overreacting,” said Francis, who didn’t want his last name used to protect his privacy.

He moved in sophomore year and has been living there ever since.

“I was very, very nervous at first,” he said. “But it was a fantastic environment for me. I learned how to be a student in a way that I didn’t have to in the time that I was drinking.”

“Our students really flourish in this environment,” Laitman said. “It really is a social experiment where you can put people who are in recovery on a college campus. As long as you can provide them with friends and a place that’s safe and a certain amount of activity, they do really well.”

In 2010, the University of Vermont launched its Catamount Recovery Program for students recovering from alcohol and drug addiction. Because all first- and second-year students are required to live on campus, the school decided to offer sober housing right away, said Amy Boyd Austin, the program’s director. Currently, eight students live in one of the college’s substance-free cottages.

Students living in the cottages must have been sober for at least six months, and they must sign a contract. If they use drugs or alcohol again, or enable someone else to use, or break another student’s confidentiality, they’re kicked out of the house, Boyd Austin said.

Last fall, the school also opened a “Wellness Environment” (WE) residence hall for incoming freshmen. Like students in the Catamount program, the WE students must commit to substance-free living, but the program isn’t tailored to students in recovery. The dorm offers tai-chi and yoga classes, meditation and a mandatory course in neuroscience.

Most schools do not offer sober housing, but have some sort of support in place for students, according to Boyd Austin, who also serves as president of ARHE.

Last year, for example, regents at the University of Texas, which does not offer sober housing, allocated $2.4 million to continue funding recovery programs at the school’s academic campuses. Texas Tech, a state school that is not part of the UT system, does offer sober housing.

Other schools play matchmaker, helping pair students in recovery with like-minded roommates. Some offer sober suites in the midst of regular dorms, which can be challenging for students struggling to stay sober, Boyd Austin said.

“If you’re just in a wing that’s substance-free and all that’s separating you is a bathroom, you can still smell weed or hear beer pong going on,” she said.

But collegiate recovery programs are not treatment, addiction experts say. Instead, they are designed to support students who have already been through treatment and are looking to live and study with like-minded students.

Successful recovery programs have a space that students can call their own with a dedicated counselor who can work closely with the college to coordinate activities. Collegiate recovery programs also offer retreats, academic courses in recovery, leadership workshops, health and wellness activities, movie nights, sober tailgating and recovery conferences.

The idea is to create a culture and a community for students who are already committed to staying sober.

“Nothing is a truly safe space,” Boyd Austin said. “Having housing is not a guarantee that relapses can’t happen.”