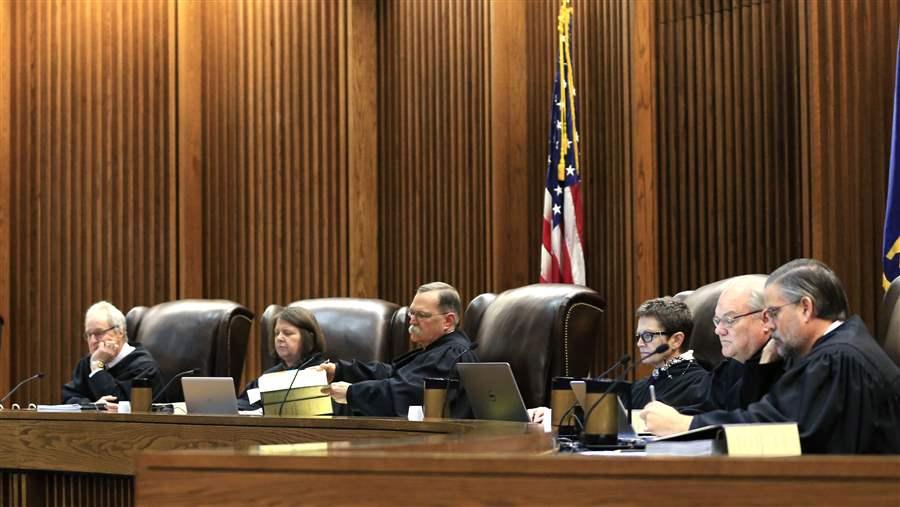 A campaign is underway to oust four of the seven members of the Kansas Supreme Court this fall, which could make it among the most expensive judicial races in the country.

Outside interest groups are pumping millions of dollars into state judicial races and already have influenced the outcome in Arkansas, West Virginia and Wisconsin, where voters elected supreme or lower-level appellate court justices this year.

The spending likely will continue at a breakneck pace in a handful of very competitive races that remain — especially in Kansas where years of conflict between the state Supreme Court and the executive and legislative branches is culminating in heated retention elections for four of the seven sitting justices.

And that raises questions about whether justice is being tainted and trust in the courts is being eroded by all the money. Many justice groups fear it is.

"One of the harmful impacts of all this money is that it creates a whole series of conflicts of interest or appearance of conflict that undermine confidence in our court system," said Alicia Bannon of the Brennan Center for Justice at New York University School of Law, a nonpartisan law and policy institute that seeks to improve the justice system.

State judicial races, even for a seat on the highest court, used to be so staid that many voters didn’t know they were being asked to vote on judges until they got their ballots.

But that’s changed: The floodgates for unlimited spending on campaigns are now open because of recent U.S. Supreme Court decisions. And business, labor and social issues interest groups have realized that the expansion of their influence from Washington to state legislatures can be derailed by the courts if they don’t have sympathetic judges on the bench.

“Advancing a national agenda at the state level through a central organization that can spend money where it wants without donors being identified can be a powerful thing,” said Emily Shaw of the Sunlight Foundation, a nonprofit group that advocates reforming how campaigns are financed.

What’s already been spent this year illustrates how money and outside groups can influence the outcome of a race.

In Arkansas, incumbent Justice Courtney Goodson was defeated by Circuit Court Judge Dan Kemp in March in the race for chief justice of the Supreme Court, although she outspent Kemp on television ads $378,650 to $110,710.

But Goodson was the target of more than $500,000 worth of TV ads from the Judicial Crisis Network, a “dark money” group not required to disclose contributors.

“One reason [Goodson] was targeted was her role in a decision that overturned a tort reform law in Arkansas,” Bannon of the Brennan Center said.

So-called tort reform laws often limit the liability and monetary damages that are awarded when products or services are deemed at fault in injury, death or financial loss and are nearly always a flashpoint between industry and trial lawyers.

In West Virginia, five candidates for one Supreme Court seat reported spending $1.6 million for the May election. But the Brennan Center calculated spending will exceed $2.9 million once all the money spent by outside groups is accounted for.

“JFI was created to push back on liberal attempts to circumvent the state legislatures where they’ve been voted out of office and instead push policy from the bench,” he said.

In Wisconsin, the April race for a Supreme Court seat between interim appointee Rebecca Bradley, who was named last year by Republican Gov. Scott Walker, and Appellate Court Judge JoAnne Kloppenburg became a partisan slugfest in a nominally nonpartisan race.

So much money in races to elect judges who are supposed to be impartial raises questions. Are their backers buying judges with certain temperaments or prejudices, or even making them feel beholden in some way? And does the money, especially from interest groups, erode the public’s confidence in the courts?

A poll by the Brennan Center and the nonpartisan group Justice at Stake, which campaigns for impartial courts, indicates there’s a corrosive effect. Eighty-seven percent of the public in the 2013 poll said they thought spending by outside interest groups would influence a judge’s subsequent decisions. Only 10 percent said it would have little or no influence.

Arkansans were so appalled by the money that flowed into the election of their chief justice and another race for an associate justice’s seat this spring that Republican Gov. Asa Hutchinson and key lawmakers are pushing to replace elections with an appointment system.

Judges have complained about the role of money in their election to the bench. A survey of more than 2,000 judges at all levels more than a decade ago indicated that more than a third thought campaign contributions had some impact on how judges do their jobs.

Like ads in regular campaigns, commercials by independent groups are overwhelmingly negative and often distort the truth. They also allow candidates to put distance between themselves and distasteful ads. “The candidate doesn’t want to be associated with mudslinging,” Sunlight’s Shaw observed.

But particularly vexing to groups like the Brennan Center and Sunlight Foundation is the influence of money that can’t be easily traced to donors. Dark money groups operate under a category of nonprofit organization that allows them to keep their donors names a secret while groups such as the RSLC, called a 527 for that section of the tax code, have to file names of donors through the IRS.

But Bannon and Shaw say that 527s don’t have to file disclosure forms in the final months of a campaign, meaning donors aren’t known until after an election has run its course. “It’s available after it’s no longer needed,” Shaw said.

Additionally, national groups such as the Republican State Leadership Committee’s JFI devote money to so many races around the country that it can be impossible to tell if particular donors channel money to particular races.

Critics of undisclosed money say that it makes it impossible to know if judges should recuse themselves because of potential conflicts of interest.

"It’s not really the public’s right to know so much as it is the litigants’ right to know when they appear before the court. … [They] wouldn’t even know to ask for a recusal if there is no transparency," Arkansas Supreme Court Justice Karen Baker told a state Senate committee exploring various ways to reform the judicial campaign system.

But representatives of groups that don’t disclose their donors say they are protecting the rights and even safety of their donors.

David Ray from Americans for Prosperity, another dark money group, told Arkansas senators that disclosure has a "chilling effect of deterring individuals from contributing to causes that they support. ... Transparency is for government. Privacy is for citizens."

A big push this fall by business and socially conservative groups inside and outside of Kansas to fire four justices — and a national response by unions and liberal social groups — could easily be among the most expensive of judicial campaigns.

The fight stems from a long-standing feud between the high court and Republican Gov. Sam Brownback and legislators over whether the Legislature is equitably and sufficiently funding the public schools and over the court overturning the death sentence in a high-profile murder case.

The feud got so bad the last two years that the Legislature at one point voted to cut off funding for the court system before backing off.

The threats haven’t ended there. Brownback has had to call the Legislature back into session this month to try to devise a new system for financing public schools that the court says meets the state’s constitutional equal funding requirement. If lawmakers fail to do so by the end of the month, the court said it will order school doors to remain closed in the fall.