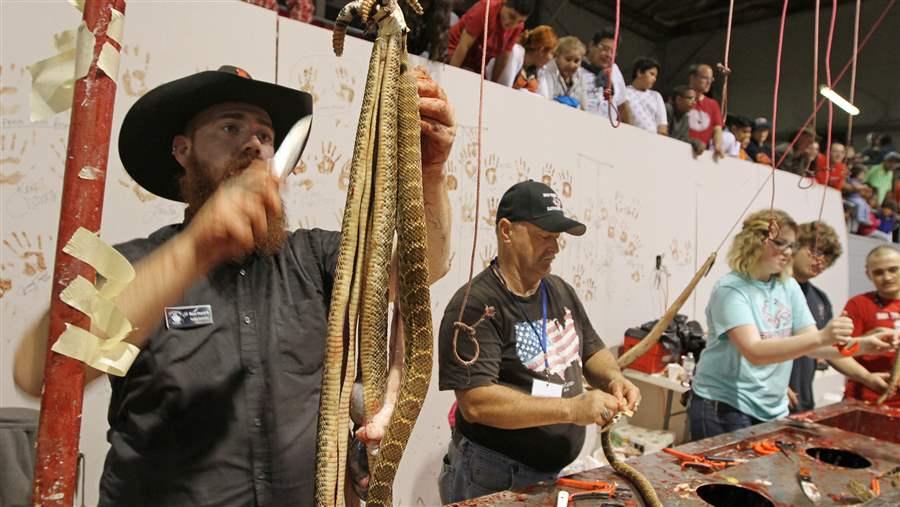 The skinning station at the Rattlesnake Roundup in Sweetwater, Texas. Faced with a sharp decline in some rattlesnake populations, some states are trying to give the venomous pit vipers better odds of survival.

This story was updated to clarify that snakes that can harm or kill with venom are "venomous," not "poisonous." Venom is injected, while poison must be consumed or touched to cause harm.

In the ceaseless war of man versus rattlesnake, the rattlesnake has long been the loser. Now, some states are trying to give the sometimes deadly pit viper better odds of survival.

The shift follows a dramatic decline in some U.S. rattlesnake populations, as habitats have been lost to development and the reptiles have been killed, accidentally and intentionally. And it is threatening old traditions and forcing people to come to grips with animals many would rather avoid.

The Massachusetts Division of Fisheries and Wildlife plans to establish a colony of timber rattlesnakes on an uninhabited island in hopes of saving the dwindling native species. Texas wildlife officials are writing a rule that could prohibit the use of gasoline to harvest Western diamondback rattlesnakes, a practice that is already banned in 29 states.

The rattlesnake roundups that were once common across the South and Midwest — in which the snakes are bought by the pound, displayed, decapitated, skinned, fried and eaten, or carted away to be turned into wallets and belts — have largely fallen out of favor. Today, rattlesnake events occur in only six states — Alabama, Florida, Georgia, Oklahoma, Pennsylvania and Texas — and some leave the snakes unharmed.

“In the past, the snakes were hated and exterminated,” said Collette Adkins, senior attorney with the Center for Biological Diversity, which advocates bans on gassing and rattlesnake roundups. “Ecological values change. Cultural values change.”

With greater recognition of the value of all species to the ecosystem, preservation has become a priority in wildlife management. Rattlesnakes play a role as a predator of rodents and food for top carnivores like hawks and eagles.

Minnesota, for example, paid a bounty for timber rattlesnakes until 1989. The state put the snake on its threatened species list in 1996 and in 2009 adopted a Timber Rattlesnake Recovery Plan, which involves habitat restoration and public outreach and education. Landowners who find a rattlesnake on their property can call a Rattlesnake Responder to have it relocated rather than killed.

Convincing people of the need for a hated species, though, is still a tough sell, wildlife experts agree.

“Very, very young toddlers are imprinted early on with phobias about snakes,” said biologist D. Bruce Means, executive director of the nonprofit Coastal Plains Institute and Land Conservancy and an authority on the Eastern diamondback rattlesnake.

“State legislatures are faced with constituents who would be aghast at the idea of saving or protecting these creatures,” said Means, an adjunct professor at Florida State University. “If it was butterflies we were talking about, or birds, something cute and cuddly, it would be different.”

While the Western diamondback rattlesnake is plentiful, the Eastern diamondback and timber rattlesnakes need government help to avoid extinction in some parts of the country, advocates say. Washington state is among those attaching radio monitors to rattlesnakes to study their habits and habitat and plan for their management.

But listing a species as federally endangered takes years, and landowners often want to avoid that designation because it limits land use. Last September, the U.S. Fish and Wildlife Service took a more modest step, proposing its first listing of a rattlesnake as threatened — the Eastern massasauga, sistrurus catenatus, in the upper Midwest. And many states have listed species of rattlers as threatened, endangered or species of concern, which typically makes killing them illegal except when someone’s life is in danger.

Despite its fearsome appearance and reputation, rattlesnakes tend to be shy, docile creatures that stay away from humans and strike only when they feel threatened, herpetologists say. About 60 percent of bites occur on the hands and forearms, a sign that the person was reaching toward the snake.

An estimated 7,000 to 8,000 people are bitten by venomous snakes in the U.S. every year, but because of prompt medical care, an average of only five people die of venomous snake bites each year.

“People want the outdoors to be as safe as their child-proof living rooms,” said John Davis, wildlife diversity program director of the Texas Parks and Wildlife Department. “Outside is not as safe. As people urbanize they lose sight of that. It’s a cultural issue.”

The timber rattlesnake, whose scientific name crotalus horridus comes from the Latin words for rattle and dreadful, once was found in 31 states. But its numbers have declined precipitously in the East, as construction has destroyed its habitat and people have killed it, sometimes inadvertently by running over the snake on the road. Today, the timber rattler is no longer found in Maine and Rhode Island. And Connecticut, Indiana, Ohio, Massachusetts, Minnesota, New Hampshire, New Jersey, Vermont and Virginia list it as threatened or endangered.

In Massachusetts, the timber rattlesnake has been a symbol of strength since colonial times. There's a coiled timber rattler on the yellow Gadsden "Don't Tread on Me" flag first used in the American Revolution.

Today, only about 200 timber rattlesnakes survive in five scattered sites across the state. Besides human predators, the timber rattler faces another threat: fungal infection. With the help of a $500,000 federal grant in 2013, the state is working to boost the number of timber rattlers in the wild while trying to fight the disease.

MassWildlife chose Mount Zion, a 3 1/2-mile-long, forested island that’s supposed to be off limits to people in the Quabbin Reservoir in the central part of the state for the effort. The state proposed moving up to 10 rattlesnakes to the island each year starting in 2017.

“It’s important that we stand up for endangered species,” Republican Gov. Charlie Baker told reporters in May.

But public hearings on what became known as the Snake Island plan drew angry, emotional crowds who worried that the snakes could easily leave the island — they’re good swimmers — and attack nearby residents, pets and tourists. Wildlife officials said the snakes would have what they need on the island and were unlikely to leave. Besides, biologists plan to attach radio transmitters to the snakes and could track any that got away.

State officials apologized for poor communication and pledged to restart the planning process.

State Sen. Eric Lesser, a Democrat who represents Belchertown, a main visitor access point to the reservoir, introduced an amendment to the state budget that would impose a one-year moratorium on the plan. It has been approved by the Senate and goes to a conference committee with the House this summer.

Despite claims that the island is remote, Lesser pointed out that it’s connected to the mainland by a short, narrow causeway, and an outhouse on the island is used by boaters and fishermen. Plus, he and his constituents worry that the presence of snakes will hurt tourism in the area.

There’s also lingering animosity toward the state about the creation of the Quabbin Reservoir, which provides drinking water for the city of Boston, Lesser said. Residents of four communities were relocated and their towns flooded when it was built.

“We were merrily going on with the science, and we neglected the social,” said Jack Buckley, head of the Massachusetts Division of Fisheries and Wildlife. “We have to work to get this right.”

In Texas, the Parks and Wildlife Commission last month directed the wildlife department to draw up a rule by November to ban the “gassing” of rattlesnakes, which could mean the end of a major way rattlesnakes are hunted in the state.

Hunters typically use a common garden sprayer containing a few ounces of gasoline to spray gas or fumes into a den, wait half an hour and collect the rattlesnakes that emerge. Wildlife officials say the practice harms 130 species of rare invertebrates that exist only in Texas and 26 federally listed invertebrates that coexist with the rattlers in crevices and caves.

But people in Sweetwater, Texas, who bill their Rattlesnake Roundup as the world’s largest, say that without gassing, the number of rattlesnakes collected would be drastically reduced.

At the most recent roundup in March, organizers bought a record 24,262 pounds of Western diamondback rattlesnakes at $10 a pound. About 25,000 people attend the roundup last year, more than doubling Sweetwater’s population and providing $8.4 million in economic impact.

“It’s easy to sit in Austin and throw out rules,” said Leah Andrews, executive vice president of the Sweetwater Chamber of Commerce and a member of the wildlife department’s Snake Harvest Working Group. “We’re the ones who’ll pay the price.”

Dennis Cumbie, who has run the venom milking pit at the roundup for years, says the fact that hunters continue to harvest so many pounds of snakes from the same dens year after year proves that gassing doesn’t harm them. He disputes studies that show the invertebrates are harmed, saying they were conducted in the wild elsewhere around the country, not in arid Texas, and in labs.

One alternative to gassing is trapping. But hunters in Sweetwater don’t want to change their methods because gassing is cheaper and easier, Andrews and Cumbie said.

In 2012, the Evans County Wildlife Club in Claxton, Georgia, stopped buying and selling Eastern diamondback rattlesnakes. The state agreed to provide at least 40 live rattlesnakes, work with Georgia Southern University to bring in a birds of prey show, present environmental education programs in local schools and promote the new wildlife festival through the state tourism office.

The change made ecological and practical sense. The roundup was struggling to find rattlesnakes anyway, and the state was about to ban gassing rattlesnakes because they live in gopher tortoise burrows. The gopher tortoise is the official state reptile of Georgia and the U.S. Fish and Wildlife Service has proposed listing it as threatened in the state.

“I got a lot of hate mail,” said Bruce Purcell, who was president of the club at the time of the switch. “People thought I was buckling under pressure from environmental groups — and we were under pressure. But we could have gone on like we were.”

After the roundup converted, though, Purcell got mail from around the world applauding the change.