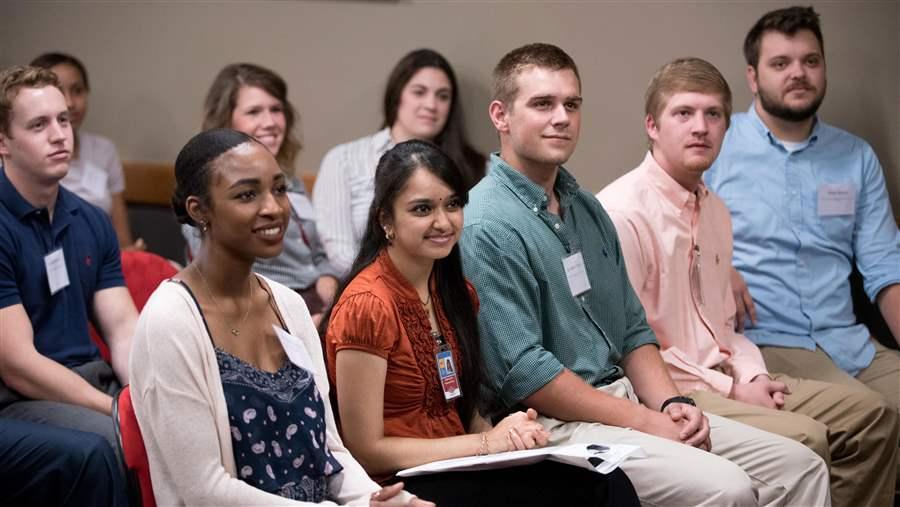 The first class of medical students gathered last week to mark the opening of a branch of the New York Institute of Technology College of Osteopathic Medicine on the campus of Arkansas State University in Jonesboro. Starting new branches of medical schools in medically underserved areas is one way of addressing doctor shortages.

This story was updated to correct the name of the American Association of Colleges of Osteopathic Medicine.

Earlier this month, dignitaries gathered at Arkansas State University in Jonesboro to cut the ribbon on a new medical school, only the second in a state with a dire shortage of doctors.

The school will greet an incoming class of 115 students in August, but it will not belong to the state university. The university will work with the private New York Institute of Technology College of Osteopathic Medicine, which will train future doctors in a leased building on campus.

The arrangement is built on the premise that the best way Arkansas can attract and retain doctors in a state that has among the fewest physicians per capita and among the unhealthiest residents is to educate and train them in-state.

The Arkansas initiative is one of several that states are undertaking to address a doctor shortage that is going to get worse in much of the nation, especially in states with large rural areas or high concentrations of minorities.

States such as Georgia and Texas are increasing their number of medical residencies under the same premise as Arkansas: the idea that doctors are more likely to remain in the states where they train.

Many states offer grants and stipends to medical students and residents willing to do clinical rotations in parts of their states where doctors are needed most.

Some states have created branches of their medical schools in underserved areas to attract doctors and residents to the regions. The University of Kentucky College of Medicine, for instance, is creating satellite campuses in the southern and eastern part of the state.

Arkansas, Kansas and Missouri passed measures in the last two years that enable medical school graduates to treat patients before completing their residencies.

Almost all states have embraced telemedicine, in which doctors use audiovisual technology to treat patients in remote locations, notably rural areas, from afar. And several states, such as Arizona, Maine, Maryland, Nevada, Vermont and Washington, have liberalized laws to enable nurse practitioners and physician assistants to perform some treatment normally done by doctors.

The nation is projected to face a shortage of as many as 94,700 physicians by the year 2025, according to the most recent analysis by the Association of American Medical Colleges (AAMC), which represents 145 American medical schools and 400 teaching hospitals and health systems.

And in 2014, providing the same amount of medical care to underserved areas would have required as many as 96,200 more physicians, according to the AAMC.

The shortage is especially dire in parts of the South, with its many rural areas and minority communities. And in some states, tight budgets and projected deficits have exacerbated the problem.

In Louisiana, for example, the state’s ongoing budget troubles are endangering the future of medical training programs, lawmakers were told earlier this year. Proposed cuts to hospitals could stem the stream of residents for a generation, in a state that has a shortage of health care workers and the unhealthiest population in the nation.

“The dean of the School of Medicine tells me almost daily he's getting calls from students saying, 'Is this really where I need to train? Should I stay here or should I go someplace else?' " Larry Hollier, chancellor of the Louisiana State University Health Sciences Center in New Orleans, told state senators.

Residencies often are the bottleneck in the physician supply chain.

The AAMC says that the U.S. has a shortage of several hundred residency slots as a result of a cap on Medicare spending on graduate-level medical education.

That’s why at least 27 states, including Kansas, Missouri, South Carolina and Texas, offer grants and stipends to medical students and residents willing to do clinical rotations in parts of their states where doctors are needed most.

Texas offers a $500 housing and transportation allowance for those training in underserved areas, for instance. Florida pays medical and nursing students up to $3,000 for doing clinical rotations in community health centers.

But other state efforts to provide medical care in underserved areas have been met with opposition.

The AAMC, the American Medical Association and the American Association of Colleges of Osteopathic Medicine opposed the new laws allowing medical school graduates in Arkansas, Kansas and Missouri to treat patients before finishing their residencies.

They argued that medical school alone doesn’t prepare a physician to begin practicing. For that, they said, graduates still need clinical residency training.

The solution to the shortage is producing more doctors, and the nation doing so gradually.

The increase is even more pronounced when it comes to doctors practicing osteopathic medicine, who are trained in separate medical schools and treat patients more through touch and physical manipulation.

Since 2002, the number of students enrolled in osteopathic medical school has more than doubled, to nearly 26,000, according to the American Association of Colleges of Osteopathic Medicine.

Osteopathic medical schools also have a tradition of locating in underserved areas. And as the new partnership in Arkansas shows, they will branch out into other states, often in association with existing universities.

The Edward Via College of Osteopathic Medicine (VCOM), a nonprofit, opened its first campus in 2002 on the campus of Virginia Tech University, in southwestern Virginia. At the time, all three of the state’s medical schools were in the eastern part of the state.

State officials and those at Virginia Tech concluded that the VCOM campus would be the best way to address the severe doctor shortage in that part of the state.

In recent years, VCOM opened new branches in South Carolina, in partnership with Wofford College, and in Alabama, with Auburn University as its partner.

This fall, the nonprofit Burrell College of Osteopathic Medicine will welcome its first class on the campus of New Mexico State University. The hope is that the school will bring doctors to underserved southern New Mexico.

The new partnership in Arkansas, between the public university and the private medical school, grew out of talks on how to bring more primary care doctors to the rural and poor Delta region of the state.

Rather than start its own costly medical school, Arkansas State University concluded in 2013 that attracting a branch of an osteopathic school would be best because of osteopathic medicine’s emphasis on primary care and because its schools do not require large research facilities that are expensive to maintain.

The medical school will lease the historic, centrally located Wilson Hall on the university’s campus for about $300,000 a year. Renovations cost $12.6 million, with each school contributing $2.3 million up front. Arkansas State University borrowed to cover the rest of the costs, which is expected to be paid back from rent paid by the medical school.

Jason Penry, the university vice chancellor, said the new school will recruit students heavily from Arkansas to increase the chances that graduates will remain to practice in the state.

Medical school students will have the same access to the university’s libraries, gyms and other facilities as other students. And the medical school will be equipped with technology so that students on the Long Island and Jonesboro campuses can attend lectures at the other.

“In a resource-short environment this was a way of bringing decades of experience in medical education to the state and region in need,” Penry said.