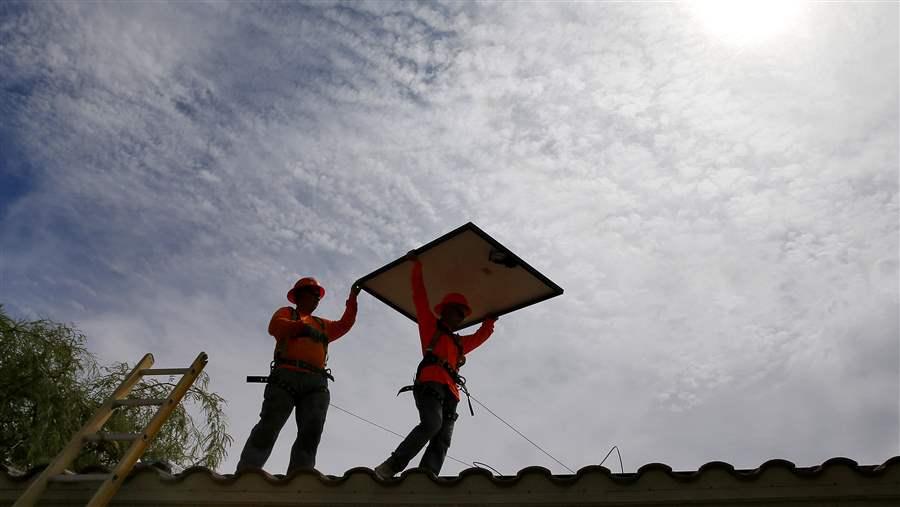 Electricians install solar panels on the roof of an Arizona home. States are re-examining whether utilities should pay retail prices for the energy that solar customers generate.

The practice of requiring utilities to pay solar energy customers retail prices for electricity that they produce but can’t use is under attack in multiple states.

Net metering — paying solar customers for transferring their excess energy back on to the electric grid, usually at retail rates — might be a victim of its own success.

It has helped to propel the surge in solar power. But for utilities, what was once a minor expense has grown into a huge one. State policymakers in booming solar markets and elsewhere are looking to see if net metering places a disproportionate burden on utilities and their non-solar customers.

Regulators and legislatures in 28 states, from Hawaii to Maine, are either scrapping net metering or considering doing so. The measures’ potential impact on utilities, the solar industry and its customers vary.

But net metering has long been a target of utilities and critics, so why does there seem to be such a rush to reconsider the policy now? At the end of last year, the U.S. Congress extended a 30 percent tax credit for installing solar panels through 2021.

Had the tax credit died or been extended for just another year, “a lot of steam would have been taken out of solar growth and out of the net metering argument,” said John Godfrey, a Washington lobbyist for the American Public Power Association, which represents publicly owned utilities.

“But it’s been extended by five years, so you have fuel for conflict” over net metering for many years now, he said.

Greentech Media Research, an energy research and consulting firm, estimates that renewing the tax credit will increase solar power by more than 50 percent over the five years.

If that tax credit didn’t pass, “we’d be having a different discussion about net metering,” said Greentech analyst Austin Perea. Because it’s been extended, debate over solar policy has shifted from the federal to the state level, he said.

Burden or Benefit for Utilities?

Solar energy is alluring because it’s free and nonpolluting. But the debate over net metering highlights the difficulty utilities and regulators have in integrating solar into the electrical grid.

Solar power only works when the sun is shining directly on the panels. What’s more, there’s no easy or affordable way to store excess solar energy for later use. (But promising research on batteries may solve this problem.) So in order to have electricity whenever they need it, most solar customers have to be on the electric grid.

Net metering is a way to smooth out the peaks and valleys of solar power supply.

It’s a way for solar customers to offset their energy costs by transferring unused energy back to the grid. If they use more than they produce, they pay the usual retail rate. If they transfer more than they use, they get credited at the same rate.

If customers are careful about using electricity from the grid, they can rack up big savings — even more so in sunny climes.

But utilities’ net metering costs are escalating, and many of them are calling the arrangement lopsided. They say it favors solar customers at the expense of utilities and non-solar customers.

The Edison Electric Institute, which represents shareholder-owned electric companies, acknowledged in a position paper that it’s fair for solar customers not to pay for a utility’s power, “because they did not use it.”

“But, they also avoid paying for all of the fixed costs of the grid that delivers power when they need it and takes the power they sell back to the utility,” the institute said. “As a result, these grid costs are shifted to those customers without rooftop solar.”

But solar advocates say the utilities’ arguments zero in on the costs of net metering without accounting for the benefits.

Solar users also tend to rely on the sun during peak periods of energy use, when energy often costs more, Gallagher said. With solar, he said, utilities might not need as high of a capacity for energy production. They might be able to avoid adding power plants.

There are also societal benefits, such as fewer greenhouse gas emissions and more jobs in making and installing solar equipment, he said.

Understanding the total value of solar energy is critical. It will help regulators and legislators decide if they should keep net metering, change it or replace it. That’s why studies are underway in at least 24 states to quantify the value of solar, according to the N.C. Clean Energy Technology Center at North Carolina State University.

Autumn Proudlove, a senior policy analyst at the center, said that the valuation studies and other factors will lead to gradual changes in most states.

“People recognize that net metering doesn’t necessarily recognize the costs to utilities,” Proudlove said. “It’s a rough mechanism. There is a movement to get more granular and have it reflect the actual costs and benefits” of selling excess energy to a utility.

But how? States are answering that question in different ways.

A Body Blow to Solar?

If anyone has heard or read about net metering in recent months, it’s likely because of the Nevada Public Utilities Commission. It decided in December to gut the state’s net metering program, prompting lawsuits, protests and an effort to put the issue before voters.

Given the growing debate over net metering, a decision to phase out retail pricing in Nevada was not surprising. What shocked the solar industry, customers and analysts was that existing customers would not be grandfathered in. Retail pricing for net metering would be closed to all customers, new and old.

“The case in Nevada is unprecedented,” Greentech’s Perea said; it will have a drastic effect on existing users and the solar industry.

The decision also adds fixed charges for solar customers. It upends the financial calculus of solar users when they installed their systems. They assumed net metering would help them recover their hefty investments fast.

Nevada solar customers’ monthly electric bills will go up 50 percent, Greentech estimates; and it will take them years longer to recover their investments, maybe even a decade or two.

The reaction has been swift. Some solar companies are pulling out of Nevada because new installations are expected to slow to a crawl.

“That speaks to a larger theme, which is that rooftop residential solar is very much contingent on net metering design,” Perea said.

California, which accounts for almost half of the 20,000 megawatts of the United States’ solar generating capacity, took the path opposite to Nevada’s. Except for adding some small fees, the California Public Utility Commission decided to keep the current retail net metering scheme in place at least until the end of 2019.

Hawaii, which has the most solar users per capita in the country, took the middle ground: It is phasing out net metering but is grandfathering in existing solar customers.

“Hawaii is a postcard from the future when it comes to energy,” SEIA’s Gallagher said; net metering there is headed for big changes.

Unlike Nevada, Hawaii officials say they are not trying to stymie solar, he said. “They explicitly say they are trying to be fair to both customers and the utilities.”

A Path to Consensus?

If utilities, regulators and the solar industry can agree on two basic things, it’s that solar energy will need financial incentives to be an integral part of energy policy and that net metering is a divisive and imperfect tool.

Despite the broad agreement, however, the pattern in most states has been for the various sides make their case and then for regulators to settle the dispute.

But several states are embarked on a novel approach. They’re having stakeholders — utilities, solar, customers, regulators — hammer out a way to keep solid incentives in place. The goal is to encourage solar without placing most of the cost on utilities.

Maine took a similar approach late last year and came up with a widely applauded proposal that was drawn up by utilities, the solar industry, environmentalists, customers and Maine’s public advocate. The collaborative approach was seen by analysts and various industry officials as a sound model that could work elsewhere.

“Each state is different and they have local factors to consider, but this process worked well in Maine, where they avoided much of the controversy that we’ve seen,” said Proudlove, from the N.C. Clean Energy Technology Center. It’s not what the different parties would have written themselves, she said. “But they all got much of what they wanted and could live with. It’s workable.”

But the proposal needed approval from Maine’s Legislature and politics ensnared the plan. Republican Gov. Paul LePage vetoed it at the end of April, saying it would increase energy prices for homes and businesses that cannot afford solar panels and pick winners and losers in Maine’s energy industries. The House failed to override the veto.

Despite the outcome this year, many analysts such as Proudlove say Maine’s approach is sound and can serve as a model for other states that are grappling with the issue.