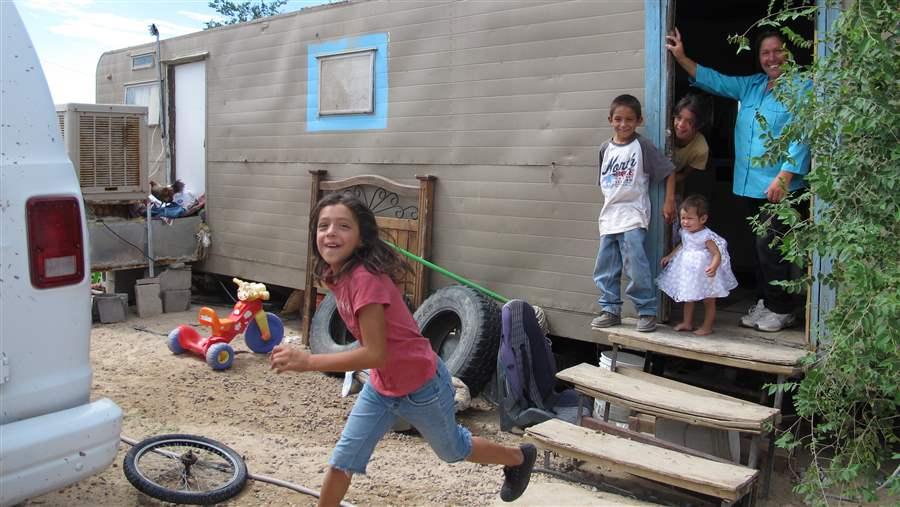 In colonias, like this one in Horizon City, Texas, “contracts for deed” have long been a popular way for developers to sell property and for friends and relatives to sell homes to each other. Texas and other states are taking action to curb abuses.

To Fredie McKinney, buying the mobile home seemed like a great idea. It was big enough for McKinney, his wife and his elderly mother. The fenced 8-acre property in Harwood, Texas, was perfect for their dogs and horses. McKinney only had to pay $500 to move in, two years ago, with the understanding that after paying the developer $1,000 a month for 25 years, he’d own the property.

At least, he says, that was the plan. Now the developer is demanding McKinney pay back taxes owed under the contract — money 68-year-old McKinney says he shouldn’t have to pay— and county officials say the entire subdivision may be illegal.

McKinney has a “contract for deed,” a financing arrangement common in some low-income communities that can leave homebuyers in a legal mess. Unlike a mortgage, buyers don’t get title to the property until they’ve completed their last payment. They have to maintain the property and pay property taxes, but they don’t build any equity. They usually don’t get a homeownership tax break, and if they miss a monthly payment they can lose the home and all the money they sank into it.

Texas passed a law last year that will help McKinney and homebuyers like him claim titles to the properties they’re paying for, the latest in a series of reforms. Other states also are adding protections for buyers involved in this archaic form of financing.

Nobody knows how many U.S. homebuyers have entered into contracts for deed. The U.S. Census Bureau’s American Housing Survey pegged the number at 3.5 million in 2009, but hasn’t asked the question since.

In some communities, the contracts may be on the rise. The recession eroded people’s finances and drove banks and credit unions away from risky borrowers. This expanded the market for contracts for deed, rent-to-own plans, and leases with option to purchase — seller-financed deals that don’t require a credit check and sometimes don’t even require a down payment.

“The underbelly of real estate, is what I call it,” said Robert Doggett, an attorney with Texas RioGrande Legal Aid who specializes in housing law.

Major investment firms have bought up distressed properties across the Midwest and South and are using contracts for deed to sell them. After The New York Times reported on the practice in February, New York state regulators subpoenaed two of the firms and the federal Consumer Financial Protection Bureau assigned enforcement lawyers to investigate.

Texas Rep. Terry Canales, a Democrat who practices law in a town about an hour’s drive from the Mexican border, said contracts for deed are “a continuing problem” in South Texas.

Along the border, thousands of very poor people live in colonias — unincorporated communities that often lack running water, paved roads and other basic infrastructure. In these mostly Hispanic neighborhoods, contracts for deed have long been a popular way for developers to sell property and for friends and relatives to sell homes to one another.

These contracts are typically signed without help from real estate agents and attorneys and involve buyers who know very little about the law. In colonias and other informal subdivisions, some contracts are handwritten on scraps of paper or not written down at all, according to a 2012 University of Texas at Austin study.

Many homebuyers with seller financing who spoke to the UT-Austin researchers didn’t know if they had a contract for deed or some other product, said Heather Way, a co-author of the study and the director of the community development clinic at UT-Austin.

Inflated prices and high interest rates, such as the 10 percent rate McKinney pays, are common features of contracts for deed. But the biggest problem, Doggett says, is that it can be unclear who has a legal right to the property. Few hopeful buyers manage to pay off the home and gain title to it.

The buyer might find out, as McKinney has, that the home violates local land use laws and shouldn’t be there in the first place. Roads throughout the neighborhood he lives in haven’t been paved, despite the developer’s promises. The family drinking water comes from 5-gallon containers McKinney fills up at Wal-Mart.

The strictest way to govern contracts for deed, other than banning them entirely, is to treat them as a kind of mortgage. That’s what Oklahoma has done since the 1970s, and what Texas’ new law will allow. Other states have added protections for buyers, but none have gone quite that far.

It’s taken Texas many years to get to this point. The first step was a 1995 law that applied only to colonias. Among other things, the law required sellers to disclose any problems with the property and added rights for buyers facing foreclosure who have made a certain portion of their payments.

Texas broadened its colonia law to apply to the whole state in 2001, after a tornado tore through Fort Worth. The storm revealed many homebuyers with contracts for deed who couldn’t access insurance payouts or government loans for disaster relief because their ownership was unclear.

The state passed follow-up legislation in 2005 to close loopholes and add more protections, such as applying contract-for-deed law to lease-to-own contracts.

Other states have similar reforms on the books. Like Texas, North Carolina forbids sellers from putting property burdened with certain liens on the market. Minnesota requires disclosures, like Texas, but unlike Texas the state also caps the interest rate for lower-dollar contracts.

Texas’ laws have largely pushed developers away from contracts for deed, the UT-Austin study found, but abusive practices remain. “The challenge with all seller financing is that it’s really under the radar screen,” Way said. Her researchers counted 6,500 homebuyers across six counties who held contracts for deed that couldn’t be found in government records.

The law signed by Republican Gov. Greg Abbott last year took yet another step to protect homebuyers. Now buyers who file their contracts for deed with the government automatically get title to the property. “You convert it into a mortgage, essentially,” Doggett said. Once buyers have title, they can also claim a property tax break.

Lawmakers didn’t want to ban contracts for deed outright. “This is a tradition that’s been passed down for generations,” Canales said. For some people, it’s the only kind of home financing available.

For the new law to truly be effective, the state also has to invest in enforcement and legal services for vulnerable buyers, Way warns.

Lack of oversight has been a big problem for McKinney and the 200-odd residents of Century Oak Estates. County officials have allowed the troubled development to expand for 10 years, the Austin American-Statesman has reported. Officials don’t even know how many people live there.

As a disabled veteran over 65, McKinney qualifies for a state property tax exemption. But he never filed his contract with the tax office. He said he was told the developer needed to file the original version, and the developer never did.

“There’s several pages to it; it’s mostly in legal language,” McKinney said of the contract itself. “I’m not that much on legal stuff.”

Some Century Oak residents are now applying to Legal Aid for representation.

The state’s new law may make it easier for the development’s residents to keep their homes, Doggett said. If McKinney can file the contract, “then technically he’ll own the dirt.”