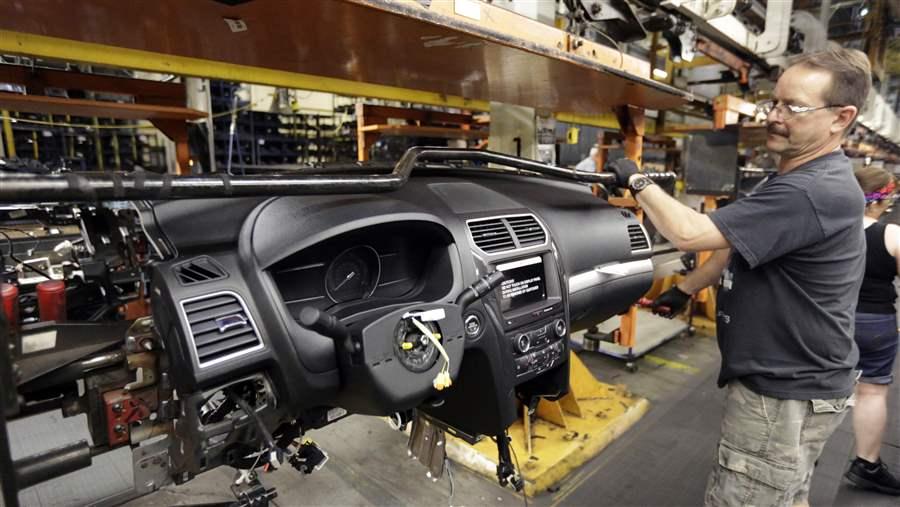 An employee works on an SUV panel at the Ford assembly plant in Chicago. Illinois and other states that are forecast to lose population need to take steps to maintain a skilled, educated workforce.

In many parts of the Northeast and Midwest, population growth is slowing at an unprecedented rate as people are getting older, women are having fewer children, and more people are moving out than in — and that signals big economic trouble ahead.

New population projections out this month add to a growing list of demographic patterns indicating that many states in those regions will face a shrinking workforce over the next two decades, which could propel their economies into a downward spiral from which it would be hard to recover.

The population of prime working-age adults, ages 25 to 54, will decline in 16 states, most of which are in the Northeast and Midwest, from 2010 to 2040, according to a Stateline analysis of projections released by the University of Virginia’s Demographics Research Group in the Weldon Cooper Center for Public Service.

“You have young people moving out,” said Mark Mather, a demographer at the Population Reference Bureau, an international research center. “You are losing your skilled workforce. And so businesses don’t want to work there. And there is less demand for services. So everything feeds into itself, for a negative downward spiral.”

State officials in Illinois, Maine and Pennsylvania say they’re already seeing holes in the workforce as baby boomers near retirement. To stem the trend, they are trying to ensure that young people are educated and trained for existing industries, and to help bolster the sectors that show promise of expanding.

But the states can’t buck the trend entirely, say officials and researchers such as Michael Lucci, a vice president at the Illinois Policy Institute, a research group that advocates for lower taxes.

Cold weather states, for example, can’t stop people from migrating to faster-growing Sun Belt states for the warmer climate. Instead, they suggest that troubled states in the Northeast and Midwest make policies that attract people and businesses in their region. Illinois, for instance, should look to other Rust Belt states. Maine should look to Massachusetts and New Hampshire.

It would be the first decade in U.S. history that so many states see their population fall.

It’s hard to know if the trends will hold, said Qian Cai, the director of the University of Virginia group that released the projections. In 25 years, she said, immigration policies and fertility habits could change.

For the population to replenish itself, the fertility rate would need to be at least 2.08. But researchers, including Mather, say they don’t see that happening. Mather attributes the lower rate in part to more women working and waiting longer to get married and have children.

The rates are lowest in the Northeast, where there are fewer young residents. Massachusetts, New Hampshire and Rhode Island have the lowest rates: less than 1.6 in 2014.

Another trend that is sure to continue: Americans are getting older and living longer. The population of people 65 and over in the U.S. will increase 72 percent from 2015 to 2040, to 82 million, while the overall population will increase by 18 percent, to 380 million, according to U.S. Census Bureau projections.

It’s hard to predict what the nation’s workforce will look like as the population grows older. More people are working past 65, the traditional retirement age — another trend that is expected to continue. From 1990 to 2010, the percentage of people 65 and over who were working increased from 12 to 16 percent, according to census data.

Most of the 11 Northeast and Midwest states that will see a decline in their working-age population from 2010 to 2040 already have older than average populations, according to federal data.

Continued migration to the South, especially by young people ages 18 to 30, is contributing to the aging population in the North and East, said Ronald Lee, a demographer at the University of California at Berkeley.

Many of the fastest-growing states in the next 25 years will be in the Sun Belt, according to the newly released projections. The populations of Texas and Florida are expected to grow by more than 50 percent from 2010 to 2040, to 41 million and 28 million, respectively. Georgia will add 3 million and go from the ninth largest state in 2010 to the sixth largest in 2040, with 13 million people.

Illinois, whose state government faces a budget shortfall, already is worried about outmigration. It lost more people to outmigration than any other state from 2014 to 2015, about 67,500 residents.

The state is especially concerned about losing young, college-educated residents, according to Julio Rodriguez, who directs the state’s Office of Employment and Training. To try to stave off the exodus, the state hopes to develop industries with high potential for job growth and a need for young workers, such as advanced manufacturing, agribusiness and biotechnology.

The working-age population in Illinois is projected to decline 9.4 percent through 2040. The manufacturing industry there expects to lose more than half of its workers to retirement in the next decade, Lucci said.

To attract young workers and new companies, the state needs to loosen regulations and lower property taxes, he said.

Illinois’ population loss can be attributed in part to the declining African-American population in Chicago, which fell by 17 percent, or 181,500, from 2000 to 2010, according to an analysis of census data by Rob Paral, a demographer based in Chicago. The decline in Mexican immigration has also slowed population growth.

What happens to the population of Northeast and Midwest states will depend in large part on whether foreign immigration picks up again, Mather said.

In Pennsylvania the fertility rate is among the lowest in the nation, at 1.76, and 23 percent of residents there will be older than 65 in 2040. The state is projected to lose 5.8 percent of its working-age population. But Kathy Manderino, the state’s secretary of Labor and Industry, said she is hopeful that foreign immigration and people working past retirement age can help sustain the workforce.

The state also needs to retain the young people graduating from its universities, especially in cities such as Philadelphia and Pittsburgh, Manderino said.

To be successful down the line, the state should be making large investments in education and training to improve quality of life and attract businesses, said Mark Price, a labor economist at the Keystone Research Center, a public policy group based in Harrisburg.

Maine — the nation’s oldest state, with a median age of 43.5 and one of the lowest fertility rates, 1.66 —  already is witnessing a labor shortage in some industries from which baby boomers are retiring, said Julie Rabinowitz, a spokeswoman at the state Department of Labor.

To retain and attract young skilled workers, Republican Gov. Paul LePage submitted measures this year targeted at student debt. One bill, which he signed in April, created a new Science, Technology, Engineering and Math loan program. Students in those fields who agree to live and work in Maine will pay no interest on their loans. Another bill expanded a tax credit for some students.

LePage wants to eliminate the state’s income tax, a move that Rabinowitz said would help Maine to compete economically with nearby states. Neighboring New Hampshire, for example, has fewer income taxes and no sales tax.

The demographic trends are a concern, Rabinowitz said, but Maine has always been “a big state with a small population” trying to use whatever resources it has in the best way it can.