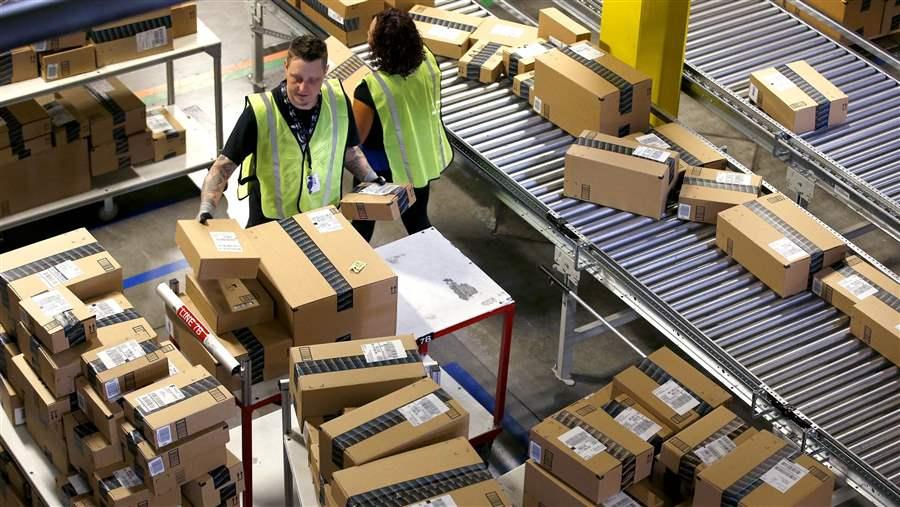 Amazon employees organize outbound packages. States are hoping the courts will allow them to collect more in sales taxes from online purchases.

Frustrated with federal inaction and worried about declining revenue as more Americans shop online, states are eyeing a South Dakota court case that could allow them to collect more in sales taxes from online purchases.

Many states have laws that require online retailers to collect sales taxes if they have a store, warehouse or subsidiary in-state, or if they contract with a local business to advertise their products. The laws conform to a standard the U.S. Supreme Court established in its 1992 ruling in Quill Corp. v. North Dakota.

Online companies that don’t fall into any of those categories don’t collect sales taxes, and research suggests states are losing out on billions in revenue as online shopping grows. A 2012 estimate pegs the losses at $11 billion annually, according to research from the University of Tennessee and the National Conference of State Legislatures (NCSL).

Online businesses have long contended that collecting taxes in the 45 states that tax retail sales would be too burdensome. But states say that argument is outdated because new software can calculate the tax and about half the states have adopted standardized sales tax rules.

South Dakota hopes a law it enacted this year will force the courts to take a second look. The measure requires any online business that sells more than $100,000 worth of goods in the state or processes more than 200 orders for South Dakotans to collect a sales tax.

South Dakota’s law goes beyond the Quill decision by stating that online businesses have a presence in the state simply because of the volume of sales they have there. South Dakota and other states are hopeful the U.S. Supreme Court will reconsider its Quill ruling based on that logic. They are pinning their hopes on Associate Justice Anthony Kennedy’s remarks in a Colorado case from last year. He said it may be time to reconsider Quill, calling it “questionable even when decided.”

“States have been frustrated by inaction from Congress but emboldened by Justice Kennedy,” said Joe Crosby with Multistate Associates, a lobbying firm that closely tracks state issues. He said states are eager to expand the concept of presence for tax collection purposes, and in South Dakota that means offering a test case.

NetChoice, an online retail group, and the American Catalog Mailers Association (ACMA), whose members process many of their orders online, have sued South Dakota in a bid to overturn its new law.

“What makes the South Dakota bill so interesting is that they basically put an entire legal brief in the bill,” said Max Behlke with NCSL.

The text of the law contains the state’s arguments, saying online retailers are benefiting from the state’s economy while eroding its tax base as the state has no income tax.

South Dakota is likely to lose the case — at least initially — even in its own state Supreme Court, according to Michael Mazerov of the Center on Budget and Policy Priorities, a left-leaning think tank. But that’s the point, since the ultimate goal is to put the issue before the U.S. Supreme Court.

“The South Dakota law is clearly inconsistent with Quill, and it was intended to be,” Mazerov said. “The state Supreme Court may be reluctant to overturn on its own a U.S. Supreme Court decision.”

Much of the argument revolves around how difficult it would be for online businesses to collect sales taxes and transfer them to the states.

Mazerov and those who support South Dakota’s bid say states have done much since 1992 to make it easier for online businesses to collect the taxes. Twenty-four states, for example, have approved the Streamlined Sales Tax Agreement, which standardizes which items are taxable and which are exempt.

Supporters also point to new software that makes it easy to calculate the correct tax, working alongside existing software that manages orders, Behlke said. Online marketplaces, such as eBay Inc., offer it to people and companies selling their goods on their sites, he said.

“You’re talking about some of the most innovative tech companies in the world, and they don’t have the technology to do this?” Behlke said. “And they say, ‘Well, we do, but we’re worried about the small guys.’ But the small guys are selling on their sites.”

But online business advocates say the burden is too great and states are overstepping their bounds.

“It’s like asking retailers to check the licenses of every single person that comes in and collect the correct sales tax with the correct definition of their purchase,” said Hamilton Davison, president of the ACMA.

Steve DelBianco, the executive director of NetChoice, argues that states are exceeding constitutional bounds because only Congress is empowered to regulate commerce across state lines.

“We’re confident that we can uphold 200 years of federal doctrine of physical presence requirements on ‘kill-Quill bills’ like South Dakota’s,” DelBianco said.

They modeled their laws on a 2010 Colorado law that requires online retailers to track Coloradans’ annual purchases and send them a notice reminding them they may owe taxes — with the goal being to encourage them to pay them. The business would also need to send a similar summary to the Colorado Department of Revenue.

The 10th U.S. Circuit Court of Appeals in February upheld the Colorado law, which was challenged by the Direct Marketing Association. The U.S. Supreme Court had remanded the case to the circuit last year.

The Colorado law’s sponsor, Democratic Sen. Rollie Heath, said that despite the law being upheld, he isn’t certain how effective it will be. He hopes, however, that online businesses will be encouraged to go ahead and collect the taxes — something Amazon.com Inc. started doing in Colorado in February. Court papers from the state said companies not collecting the tax cost Colorado $170 million in 2012 alone.

The Oklahoma law is very similar to Colorado’s. State Rep. Chad Caldwell, a Republican, said he sponsored the law because only 4 percent of Oklahomans were paying taxes on products purchased online as part of their tax returns. “Certainly more than 4 percent of people are buying stuff online,” he said.

The Louisiana law requires many internet businesses earning more than $50,000 in the state to collect the sales tax if they have substantial ties to a Louisiana business or sell products similar to what can be purchased in-state.

State Rep. Walt Leger, a Democrat, said the law will cover nearly any business earning more than $50,000, though he said the state can expect challenges in enforcing the law.

“The $50,000 in receipts number we picked to make sure we focused collection activity of businesses big enough to justify the public tax dollars spent on collecting it,” he said.

Leger said states are well within their rights to pass regulations on companies doing business in the state. But even if the U.S. Supreme Court agrees, the question would remain whether processing and collecting the taxes is easy and affordable for online sellers.

DelBianco of NetChoice said it’s not. “They just don’t have an inexpensive and simple way to collect.”

J. Craig Shearman of the National Retail Federation, which represents online and brick-and-mortar companies of all sizes, said that’s no longer true.

“The argument against it is that it will hurt the small online sellers,” he said. “That might have been true in 1992, but that was a generation ago. As the saying goes, there’s an app for that.”