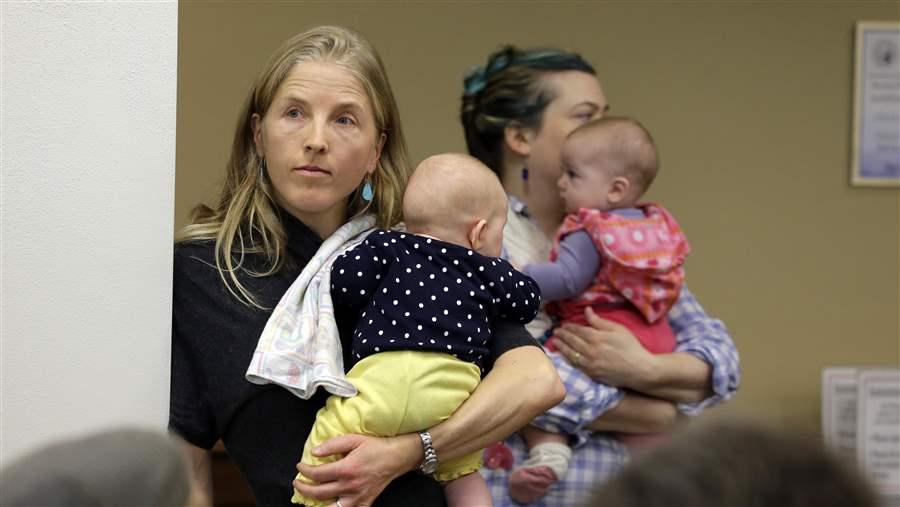 Parents wait to testify against a Washington bill that would have kept families from opting out of mandatory vaccinations for personal or philosophical reasons.

This story has been updated to say that Colorado’s new vaccination requirements are rules issued by the state’s Board of Health.

When Jennifer Stella’s two children were babies, she made sure they got all the usual vaccines. But when one started having seizures and the other developed eczema after they’d gotten immunizations, the Vermont woman decided her kids would no longer get shots required to attend school.

Stella, a co-founder of the Vermont Coalition for Vaccine Choice, is among a growing number of parents who are opting out of childhood vaccinations because they’re worried about their safety. Public health experts say the movement is leading to outbreaks of nearly eradicated dangerous diseases, such as measles and whooping cough, among clusters of unvaccinated kids.

All states require children to get vaccinated to attend school, and immunization rates across the nation remain high, with 92 percent of children between 19 months and 35 months getting the shots to protect against potentially deadly measles, mumps and rubella (MMR).

But even a small number of unvaccinated people can undermine the immunity of the larger population, which is leading public health officials and vaccine advocates to push for changes. Some want to educate parents about the risks of forgoing vaccines and fight what they say is misinformation about the risks posed by the vaccines. Others have pushed lawmakers to eliminate exemptions from state vaccine requirements and sought to make it more difficult for families to qualify for the exemptions that remain.

After an outbreak of measles last year that was linked to Disneyland, in California, state legislators there rolled back laws that allowed children to go without vaccines based on their parents’ beliefs. Now, children in California can only be exempted from vaccines if their doctor determines immunization to be unsafe for them.

In nine states — Florida, Michigan, Minnesota, New Jersey, New York, Oklahoma, Pennsylvania, Utah and West Virginia — lawmakers introduced bills that would require that parents receive information about the risks of skipping vaccination before their children can be granted exemptions. The information would come from their doctor or local health department, or through state-approved resources such as videos and online courses.

But the proposals have met strong resistance from groups such as the National Vaccine Information Center, which favors laws that allow parents to opt out of vaccinating their children based on personal, religious or conscientious belief.

The group’s co-founder Barbara Loe Fisher said parents should be able to decide whether their kids can be vaccinated. Many parents worry that vaccines cause illness and permanent disabilities, she said, although links between vaccines and autism have been discredited by the Centers for Disease Control and Prevention.

And, Fisher said, eliminating exemptions would mean that unvaccinated children in many states wouldn’t be able to attend school.

“We believe that it is a human right to be able to exercise conscientious and religious beliefs, in terms of protecting the child,” Fisher said. “And we believe the child has a right to an education.”

Fisher and other vaccine skeptics say diseases such as measles are bound to pop up, even in communities with high vaccination rates. But public health officials point out that because these diseases are highly contagious, a large segment of the population needs to be vaccinated in order to protect those, like children being treated for cancer, who cannot get immunized for medical reasons.

As the number of unvaccinated children grows, so does the risk of an outbreak, said Dr. Patricia Quinlisk, the state epidemiologist for Iowa. “This is not an individual decision; this is a decision that affects the whole community.”

A growing number of Iowa families are choosing not to vaccinate their children under a religious exemption law. The number of children in kindergarten through 12th grade who skipped vaccinations for religious reasons jumped to 6,737, a 13 percent increase from last school year to this school year.

The exemptions tend to occur in communities where parents share opinions about vaccine safety or hold similar religious beliefs, Quinlisk said, and there’s not much the state can do to challenge parents’ decisions.

“We can’t question it,” Quinlisk said. “We have to accept it.”

Recent disease outbreaks have drawn attention to the growing debate over whether to vaccinate. In the Disneyland case, 45 percent of the California residents who got sick were unvaccinated. Five years earlier, also in California, 10 children died from whooping cough.

Other states have seen their own whooping cough outbreaks, which shuttered schools and child care facilities. One of those states is Colorado. The executive director at the Colorado Children’s Immunization Coalition, Stephanie Wasserman, said it’s just a matter of time before the state sees a measles outbreak.

Less than 87 percent of Colorado kindergarteners are vaccinated against MMR, the lowest rate in the country for that vaccine, according to CDC data. In Mississippi, where there are no religious or philosophical vaccine exemptions, almost 100 percent of kindergarten children have received the MMR vaccine.

But it’s about to get harder for parents to exempt their children from regular vaccines in Colorado. New rules issued by the state Board of Health that take effect in July will require parents to apply for an exemption every time their children are due for a vaccine, rather than filing one exemption for an entire childhood. Proponents hope the extra legwork will lead families to think twice about skipping shots.

“It shouldn’t be easier to get an exemption than it is to get a vaccine,” Wasserman said.

The rules will also force schools to report their vaccination numbers so parents can choose not to send their kids to a school with a low vaccination rate.

Public health experts like Diane Peterson, an associate director at the Immunization Action Coalition, say it’s been too easy to get exemptions, creating entire communities of unvaccinated children that have been directly tied to outbreaks of disease.

To boost vaccination rates, some states have tried to educate parents about the risks of skipping important shots. In 2012 California passed a law that requires parents to meet with a health care provider to discuss the risks and benefits of vaccines before they are granted an exemption.

This session a Florida measure that would have required parents to watch an educational video before they are granted an exemption was pulled by its sponsor before lawmakers could even consider the legislation.

Proposals like the one in Florida have met stiff resistance from groups that oppose mandatory vaccinations. “All states basically are struggling [from] an erosion of the public’s trust in vaccines because of the misinformation that is being shared on social media,” Wasserman said.

Parents who want to be able to decide if and when their children receive vaccinations are paying attention to the state attempts and are working hard to make sure exemption laws stay in place, Fisher said.

In Vermont, Stella said the new law won’t stop parents from applying for exemptions because they will file under the religious exemption provision. “People need to be able to make their own choices about how they protect their health.”