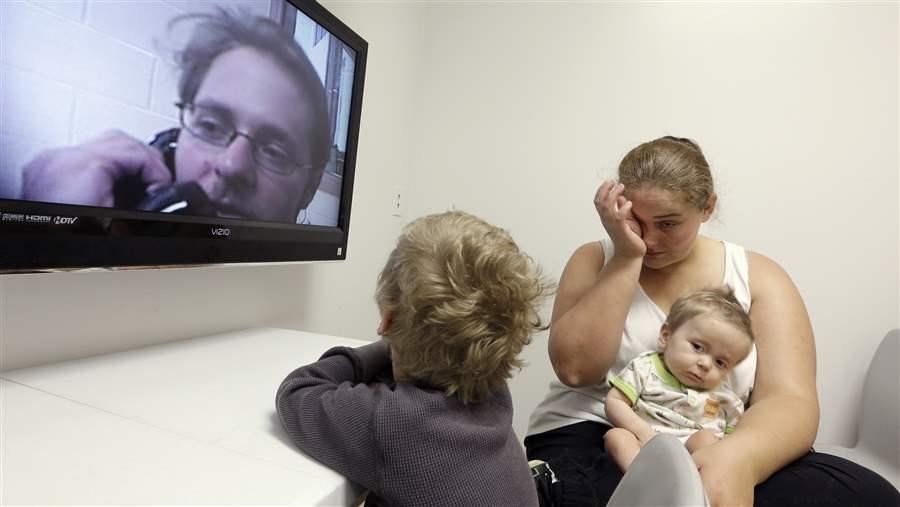 An inmate is shown on a television screen as his family visits him via video conferencing at a county jail in Texas. About 1.7 million children have a parent behind bars.

Jamaill never knew his mother. When he was 1, his father was incarcerated, and Jamaill got to know him largely through letters and phone calls. Twice a year, he would trek from Brooklyn to an upstate New York prison to visit — a trip that involved a plane ride, a long drive and an overnight stay in a motel.

Now, the 10th-grader’s father has been transferred to another prison even farther away. So they’ll stay in touch with “televisits,” video-conferenced meetings. Jamaill doesn’t think it should be so hard for kids to see their imprisoned parents. And that’s what he told New York state legislators in March.

“Incarcerated parents need to be closer to home,” said Jamaill, 15, who lives with his grandmother and doesn’t want his last name used because he doesn’t want to further stigmatize his father. “Some people have to drive nine, 10 hours to see their parents — and then only have 30 minutes to talk to them.”

Many states are beginning to look at a growing body of research that shows that having a parent behind bars can have a destabilizing effect on an estimated 1.7 million children like Jamaill. The separation can have costly emotional and social consequences, such as trauma and trouble in schools, homelessness, and bigger welfare and foster care rolls.

Some states are encouraging greater contact between the children and their parents by using new technology such as televisiting, or by placing parents in the closest correctional facility. And some are trying to intervene when a parent is charged, tried and convicted of a crime to provide emotional support and a stable home for the children.

In New York, for example, the Senate’s corrections committee advanced a bill in March that would create a pilot program that places sentenced parents in the nearest jail or prison.

The federal government allows states to use funding from the National Family Caregiver Support Program to provide grandparents and other elderly relatives who care for the children with services such as counseling. Washington, for example, has a statewide network of “kinship navigators” that connects families and extended relatives with legal services, health care and parenting classes.

Some states also are looking at ways to better reconnect children with their parents after they leave jail or prison, and to help ease the parents back into society to provide a more stable family life for their children.

In Georgia, a statewide council on criminal justice reform tailors policy and services designed to reduce the barriers to employment after a parent is released from prison. In California, the state suspends child support payments for anyone who is incarcerated for more than 90 days. This prevents late fees on child support payments from piling up while parents are locked up, which can often create insurmountable debt when they are released.

In San Francisco, a coalition of nonprofits, representatives of government bodies and advocates work together to ensure the well-being of children of incarcerated parents at every step of their involvement with the criminal justice system. This includes protocols on steps police officers should take to minimize trauma on children who witness a parent’s arrest, sentencing guidelines and life after prison.

“The trauma associated with having an incarcerated parent is like that of divorce or domestic violence,” said Scot Spencer of the Annie E. Casey Foundation, a research and advocacy group that focuses on child welfare. “There’s an emotional and an economic impact.”

More than 5 million children, or one in 14, in the U.S. have had a parent in state or federal prison at some point in their lives, according to the Casey Foundation.

Their numbers swelled by 79 percent between 1991 and 2007, according to U.S. Bureau of Justice Statistics (BJS) figures, largely driven by tough drug laws and mandatory sentencing.

Thirteen percent of the children in Kentucky have had a parent behind bars, the largest percentage of any state, according to an April report from the Casey Foundation. Indiana follows at 11 percent. New Jersey has the lowest, at 3 percent, followed by New York, at 4 percent.

Children of color are much more likely to have a parent in prison. One in nine African-American children had a parent behind bars in 2008, according to a Pew Charitable Trusts report (Pew also funds Stateline). One in 28 Latino children had an incarcerated parent and one in 57 white children did.

Maintaining close connections with a parent behind bars appears to be good for a child’s emotional well-being and for the parent, said state Sen. Gustavo Rivera, sponsor of the New York bill to set up a pilot project to move incarcerated parents closer to their children. Closer family bonds tend to reduce recidivism, he said, and his project can help demonstrate that.

Kiara, an 18-year-old high school senior from Brooklyn, agrees that it’s important for children to be close to their incarcerated parents. Her father has been in and out of prison since she was a baby. Mostly, they’ve kept in touch through letters and email, and an occasional visit.

These days, her dad is incarcerated at New York’s Coxsackie Correctional Facility, more than a two hours’ drive north from Brooklyn. The last time she saw her dad was in November. Visiting him is a hassle, she said, because it involves long lines and hours of waiting. “Then I only have an hour to talk to him,” said Kiara, who doesn’t want her last name used because she said she doesn’t trust anyone but her family and counselors with information about her father’s incarceration.

But the effort to stay close is worth it, she said. “We grew a good relationship,” Kiara said. “There’s no negativity, only joy. I can tell him things I wouldn’t be able to tell my mom. He gives me good advice. He tells me he doesn’t want me to end up like him.”

Many children can fall through the cracks when a parent is sent to prison, especially if the parent was the child’s sole support, some children’s advocates say. And it can be difficult for states to help them.

In New York, for instance, no city or state agency is solely responsible for coordinating services and tracking the well-being of the more than 100,000 children with a parent behind bars, said Tanya Krupat, program director for the NY Initiative for Children of Incarcerated Parents at the Osborne Association, a nonprofit based in Brooklyn.

Incarceration also often forces families deeper into poverty and debt, the Casey Foundation report said. Their families are more likely to rely on public welfare programs such as food stamps and Temporary Assistance for Needy Families. And these children may be more likely to join the other 400,000 children throughout the U.S. in state foster care.

When an incarcerated parent is released, the families continue to struggle with finding work and a place to live because of the stigma attached to a criminal conviction. That’s prompted some states to pass so-called ban the box laws that prohibit employers from asking about a person’s criminal history in job applications as a way of encouraging employment after prison.

Georgia, which has an incarceration rate 32 percent higher than the national average, has taken several steps in the past few years to help ease the transition from prison to society and help former inmates gain employment — with a goal to help provide stability for their children.

This year, the Legislature passed bills to lift the state’s lifetime ban on food stamps for people with felony drug convictions, allow judges to seal the records of first-time offenders at sentencing, help ease the way to get occupational licenses and provide retroactive reinstatement of driver’s licenses revoked for drug offenses. Lawmakers also created a tax incentive program that encourages employers to hire parolees.

In Brooklyn, Jamaill is counting the days until his father is released from prison, although he will be 20 by then.

He plans to be in college, so he’s not sure if he’ll be living with his father, or if his father will have to live in a halfway house.

There is one thing he is sure about, however. “The second they tell me he’s out, I’m driving out there,” he said. “I’m going to be right there, waiting for him.”