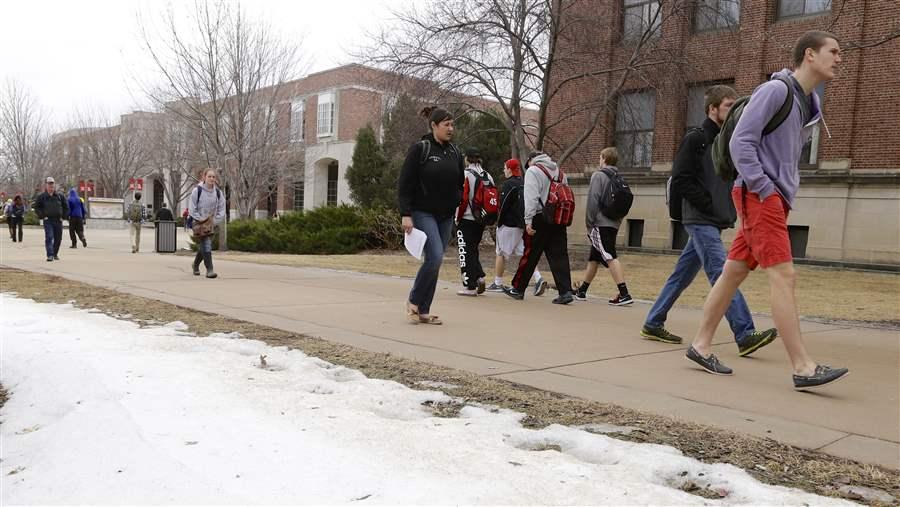 What if lowering student debt was as easy as sending students a letter?

Indiana University officials say borrowing by undergraduates at the school has dropped 18 percent since 2012. That’s when the university began sending students annual letters that estimate their total loan debt and future monthly payments, as part of a push to boost their financial literacy.

Inspired by the results at IU, Indiana last year began requiring all colleges that accept state aid to send letters. Nebraska followed with a similar law this spring.

Republican Rep. Casey Cox, the author of the Indiana legislation, says he gets phone calls from officials in other states interested in the idea. And U.S. Sen. Joe Donnelly, an Indiana Democrat, has proposed requiring the federal Department of Education to keep a list of financial literacy best practices, perhaps including student loan letters.

A growing number of students need to borrow — and borrow heavily — to finance their college educations. And giving them more information about their debt may help change their borrowing habits. Research suggests that students say no to loans when they’re told how much they’re borrowing and how loans could weigh on them in the future.

But the approach carries risks, too. In some cases, borrowing less may make it harder for students to graduate. They might have to spend more time working and less time studying. Or they might opt for less expensive institutions that do less to guide them.

Although IU officials think financial literacy makes a difference, they haven’t actually proven that the letters — or any other initiative — drove borrowing down.

“From a research perspective, we haven’t gotten to the point where we can say it had an impact,” said Victor Borden, professor of educational leadership and policy studies at IU Bloomington. He and a team of researchers are scouring data to find out exactly what worked.

Students Who Borrow Too Much

Cox, the author of the Indiana law, is one of the youngest members of the Legislature. The 30-something is still paying off his law school loans.

He said he was inspired by his alma mater’s efforts and his own memories of how tempting it was for students to borrow as much as possible. “At a young age, you may not really understand the consequences of that debt,” he said.

Some students may not know they’re borrowing at all. Researchers at the Brookings Institution, a centrist Washington, D.C., think tank, dug into federal survey data in 2014 and found that over a quarter of first-year college students with federal student loans didn’t know their loans came from the federal government. About half of those students had no idea they were borrowing money to pay for college.

Students can be confused for a number of reasons. Their parents may be handling the financial aid details, for example. The way student loans are packaged and disbursed doesn’t help, said Andrew Kelly of the American Enterprise Institute, a conservative-leaning Washington think tank.

A few months after a student sends a financial aid application to the federal government, an award letter arrives from the college, which may knock a chunk of money off the tuition bill — or cover it entirely. “It just kind of arrives, like manna from heaven,” Kelly said of financial aid.

Behind the scenes, two things happen: The government calculates how much the student’s family can afford to pay for the education. And the college calculates the total cost of attendance, including living expenses. Both of those calculations determine how much federal and state need-based grants, work-study aid and loans the student can receive. The college may provide scholarships, too.

Students usually accept whatever aid colleges award them without questioning whether they could live more cheaply — and borrow less. And, Cox has said, some students may borrow extra money to fund a better lifestyle.

The temptation to borrow too heavily may be particularly strong for part-time students, who can borrow the same amount for living expenses as full-time students. The students may end up borrowing for many years, racking up more debt or even hitting federal loan limits before they manage to graduate.

When the news broke that borrowing at IU had fallen, students there told Bloomberg the loan letters had spurred them to avoid debt by working more, looking for scholarships, and avoiding spending on living expenses like new cellphones.

But it’s not clear that IU’s letters are driving the decrease in borrowing. The letters were part of a bigger push to educate students about money that included counseling, a podcast, and a new website that offers quizzes and calculators. The university also has changed its financial aid process to make it easier for students to say no to loans.

IU also has been pushing its 94,000 undergraduates to enroll in 15 credits each semester — the pace necessary for graduation in four years. “It might not necessarily be that students are taking out less money each semester, but that they’re graduating on time,” Schuman said.

Across IU’s seven main campuses, 42 percent of full-time students seeking a bachelor’s degree graduate in four years, up from 38 percent five years ago according to the latest data. This past year, the cost of attendance — including tuition, fees, room and board —ran to $21,412 for in-state IU students.

A team led by IU’s Borden will use statistical analysis to parse all the factors that could be affecting borrowing, from the availability of state grants to student wealth. They will try to determine whether the financial aid letters, the literacy push, or the change in loan processing did the most to lower overall debt. The university made other changes during the period, such as increasing institutional grant aid, which also could have made a difference.

Other research shows that a combination of letters and counseling can change students’ borrowing and academic behavior.

Montana State University students with high debt who received letters alerting them to that debt and encouraging them to seek counseling borrowed an average of one-third, or $1,360, less the next semester, according to a 2015 analysis by Montana State and Federal Reserve researchers.

The students went on to take more credits and earn better grades the following semester, the study found. The same research team found in a forthcoming study that students who received the letters were 2 percentage points more likely to switch to a major associated with higher-paying jobs.

The federal government mandates that students undergo counseling twice, once before they receive loans and once after they leave the institution. (Most colleges provide this information online.) The Indiana and Nebraska laws don’t require colleges to add additional counseling, although many colleges already offer services similar to IU’s.

Students Who Borrow Too Little

Yet student loan letters can also have a downside. They can deter students from taking out loans they really need to finance their education.

“It’s just a really complex issue,” said Robert Kelchen, an assistant professor at Seton Hall University who studies student debt. “The policy discussion is that students need to borrow less. And the reality is that some students may be able to borrow less, but some may need to borrow more.”

Students may choose to work their way through college to graduate debt-free. But by working rather than studying, they may find it harder to graduate on time — or to graduate at all.

“The one thing we don’t want is students who are so stressed about their finances they can’t focus on their academics,” Schuman said.

Whether a student is borrowing too much or too little depends on a range of factors, from family wealth to the chosen degree and whether the student graduates, said Kelly of the American Enterprise Institute. “Someone who borrows the maximum amount for a solid program at a community college or a four-year college and finishes — it’s hard to say that they overborrowed,” he said.

Schuman said he has had to tell students that debt isn’t necessarily a bad thing, particularly when they’re working toward a degree that will lead to a high-paying job. He recently talked to a chemical engineering major at another institution who had about $10,000 in debt and was scared it was too much. “She was going to be fine!” he said.