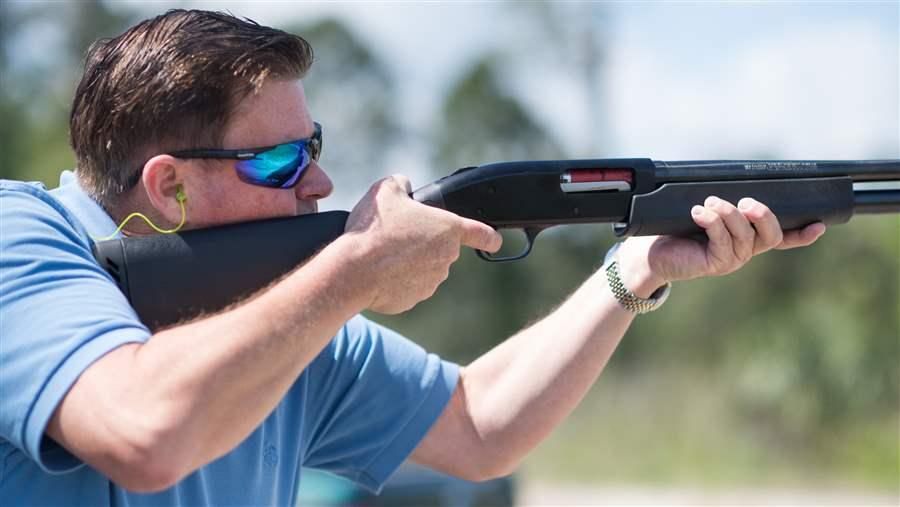 iGun Technology owner Jonathan Mossberg demonstrates his smart shotgun, which will only fire when in close proximity to a ring he is wearing. He would like to develop a smart handgun for the public, and so would some gun safety advocates.

Jonathan Mossberg has already made a smart gun — a shotgun that can only be discharged by someone wearing a ring that communicates with a chip inside the weapon, unlocking it.

The gunmaker’s smart guns, there are about 25 of them, are nearly 20 years old. They have been tested repeatedly and kept in the homes of his friends and family for self-defense. But Mossberg’s Florida-based company, iGun Technology Corp., has never scaled the high-tech components to a handgun. And cultural and political barriers have stood in the way of selling the guns commercially.

Gun safety advocates have pushed for commercially available smart, personalized guns that could only be fired by a specific person through radio frequency chips, fingerprint scans or other technology, for more than three decades. They argue that the technology could make guns safer by reducing accidental shootings and suicides, and by rendering stolen guns inoperable by crooks — if they were widely available and became more commonplace.

Now, there are signs that a commercial market for smart guns maybe has arrived. The federal government is quietly encouraging gunmakers to submit smart weapons for military-grade testing. New Jersey lawmakers are seeking to revise a law that has kept manufacturers and retailers from selling the guns for over a decade. And federal appeals court judges in the West are deciding whether states can require gunmakers to manufacture weapons with specific safety features.

“We’re getting so close,” said Stephen Teret, a longtime gun safety advocate and founder of the Center for Gun Policy and Research at Johns Hopkins University in Baltimore. “I can almost taste it now.”

Last month, the White House announced that it will work with state and local law enforcement agencies to draft baseline specifications for smart guns that could guide manufacturers in producing the weapons for police work. The Obama administration also plans to award grant money to law enforcement agencies to purchase smart guns once they’re available.

The federal government has tried since the mid-1990s to spur development of smart guns, though many of the projects it funded were abandoned because it was difficult to work the technology into handguns without compromising their function, according to an April report from the departments of Justice, Homeland Security and Defense.

The report notes that Mossberg’s shotgun was “possibly the first ever production-ready firearm equipped with user-authorization technology.”

Mossberg said he’s ready to put his technology into a handgun, but lacks the money needed to develop it. He estimates he will need $5 million to build 25 to 30 handguns for testing. Another $15 million could launch him into full production.

The iGun’s chip technology only works within centimeters and makes it impossible for anyone other than the person wearing the ring to fire it. It is more reliable than fingerprint identification, which has been tested by other gun manufactures, Mossberg said.

The biggest hurdles to bringing smart guns to market are political and cultural, Teret, the smart-gun advocate, said. Gun rights advocates worry their emergence will lead to government mandates dictating what kind of guns could be bought and sold, and politicians have been reluctant to counter the powerful firearms groups.

But Teret said that with federal interest in the technology, the guns could soon be available — and especially attractive to families who want to keep guns for self-defense, but have small children at home and want to ensure they will be safe from accidents.

Between 2010 and 2014, 527 children under 18 were unintentionally killed by a firearm, according to the latest data compiled by the Centers for Disease Control and Prevention. In 2014, 33,599 people were killed by guns. Most of those deaths were suicides.

But smart guns won’t be a quick lifesaver because traditional guns are so prevalent, said James Pasco Jr., executive director for the Fraternal Order of Police.

Although it is impossible to know how many guns exist, the National Opinion Research Center at the University of Chicago reports that in 2014, 31 percent of U.S. households reported having a firearm.

“It would be centuries at the rate we’re going before it had any material effect on crime or even on accidental shootings,” Pasco said.

Pasco’s group doesn’t oppose a move to smart guns, but argues that law enforcement agencies shouldn’t be forced to adopt them.

Mossberg, the gunmaker, said he doesn’t want his products to be mandated either, which is exactly what many say a 2002 New Jersey law does.

“I’m first an American, second a businessman,” Mossberg said. “And that’s just wrong. Nobody should be told what to buy.”

Under the law, three years following the retail sale of a smart gun anywhere in the U.S., all guns sold in New Jersey would have to be smart guns. Lawmakers in California tried to pass a similar law in 2014, but it failed.

But Teret, who worked on the New Jersey law, admits that the mandate may have discouraged gunmakers and dealers from bringing smart guns to market across the country because they did not want to trigger the New Jersey directive. So now, he and other supporters are trying to revise the law to allow stores to carry traditional guns as long as they carry at least one smart gun model.

Opponents of revising the law, such as the National Shooting Sports Foundation and other gun groups, say it will still be expensive for retailers to comply and won’t change criminal behavior.

Gun ownership groups aren’t trying to block the technology, but gun owners should not be limited to a specific kind of gun, said Scott Bach, director of the New Jersey Association of Rifle and Pistol Clubs.

“If you want this technology to develop, take the mandate out,” Bach, also a National Rifle Association board member, told a New Jersey Senate committee last fall. “Take government hands off the process and let the technology develop naturally. Let’s see if there’s a market.”

Federal officials say they are trying to spur innovation and create a market for smart guns, not mandate them. And the 9th Circuit Court of Appeals in San Francisco soon may decide whether states can mandate their sale.

The court is considering a challenge to a 2003 California statute that requires that gunmakers produce firearms that indicate when there is a bullet in the chamber and won’t discharge when a gun’s magazine is detached.

Will They Work for Police?

Some local law enforcement leaders, like the San Francisco police chief, say they will welcome the opportunity to test smart guns. But it’s unclear whether police officers will embrace the technology.

Pasco, for instance, questions whether smart guns will be practical for police officers who may need to fire with the hand not wearing the radio frequency device or potentially use a colleague’s gun in an emergency.

“What do you do if your partner is down and your partner’s gun is available, but yours isn’t? You pick the gun up and you can’t shoot it,” Pasco said.

Mossberg acknowledged his guns likely won’t take off with police departments. He and Teret say they think the guns will have success with people who work by themselves and carry guns in public, such as air marshals, security guards and some school teachers — and who don’t want their guns to get in the wrong hands.

“I would hate to see some crazy guy take the air marshal’s gun when you’re 35,000 feet in the air and have the gun be able to work for him,” Teret said.

Parents who want to keep guns at home might also be eager to buy smart guns. A survey conducted last year by Teret and his colleagues found that 59 percent of Americans would be willing to buy a childproof smart gun, if they were going to purchase a new handgun.

What doesn’t appear to be in dispute is that smart guns likely could save some lives. “It’s just like airbags in cars,” Teret said. “We knew they would save lives, but we couldn’t tell how many until they got into the cars.”