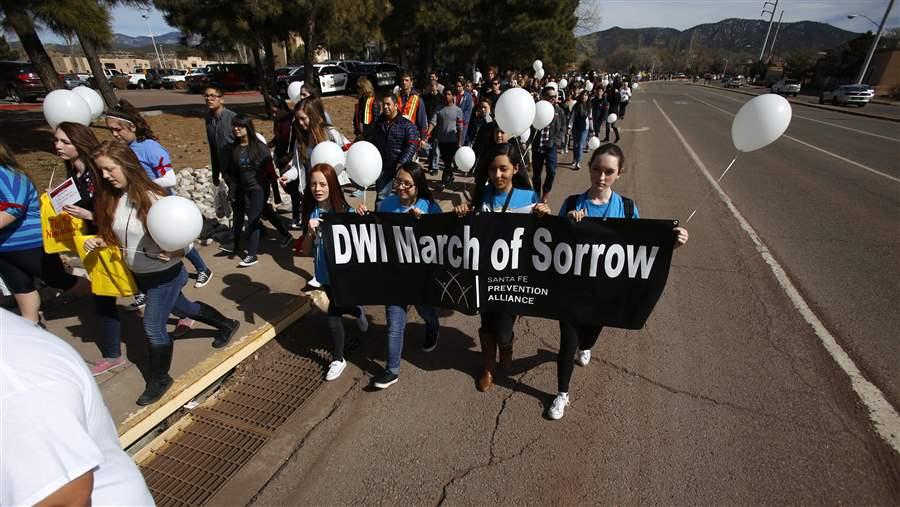 Middle school students in Santa Fe, N.M., march to honor DWI death victims. States like New Mexico, where alcohol-related deaths are above the national norm, have been mining data to raise awareness of preventable deaths.

Drinking is more likely to be the cause of death in much of the Southwest than in other parts of the country. In parts of Appalachia and New England, it’s a drug overdose. Suicide by gun stands out as disproportionately lethal in parts of the Upper Midwest and Alaska.

Although the top causes of death are similar for most states, many states have their own peculiar hard cases —types of deaths whose rates are higher than the national norm, a Stateline analysis of 2014 data from the Centers for Disease Control and Prevention shows.

The analysis, which relies on a method similar to one used in a CDC journal, shows some understandable disparities in the causes of death in some regions. The South, the epicenter of the nation’s obesity epidemic, has high rates of heart-related deaths. New Mexico and Arizona, where American Indian reservations have struggled with alcohol for decades, have high rates of alcohol-related deaths.

Some are more puzzling. Why, for instance, are falls disproportionately killing people in Northern states such as Iowa, Minnesota and Wisconsin? Why is Alzheimer’s disease causing relatively more deaths in Washington state?

State and local health officials increasingly plumb such disparities for clues that may help them develop preventive programs and save lives.

For instance, Kentucky and New Hampshire have high rates of death by accidental poisoning, which includes drug overdose. In response, Kentucky has begun a program to monitor the prescribing of addictive painkillers. It has also expanded the availability of treatment for substance abuse.

New Hampshire Gov. Maggie Hassan, a Democrat, signed a bill in January calling for stiffer penalties for drug dealers and more tracking of prescription drugs, calling the epidemic of heroin and prescription painkillers “the most pressing public health and public safety issue facing our state.”

Sometimes states can only do so much about higher incidents of mortality. Take suicide, for example. Guns often are more available in some Western states, said Catherine Barber, who directs the Means Matter Campaign at Harvard University. Their prevalence can drive up suicide rates, she said, not because gun owners are more likely to be suicidal — but because guns are more lethal if a person decides to commit suicide.

After noticing a stubbornly high rate of liver disease, intoxicated-driving and other causes of alcohol-related deaths, New Mexico’s Health Department this year began an alcohol-awareness program that focuses on areas of the state where the problem is most acute.

“The rate was not improving over time,” said Rosa Isabel Lopez, health data dissemination coordinator for the state health agency. “The decision was made to create more data points for community audiences and get this information into the hands of our neighborhoods.”

The state also launched a public website last year that displays data on health issues in small areas of the state, which communities can use to understand problems and target them.

Local detail, plenty of data, and plain language for policymakers are important aspects of successful state efforts to prevent deaths, said Ross Brownson, an epidemiologist at Washington University in St. Louis who wrote a 2010 guide on the subject.

“We like to say, ‘What gets measured gets solved,’ ” Brownson said. Until recently, he said, communities often didn’t have enough details about health problems to make policy decisions.

In the last few years, he said, there’s been improvement nationally in collecting and distributing health data. The University of Wisconsin’s Population Health Institute, for instance, introduced county health rankings for Wisconsin in 2003, and then expanded them nationwide in 2010.

The rankings noted drug overdose deaths “reaching epidemic proportions” in some areas such as northern Appalachia, and rising 79 percent nationwide since 2002. The Stateline analysis also found high rates of accidental poisoning, which includes drug overdoses, in Massachusetts and New Hampshire. 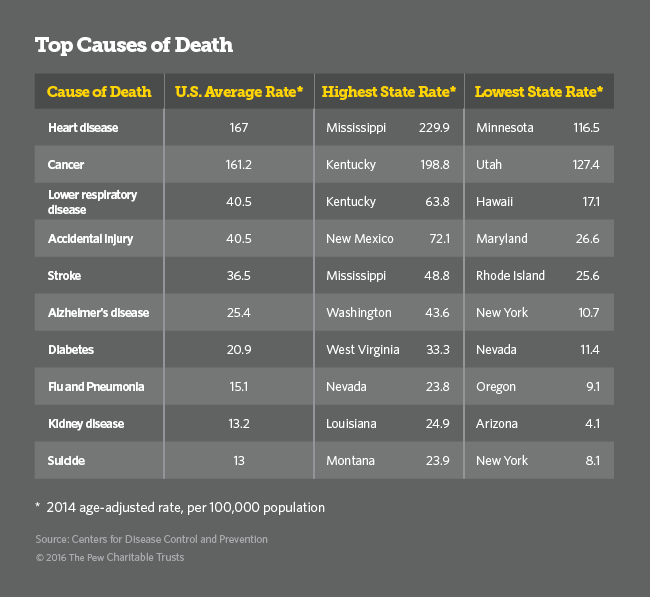 In Wisconsin and nearby Iowa and Minnesota, there are disproportionate instances of accidental falls that are fatal. It’s a phenomenon that has puzzled researchers for years, said Patrick Remington, an associate dean at the School of Medicine and Public Health at the University of Wisconsin.

“We’ve supposed that it’s due to cloudy weather, no sun and so no vitamin D [which promotes bone health], but there’s not been a good answer yet,” Remington said. Wisconsin’s Health Department has a fall prevention program, which points out that the elderly are particularly susceptible to falling.

Elizabeth Stein, a preventive medicine resident at the University of Wisconsin medical school, said low vitamin D levels can lead to both fatal falls and dementia in older people, though studies have yet to confirm a link between those causes of death and the area’s cloudy weather.

Washington state prepared a plan to address Alzheimer’s disease last year after data indicated it was the state’s third leading cause of death, killing people at a rate two-thirds higher than the national average. Worse, Alzheimer’s was on the rise while other top killers like cancer and heart disease were in decline.

But the apparent rise could be attributed to better data. Washington has a more rigorous method of collecting and verifying death data than some other states. States’ totals for all deaths from dementia, which includes Alzheimer’s, suggests that many might not be reporting the disease as carefully as Washington.

Differences between the states in recognizing and coding the cause of death can muddy the picture, said Francis Boscoe, a research scientist at the New York State Cancer Registry who used differing death rates by state as a “conversation starter” about state-specific mortality issues.

“It seems entirely plausible that physicians or coroners in Washington could be coding as Alzheimer’s what other states might call pneumonia or something else,” Boscoe said. “There are explicit rules for all this, but that does not mean they are all being followed the same way.”

After Boscoe wrote last year about peculiar death patterns in states, he said he heard plenty of feedback about data-collection issues that can make for misleading numbers.

As Stateline has reported, how the cause of death is recorded on death certificates, from which officials draw data, can vary widely even within a state.

In Kansas, for instance, what appeared to be the most distinctive cause of death — hardening of the arteries, or atherosclerosis, killing people there at seven times the national rate — was actually more of a data-recording problem than a medical one.

“This is a classification issue,” said Cassie Sparks, of the Kansas Department of Health and Environment. She said the state plans to emphasize better reporting and classification in training materials for medical examiners and others who sign death certificates.

But even if some data is flawed, cities and states can get life-saving or life-extending results by taking action on the evidence of health problems that do emerge. Brownson of Washington University in St. Louis points to New York City as an example.

The life expectancy in the city grew faster than the national average, paced by drops in heart disease, cancer and HIV from 2001 to 2010, a study published in the current Journal of Public Health Management & Practice found.

New York has focused in recent years on using health trends to guide new, albeit sometimes controversial, public policy — from restrictions on trans fats and tobacco to unsuccessful bans on oversized portions of sweetened drinks.

“The city health department is really a prime example of evidence-based policy, of making the policy dependent on the data,” Brownson said.