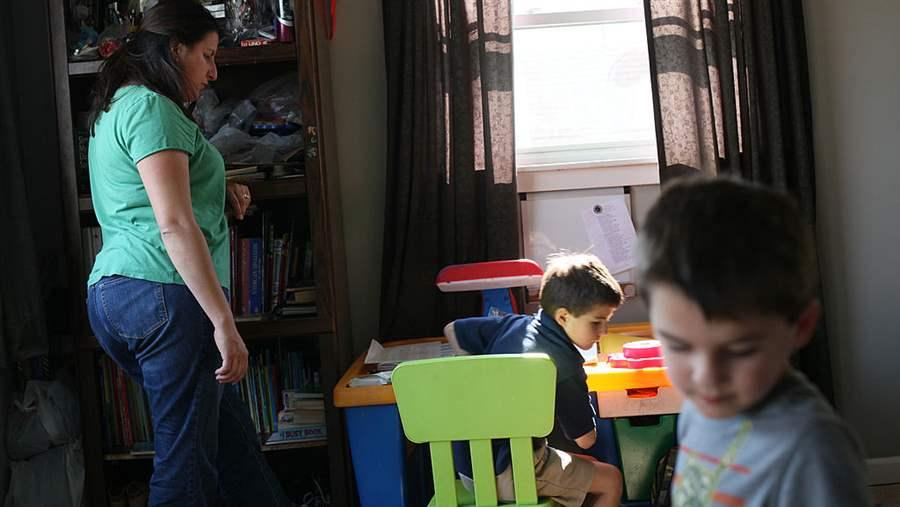 Michelle Suppers at home in Manassas, Va., with her sons, one of whom has attention deficit hyperactivity disorder. States are encouraging parents and doctors to try behavioral therapy for young kids with ADHD.

Federal health officials recommend that preschoolers with attention deficit hyperactivity disorder receive psychological counseling before they are put on medication. But states striving to promote the use of behavioral therapy have been hamstrung by a shortage of mental health providers.

They also have struggled to convince providers who are used to prescribing drugs first to shift strategies — especially in the face of what some state health officials and ADHD advocates describe as aggressive marketing by the pharmaceutical industry.

The Centers for Disease Control and Prevention released statistics this month suggesting that many states have a long way to go when it comes to promoting greater use of the therapy, which largely relies on teaching parents to reinforce positive behavior while avoiding confrontations.

In contrast, more than three-fourths of all preschoolers with ADHD were on medication, generally stimulants such as Adderall and Ritalin.

Behavioral therapy “may require more time, energy and resources than medicine but its effect can be more long-lasting,” CDC Deputy Director Anne Schuchat said when her agency released the numbers. “We are missing opportunities for young children with ADHD to receive behavioral therapy.”

Some state officials said they are hopeful the CDC’s focus on the issue will promote progress. “To have the CDC shine a spotlight on this … creates the momentum that states need in order to transform practices and prescribing,” said Mary Mayhew, commissioner of the Maine Department of Health and Human Services.

Children with ADHD have more trouble paying attention and are more impulsive than other kids. The consequences of the disorder can be life-altering. Children with ADHD are more likely to struggle academically and to drop out of school, and one-third of them continue to be affected as adults. One study cited by the CDC estimates that the health care and educational costs of kids with ADHD totals between $38 billion and $72 billion a year.

The number of children diagnosed with ADHD is rising. As of 2012, the most recent year for which numbers are available, 6.4 million children in the U.S. were diagnosed, up 42 percent from 2003.

Studies suggest that behavioral therapy is more effective than medicine for younger kids. Furthermore, the CDC notes that the long-term impact of ADHD drugs on young children is unknown, and the medications can cause side effects such as poor appetite, stomach aches, irritability, sleep problems and slowed growth.

For older children, however, AAP recommends both therapy and medication.

According to the CDC survey, which is based on tens of thousands of claims filed, the percentages of children with ADHD who receive behavioral therapy vary greatly from state to state.

Among Medicaid beneficiaries, the percentages ranged from 74 percent in Maryland to lows of 32 percent in Florida and 29 percent in New York. Overall, 54 percent of young children with ADHD in Medicaid received therapy in 2011, according to the CDC.

Among children with private insurance, Wisconsin had the highest percentage of children receiving behavioral therapy in 2014, at more than 61 percent, while Mississippi was lowest, at 23 percent. The overall rate for children in employer-sponsored plans in 2014 was 42 percent, compared to 45 percent in 2011, the year the AAP published its guidelines.

In the last several years, some states have taken steps to expand the use of behavioral therapy by increasing the number of counselors who can provide it.

In Pennsylvania, the effort grew out of a larger campaign to reduce juvenile delinquency in the state. Since 2010, the Pennsylvania Commission on Crime and Delinquency has handed out nearly $5 million in grants to mental health clinics around the state to provide training in the kinds of behavioral therapy recommended for young children with ADHD.

“If we can address a child’s ADHD symptoms early, they are less likely to have school failure, which we know can have an effect on delinquency,” said Lee Ann Cook of Penn State’s Evidence-based Prevention and Intervention Support Center, which works with the state crime and delinquency commission.

One challenge in Pennsylvania is that its Medicaid program will not pay for therapy sessions that involve the parents of the child with ADHD, Cook said.

All Medicaid beneficiaries in Louisiana are covered under managed care plans (in which providers receive a lump sum for a patient’s total care, rather than being paid for each service). The state is asking those plans to connect pediatricians and primary care doctors to behavioral health specialists who can diagnose and treat ADHD. The state also has enlisted Louisiana State University and Tulane University to train therapists in every part of the state in ADHD therapy.

In Louisiana and many other states, pediatricians often turn to medication because they have no alternatives to offer. “Doctors don’t know who to refer these kids to and stimulants are all they can offer in a 10-minute window,” said James Hussey, interim assistant secretary in the Office of Behavioral Health in the Louisiana Department of Health & Hospitals.

In New York state, two in three counties (capturing 16 percent of the population) have been determined by the federal and state governments as having a shortage of mental health providers. The relatively low percentage of New York children who receive behavioral therapy likely is related to that shortage, said Hal Meyer, founder of the New York chapter of the national ADHD advocacy organization Children and Adults with Attention-Deficit/Hyperactivity Disorder. Rather than waiting months for appointments for therapies, Meyer said, parents are eager for the immediate help that medicines promise.

Because of the way Medicaid services are delivered and financed in New York, however, the CDC data probably did not capture all of the behavioral therapy in the state’s Medicaid program, according to an official from the state Office of Mental Health. The state has also taken steps, including the development and expansion of programs that link pediatricians with mental health professionals, to increase the amount of behavioral therapy for young children with ADHD, the official said.

At the other end of the spectrum, state officials say Maryland’s success in expanding access to behavioral therapy is the result of an aggressive approach by the state’s health and education departments, which began in the early 2000s when the state created a steering committee on better diagnosing and treating young children with mental illnesses. Since 2008, the state has provided training for mental health providers in ADHD behavioral therapy and made efforts to educate pediatricians about diagnosing and treating ADHD.

Other states are focusing on discouraging doctors from prescribing ADHD drugs to Medicaid patients.

The Medicaid programs in 16 states (Arizona, Arkansas, Florida, Idaho, Illinois, Maine, Massachusetts, Mississippi, Missouri, Nevada, New Hampshire, New York, Oregon, Utah, Virginia and West Virginia) won’t cover ADHD medication prescriptions unless the prescriber explains the need for medicine in the particular case. Louisiana and Nevada require doctors to confirm that they have rejected other treatable causes for the patient’s symptoms before prescribing ADHD drugs. And seven states (Arizona, Florida, Illinois, Louisiana, Massachusetts, Virginia and West Virginia) require physicians to confirm that they have considered treatment other than medicine, such as behavioral therapy, before Medicaid will cover ADHD drugs.

In recent years, most private insurers have also required doctors to receive permission from health plans before prescribing ADHD drugs for children.

One challenge in reducing the use of medication is that many parents of children with ADHD are desperate for the immediate help the drugs may provide. Behavioral therapy takes longer — and requires hard work on the part of parents.

“By the time a parent comes to meet with me, they are tired and worried about their child. They are concerned their child might jump down a flight of stairs, that the child could get lost in a grocery store, or that the child could be kicked out of preschool,” said Georgina Peacock, director of the CDC’s division of human development and disability.

CDC’s Schuchat acknowledged that behavioral therapy “just might not work for some parents. We think it's a good investment of time, but we know that it may not be practical for every situation.”