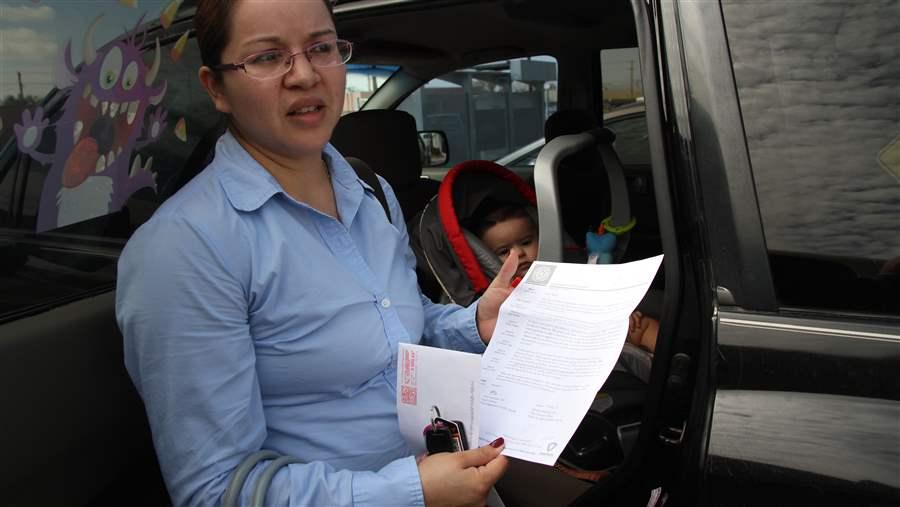 A woman shows a letter she received from health authorities saying her son was exposed to tuberculosis in a hospital in El Paso, Texas. State and local health departments are the front line of defense against a disease that may be on the upswing.

A year ago, Laura Hall felt tired all the time, was losing weight and had a bad cough.

The 41-year-old Spanish teacher from Shelburne, Vermont, went to doctors for three months before they finally nailed the diagnosis: active tuberculosis.

“I was scared. I was horrified. Oh my gosh, how did I get this? Where did I get it?” Hall said in a video about TB survivors’ experiences. “I didn’t think that I could get TB, ever.”

While Hall underwent treatment — isolation at home and a demanding regimen of antibiotics and other drugs — the Vermont Department of Health tested about 500 students and co-workers who might have been exposed to her. Nineteen children and two adults tested positive for latent TB. (People with latent TB aren’t sick or contagious, but they carry a greater lifetime risk of developing active TB.)

Hall’s was one of seven active cases in Vermont last year, up from two the year before. Twenty-nine states and the District of Columbia also reported more active TB cases last year than in 2014, the Centers for Disease Control and Prevention reported in March.

After two decades of steady decline, the number of active tuberculosis cases in the U.S. inched up last year. Hall’s was one of 9,563 TB cases reported last year, up from 9,406 cases the year before. The CDC is still trying to determine the reason for the uptick.

The goal set by the CDC, in 1989, of eliminating TB by 2010 — defined as less than one case in a million people — remains elusive. Even if the trend of declining cases had continued, the United States would not have eliminated TB by the end of this century, the CDC said.

“We are not yet certain why TB incidence has leveled off, but we do know it indicates the need for a new, expanded approach to TB elimination,” said Dr. Philip LoBue, director of the CDC’s Division of Tuberculosis Elimination, in an email.

A dual approach is needed: continue to find and treat cases of disease and evaluate their contacts as well as identify and evaluate other high-risk persons for latent TB infection, he said.

In Vermont, health officials aren’t sure whether last year’s increase was just a statistical anomaly or the beginning of a trend. In case it is the latter, the state Health Department is considering contracting with an outside firm to help it test contacts for exposure. Last year, the shorthanded department brought in health staff from around the state as well as volunteers from the Vermont Medical Reserve Corps to test contacts for exposure.

“We were lucky it wasn’t worse,” said Laura Ann Nicolai, deputy state epidemiologist and head of the tuberculosis control program.

TB is an airborne infectious disease caused by bacteria that spreads through the air, person to person, when someone coughs or sneezes. One in three people worldwide have latent TB, according to the World Health Organization. In the United States, up to 13 million people have been exposed to TB and could develop the disease.

Every year, tuberculosis claims 1.5 million lives worldwide and 500 to 600 in this country.

In the United States, Asians have the most cases and the highest rate of disease — 17.9 out of 100,000 persons. The top five countries of origin for foreign-born TB patients are Mexico, the Philippines, Vietnam, India and China.

Because TB hits some ethnic and racial groups harder than others, TB patients can face discrimination and social isolation. Public health officials worry about finding ways to target high-risk populations with TB education and treatment without stigmatizing those groups.

“Given the stigmatization of TB, our ability to do targeted interactions is limited,” said Dr. Jeffrey Starke, a pediatric tuberculosis physician at Texas Children’s Hospital in Houston. Starke is a member of the federal Advisory Council for the Elimination of Tuberculosis, which makes policy recommendations. “We’ve got to find a nonpejorative way to do it so others don’t perceive discrimination,” he said.

Going in the Wrong Direction

State and local health departments are the front line of defense for a disease that many think has already been eradicated. In the late 1800s and early 1900s, TB was a leading cause of death in this country and Europe. With no cure for the disease, patients were urged to “go west.”

More people flocked to Colorado as TB patients looking for dry air and sun than stormed the state as prospectors during the gold rush. Among them: Doc Holliday, friends with gunslinger Wyatt Earp and a participant in the shootout at the O.K. Corral.

“Colorado historically has been on the forefront of TB work,” said Dr. Robert Belknap, director of the Denver Metro TB program. “At the turn of the century, one-third of the state was here because of TB — seeking care for themselves or family members,” he said.

Today four states — California, New York, Texas and Florida — have more than half the nation’s active TB cases, though they have only a third of the country’s population. The four states have the highest numbers of foreign-born residents. The number of cases in Texas rose 5 percent to 1,334 last year.

He pointed out that TB is “a social disease with medical implications” because living conditions put someone at risk. TB is associated with poverty, overcrowding and being born outside the United States.

California, with 2,137 cases in 2015, has more than one in five of the new U.S. cases each year and a TB rate nearly twice the national average. Its TB prevention and control program is the nation’s largest — a $17.2 million annual budget split roughly in half between federal and state general funds, and a 40-person central office staff that works with TB contacts in the state’s 61 local health jurisdictions.

About 2.5 million people are infected with TB in California, but most don’t know it, said Dr. Jennifer Flood, chief of California’s TB control program.

While California has several programs aimed at latent TB, she said, “Smaller states are often challenged to test and treat latent TB” because they lack the resources.

Treating TB patients is labor intensive. To ensure that TB patients complete the course of drugs that lasts six months or longer, Directly Observed Therapy programs require a health care worker — not a family member — to watch patients with active TB swallow every dose. If a patient cannot get to a clinic, a health care worker goes to the person’s home. The worker monitors patients for side effects and other problems.

Care also involves communication and cultural challenges. In Michigan, where the number of active TB cases rose from 105 in 2014 to 130 last year, the health department reaches out to Detroit’s large Arab and Bangladeshi populations. In other parts of the state, Burmese immigrants have different needs, said Peter Davidson, Michigan TB control manager.

“Some local health departments have strong partnerships with translation services. Some rely on a less formal mechanism — a private physician or someone on staff at the hospital who speaks the language,” Davidson said.

The cost of treating an active TB case that is susceptible or responsive to drugs averages $17,000, according to the CDC. Care of patients with drug-resistant TB, which can result from taking antibiotics prescribed before TB was properly diagnosed, costs many times more: $134,000 for a multidrug-resistant patient and $430,000 for an extensively drug-resistant one.

Advocates say TB suffers from a lack of urgency and funding.

“TB isn’t as exciting a topic because it’s been around so long. It doesn’t get as much attention as Ebola and Zika, and its advocates aren’t as active as those for HIV/AIDS,” said Belknap. “We’re jealous.”

The federal Tuberculosis Elimination Act, the chief federal funding for TB programs, is authorized at $243 million a year but has received an appropriation of far less for the last several years — $142 million this year, for example.

Most of the money goes to the 50 states, the District of Columbia, 10 major cities and eight territories in grants under a formula based on the number of cases, their severity and other factors. The grants are used to pay salaries for nurses, doctors and epidemiologists, as well as for education and outreach services. Treatment costs are paid by insurance, Medicaid and state and local governments.

Funding at the authorized level could support research on a vaccine and better drugs and treatment of more cases of latent TB, advocates say. For now, no TB vaccine is approved for use in the United States. The medicines that cure TB and brought down the disease rate were developed in the mid-20th century. They require months of treatment and can have serious side effects, including hearing loss. A promising new drug may be able to prevent TB with only 12 doses over three months.

“The tools we have are inadequate,” Belknap said. “It’s a federal and a global problem.”

A Story of Success

In many ways, though, the story of TB prevention and treatment in the United States is one of success.

“We often say we’re our own worst enemy,” said Donna Wegener, executive director of the National TB Controllers Association. “We had such success in reducing TB after the resurgence in the 1990s that people think we don’t need additional dollars.”

Patients with diabetes, cancer and especially HIV infection are more likely to contract active TB because their immune systems are less able to fight off TB germs. During the HIV/AIDs epidemic, from the mid-1980s to the early 1990s, the number of TB cases jumped by 19 percent. From 1992 to 2014, the number of cases dropped 65 percent.

Among those infected in the early 1990s was a young physician who volunteered to treat TB patients at a clinic in New York City. He tested positive for exposure but his latent TB did not progress to active disease. Tom Frieden now is director of the CDC, leading the fight against TB.