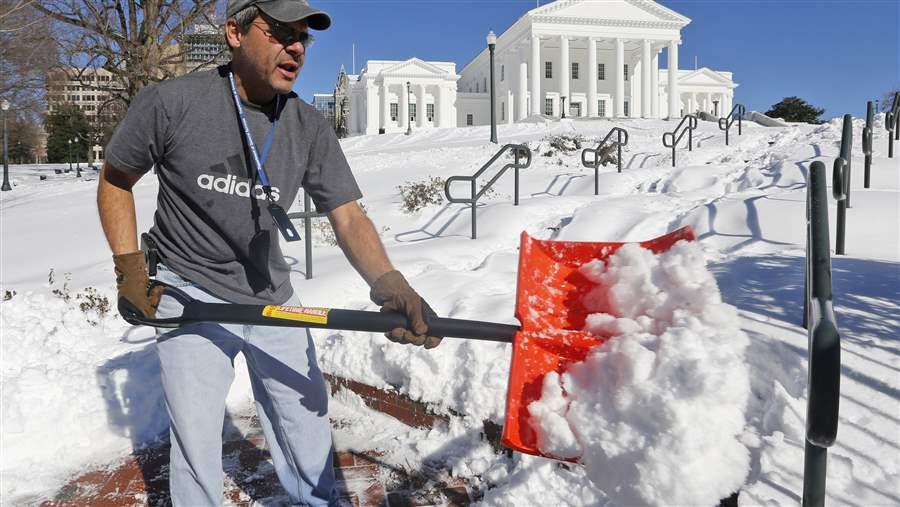 Joe Damico, deputy director of the Virginia Department of General Services, shovels a walkway to the State Capitol this winter. Faced with a wave of retirement, states are looking for ways to keep experienced employees until they can shore up their talent reserves.

California has a problem: Fifty-two percent of its managers in the state workforce could decide in the next five years that they’re tired of working, grab their retirement packages and go. Their departure would create a serious brain drain for the state, which has the largest number of state employees in the country — 220,000.

So Jeff Douglas, California’s chief of workforce development, is trying different tactics to keep senior workers on the job: offering a flexible work schedule, promoting work-life balance and creating the first government-wide employee management survey to assess the needs of workers. The idea is to find out who is leaving — and why.

Douglas knows that efforts to keep senior workers — especially managers, specialists, and highly educated and knowledgeable employees — on the job are at best stopgap measures. Eventually, the state will have to shore up its talent reserves as baby boomers age out of the state workforce. “Because people can walk right now, we have to be ready if they do,” he said.

Like California, nearly every state and locality faces the imminent departure of retirement-eligible employees. Anywhere from 30 to 40 percent of state workers are eligible for retirement, said Leslie Scott, executive director of the National Association of State Personnel Executives (NASPE). And states are scrambling to find ways to retain their most valuable seasoned employees.

Finding replacements won’t be easy. State employees are more educated than the rest of the nation’s workforce, including federal and local government employees, according to the Congressional Research Service.

So state personnel executives are experimenting with a variety of approaches to hang on to experience, including job-sharing and telecommuting, delayed retirement programs that pay lump sums to would-be retirees to keep working, training and development, and reward and recognition programs. They also are stepping up recruiting efforts to attract older employees who work in the private sector.

The idea, Douglas said, is to create a work environment “where you can stay longer and work longer.”

In Tennessee, where 32 percent of the state workforce is eligible for retirement, state workers can take advantage of the “temporary employment option.” The program allows retirees to work for up to 120 days during a 12-month period. This way, the state can “recruit” high-performing retirees to assist with special projects, said Rebecca Hunter, the state’s commissioner of human resources.

“This allows an agency to benefit from the transfer of institutional knowledge and is a nice transition to full retirement for the employee,” Hunter said.

In Ohio, state workers in the Office of Opportunities for Ohioans with Disabilities are allowed to schedule their work hours as they see fit, as long as they work somewhere between 6 a.m. and 6 p.m.

In Colorado, where 20 percent of the workforce in the state’s information technology division is eligible for retirement, the agency encourages retirement-age professionals to work with younger workers to ensure that knowledge is passed down to the next generation.

This is particularly important when it comes to dealing with older, “legacy” technology and other specialized fields, said Karen Wilcox, director of human resources in the Colorado governor’s information technology office. “Knowledge loss is the most critical issue,” Wilcox said.

In Virginia, where a quarter of state employees will be eligible to retire in the next five years, state human resources executives use “intense data” to predict who will be retiring and what is pushing them out, said Sara Redding Wilson, Virginia’s director of human resources.

“Only a small fraction is going, and we know why,” Redding Wilson said. Armed with data, she said, the state can tailor its retention efforts — while finding ways to recruit the next wave of talent.

The areas with the highest turnover rates are in corrections, juvenile justice and behavioral health, Redding Wilson said, fields with less flexibility in scheduling and that don’t pay as much.

Some states, such as Alabama and Arizona, and some localities, such as Los Angeles, Pinellas County, Florida, and St. Louis, let potential retirees take advantage of the Deferred Retirement Option Program (DROP). It works this way: public workers — such as police officers — who reach retirement age commit to continuing to work for a fixed period. They go on collecting their regular paycheck. And when they retire, they are paid a lump sum bonus of as much as 90 percent of the salaries they earned while continuing to work.

DROP programs can be an attractive incentive to keep talented employees on the job longer, while reducing costs for recruiting and training new employees, said Angela Curl, assistant professor of family studies and social work at Miami University in Oxford, Ohio.

But not all states have kept them going. In 2001, Missouri implemented a similar program, called BackDROP, which offered state workers more flexibility in the start and stop dates. (Roughly a quarter of Missouri’s state employees are eligible to retire this year.)

In a 2014 report, Missouri state employees said that the BackDROP program had been an incentive for them to stay on the job. Some used the money to pay off debt, while others put in savings for their children to inherit, something that they cannot do with traditional pension plans, Curl said.

But in 2010, legislators amended the program. Employees hired after Dec. 31, 2010, aren’t eligible to participate in the program.

Aging Out Will Continue

And states and local governments have already seen their workforces shrink in the past decade, thanks to budget cuts enacted during the Great Recession, according to the Center for State and Local Government Excellence.

State agencies also cut back on training and development programs, NASPE’s Scott said. As a result, younger employees aren’t prepared to step in to key management positions, she said. Meanwhile, many state workers — those who weren’t laid off in the midst of cutbacks — postponed retirement.

Some still are, which can give states some breathing room in which to plan to replace them. In Virginia, for instance, Redding Wilson said some younger boomers in their 50s are staying on the job to keep the state’s health care coverage.

But that won’t last long. As the economy continues to improve, more state workers are expected to retire, Scott said. And the remaining talent pool for top managers is much smaller. During the recession, many layoffs happened at the middle-manager level, she said.

The retirement wave will hit all sectors of government, from teachers to nurses to law enforcement. But finance, engineering and management, along with information technology, are areas that could see the biggest losses, according to Elizabeth Kellar, the center’s CEO. There are also big challenges to recruiting and retaining nurses, epidemiologists and doctors for public health jobs, she said.

“It’s a huge issue,” Kellar said. To maintain a strong workforce, she said, states need to focus on recruiting and retaining good people, develop talent through training, offer competitive compensation and have a succession plan for passing on duties to younger workers.

At the same time, states must adjust to the characteristics of a new generation of workers, who are more likely to hop from job to job, and between the private and public sectors.

“If they’re coming in [to work for the states], they’re not staying,” Scott said.

Planning for the Future

In Maine, where roughly a quarter of the state’s IT workforce is eligible for retirement in the next two years, “about 3,000 years of experience is going to be walking out the door,” said Jim Smith, Maine’s chief information officer.

“It’s going to be transformational. We’re going to need to do something radical to address this change.”

For the past couple of years, his agency has been focusing on how to keep seasoned employees on the job while attracting new talent. His agency allows retirement-age employees to work part-time. But, he said, “That’s a short-term solution.”

To attract millennials, his agency drastically streamlined its hiring process. Now, applicants can apply for jobs using a mobile app. Applications have increased 35 percent since the app launched, Smith said.

The state also launched an intern-mentor program, partnering with local universities and community colleges to identify potential hires and pair them with veteran workers. Since the program started in 2013, 70 percent of the interns have become full-time employees, he said.

One example of this: Smith. In 2012, after more than 30 years working in the private financial services sector, he decided, rather than retiring, he’d go to work for his home state. “I wanted an opportunity to give back,” Smith said.