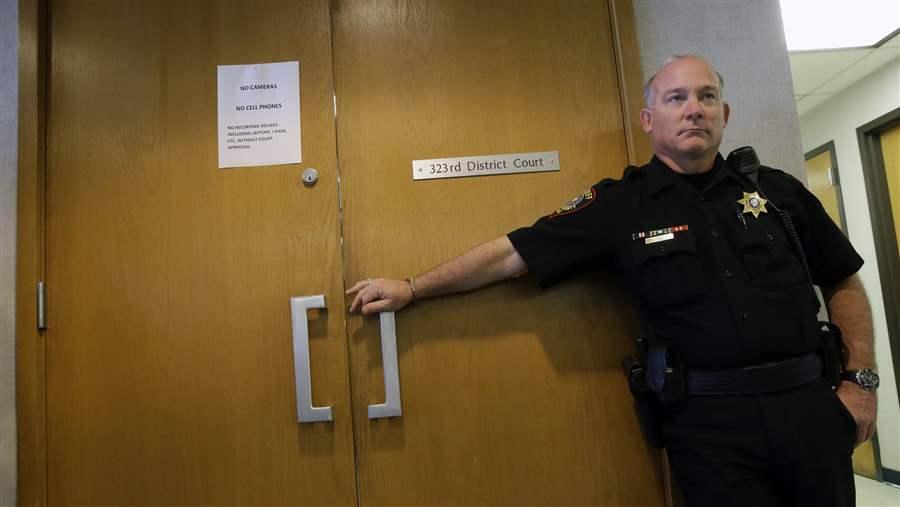 A guard stands outside a juvenile courtroom in Fort Worth, Texas. Juvenile court judges, lawyers and legal analysts increasingly say that juveniles should be represented by criminal defense lawyers who are specialists in juvenile law.

CAMBRIDGE, Mass. — At first glance, the rotunda of the Middlesex County Juvenile Court building doesn’t feel very different from where adults face criminal proceedings. It’s hushed. Lawyers scurry to meet with clients sitting next to family members. As the kids wait for their cases to be called, they stare straight ahead, somber looks on their faces.

Many of the young defendants here are represented by lawyers who specialize in juvenile cases and say the cases can be more complex, take more time and have greater long-term consequences for the defendants than adult cases. As that view becomes more widespread, courts and indigent defense offices across the country are placing more requirements on juvenile defense lawyers with the aim of making it a specialized practice.

Historically, juvenile court often has been seen as a training ground, a “kiddy court” without jury trials where new, young lawyers could learn the ins and outs of criminal defense before moving to the higher stakes of adult criminal court.

“That’s where they learn to be an attorney,” said Tim Curry with the National Juvenile Defender Center (NJDC), which developed training standards for juvenile defenders. “But that is not OK in other professions. We don’t tell brand-new doctors they should start as pediatricians. So why do we accept that with the justice system?”

There are other problems, too. Juvenile cases in many states often are handed over to panel attorneys, lawyers in private practice who are paid by the government to take overflow cases or cases that pose conflicts of interest. They may not have substantial experience or even an interest in juvenile defense. And that can have consequences for a youthful defendant’s case.

An independent review of cases in Los Angeles County found that juveniles represented by panel attorneys were more likely to be transferred to adult court to stand trial. In the past five years, 25 percent of such clients were transferred, compared to 15 percent of clients represented by public defenders. The private attorneys, paid a lump sum of about $350 to take a juvenile case, also completed such cases almost twice as quickly, but filed fewer motions and consulted experts less often.

The U.S. Department of Justice has stepped in several times in recent years to investigate troubled juvenile justice systems. In 2012, for instance, the department said black children did not fare as well as white children in Shelby County, Tennessee, and that children of all races were not being properly advised about their rights. The county has since created a new office to handle juvenile defense.

But the perception that juvenile cases can be tossed to any lawyer or used as a training ground for new ones is rapidly changing — a shift juvenile defenders attribute partly to research on the brain development of adolescents that shows cognitive abilities aren’t fully formed until people reach their 20s.

Most state bar associations require lawyers to take a certain number of hours of continuing legal education. But advocates and legal leaders in some states are pushing to require those who represent children to take juvenile-specific classes, which could include child and adolescent development, differences between delinquency law and adult criminal law, alternatives to incarceration, and how mental health issues and past trauma affect children.

But the 20 states with a statewide juvenile public defense system, such as Massachusetts, often have more power than associations or commissions to place requirements on the attorneys they hire and contract with.

Many juvenile justice advocates and defenders point to the Committee for Public Counsel Services (CPCS), the public defender agency in Massachusetts, as a leader in juvenile defense for the standards placed on lawyers, the training required of them and the approach taken with kids.

“We would love to replicate Massachusetts,” said George Yeannakis, a lawyer with TeamChild in Seattle who is also pushing to increase training hours in his state. “In Washington, no one can make you go to training.”

The process for certifying and training lawyers who work with juveniles in Massachusetts is one of the most strenuous in the country. The state is also unusual in that it requires lawyers to get experience in adult criminal court before they are permitted to work with kids. Since 2011, private attorneys must get at least a year of criminal defense practice and undergo eight hours of training before they can be appointed to represent juveniles. For public defenders to be hired as CPCS staff, the requirement is three years.

The state is not just trying to move away from the reputation of juvenile courts as a training ground, but to make juvenile law a specialty, said Joshua Dohan, director of CPCS’ Youth Advocacy Division.

Once lawyers get their bearings in adult court, Dohan said, they are ready to start learning about the complicating factors of dealing with juveniles — the differences in the law, the best ways to interview kids, and how to maintain attorney-client privilege and still include parents in the process.

In 2012, the state required all juvenile panel attorneys to renew their certification. The labor-intensive process requires lawyers to document that they have aggressively represented their clients by doing things like hiring expert witnesses and filing motions to suppress evidence. And it weeded people out. The number of private lawyers certified to take juvenile cases dropped from 3,000 to about 400.

Helen Fremont, who oversees the process, said many lawyers who took only a few juvenile cases a year, as well as those who simply did not enjoy working with kids, did not fill out the forms.

The state gave feedback to those who did complete the process, and some lawyers were granted a provisional one-year certification and told to make specific improvements. A letter to one lawyer who had been taking juvenile cases for 20 years outlined deficiencies in his practice: he was not calling witnesses, conducting evidentiary hearings, or making time to meet with clients.

Staff attorneys also have undergone intensive training. In 2011, CPCS required all staff to take a five-week training program on juvenile justice. The training covered legal matters such as how laws and court procedures are different in juvenile cases and how lawyers should prepare for trial. Lawyers also were encouraged to collaborate with social workers to get children access to other help they may need.

“The idea is that an effective juvenile defender would advocate not just in the courtroom, but in the community, in the school — if they need help getting an individualized education plan — help them get into an afterschool program, helping get health issues addressed,” Dohan said.

The training also covered adolescent development and brain science, and the different ways such research has been used during proceedings and in judges’ decisions. That research finds adolescents are more impulsive, less able to think through the long-term consequences of their actions, and more easily influenced by those around them— something the U.S. Supreme Court has recognized in multiple cases.

It’s not just that kids aren’t responsible for their decisions in the same way adults are, Dohan said, but that the experiences they have inside and outside of the justice system affect who they will become.

Kenneth King, a judge at the juvenile court in Cambridge, said the quality of representation has improved since the experience requirements were put into place. When he started representing juveniles as a lawyer in the 1980s, lawyers were more interested in getting deals for clients than in defending them. Now, lawyers are arguing more on behalf of their clients, filing motions and legal memoranda.

But he cautions that the Massachusetts model is a work in progress.

“If we’re the best, it’s a comment on the rest,” King said. “There’s still a percentage [of lawyers] that doesn’t mount a vigorous defense. But you change that by setting expectations of what is and isn’t acceptable behavior.”

Naoka Carey with Citizens for Juvenile Justice, a Massachusetts advocacy group pushing to improve juvenile justice, said the tougher standards may present an initial barrier to people interested in juvenile defense, but she doesn’t think it deters committed people.

“I’ve talked to people who want to do juvenile work straight out of law school, and there are some who are a little frustrated, but I don’t know anyone who’s let it discourage them entirely,” she said.

In Nevada, a state Supreme Court order says juvenile defenders should get four hours of juvenile-specific legal training a year. In Virginia, the Indigent Defense Commission requires lawyers to complete four hours of juvenile training before taking cases. And in Washington, caseload limits are designed to ensure that lawyers don’t have more cases than they can handle.

The problem, said Curry with the NJDC, is those standards are often unenforceable. In many cases, there is no one to review lawyers’ qualifications or verify that they’re following guidelines, such as meeting with clients within 48 hours of receiving a case. Sometimes lawyers simply sign a paper saying they’ve done the required training.

It can also be difficult to make sweeping changes in states with public defender programs that are run at the county level.

The new law in California imposed uniform standards on public defenders, whose systems are set up by counties. In addition to requiring eight hours of juvenile legal training a year, the law gave the state’s Judicial Council the power to determine who can take cases. Starting in July, only lawyers who have at least three years with 50 percent of their practice committed to juvenile work, or those who have completed 12 hours of juvenile-specific training may take the cases.

“Before this, there was no training required,” said Sue Burrell with the Pacific Juvenile Defender Center, which pushed for the law. “If the court is going to appoint someone to represent a child we want them to know something.”