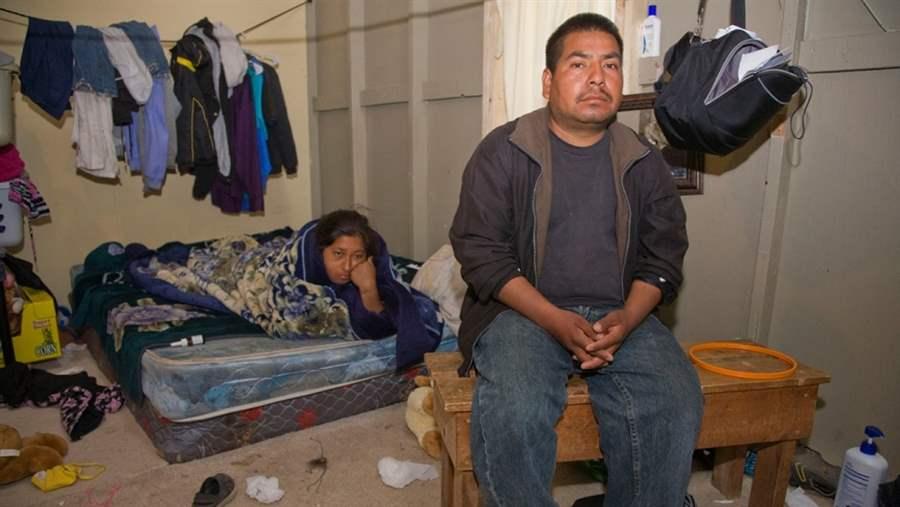 Farmworkers in migrant housing in Skagit County, Wash. Most farmworkers are dependent on temporary housing, and much of it is dilapidated and unsafe.

Every spring, a couple million migrant farmworkers, mostly immigrants, many undocumented, jump from farm to farm, state to state, to harvest the nation’s crops.

Given the transient nature of their work, most are dependent on scarce, often dilapidated, temporary housing. Some workers live in employer-owned housing that is licensed and state-regulated — though even this may be in disrepair. Many live in unlicensed, hazardous labor camps, which are often owned by farmers. Rental housing is in short supply in rural areas, making it easy for landlords to charge exorbitant rents. Some farmworkers sleep 10 to a trailer, bunk in barns or camp in the woods.

The unsanitary, crowded and poorly ventilated living conditions pose risks to workers’ health, increasing their vulnerability to everything from infectious diseases to heat strokes.

In a handful of states, efforts are underway to improve living conditions for these workers. Oregon offers tax credits to investors who build farmworker housing. In Oregon and Washington, nonprofits are building apartment complexes for farmworkers using a combination of state and local money, federal funds and private money.

For a decade, grape farmers in Napa Valley have levied taxes on themselves to pay for dormitory-style housing, meals, laundry facilities and literacy classes for some of the farmworkers who keep their $533 million industry cranking. Amid a worker shortage, Napa growers want to do what they can to attract the labor they need, said Jennifer Putnam, executive director of the Napa Valley Grapegrowers, a coalition of growers, vineyard owners and associated businesses.

“This is a way of insuring we don’t get into those labor crunches. But at the same time, it’s just a basic human responsibility,” Putnam said. “We hope other regions feel the same way. We’re ready to take this on the road. We have an opportunity to be a model. For agriculture to persist and survive, we need to be doing this in every region.”

Most migrant farmworkers are immigrants from Mexico and Central America. Some hail from Jamaica and Haiti, and one in four is U.S.-born. Most are men, their average age is 36. Forty-one percent of them are undocumented.

California, Texas, Washington, Florida, Oregon and North Carolina have the largest numbers of farmworkers, according to Student Action with Farmworkers, a Durham, North Carolina-based advocacy and research group.

The lack of safe and sanitary housing for migrant farmworkers has been a problem for decades. But recent investigations have shined a spotlight on the issue.

In March, Texas state lawmakers from areas near the border pushed for more aggressive enforcement of the state’s underfunded housing inspection program after journalists found that farmworkers were forced to live in unventilated shipping containers and relieve themselves in the brush. Migrant housing laws in Texas are fairly extensive, but the investigation found that state agencies had not fined a single farm owner for housing infractions since 2005.

Meanwhile, an April report by the Midwest Center for Investigative Reporting found that oversight of migrant housing in Illinois, Indiana, Iowa, Michigan, Missouri, Texas and Wisconsin was “fractured and ineffective.” State inspectors found mold, sewage, pest infestations and faulty electrical wiring in farmworker housing, but rarely followed up to ensure that conditions improved.

Farmworkers are often reluctant to speak up, particularly if they are undocumented, said Moises Loza, executive director for the Housing Assistance Council, a Washington, D.C.-based low-income housing development agency.

“When you work for a grower and he owns the housing, you better be careful,” said Loza, the son of migrant workers. “Not only could you lose your job, but you’ve lost your housing. That clearly adds to the fear factor.”

But lax enforcement is common, according to housing rights experts such as Ilene Jacobs, director of litigation for California Rural Legal Assistance Inc. Furthermore, federal agencies can have conflicting housing standards. For example, the Occupational Safety and Health Administration requires that housing in temporary labor camps maintain at least 100 square feet living space per person, while the U.S. Department of Housing and Urban Development (HUD) defines overcrowding as anything less than 165 square feet per person.

State agencies often don’t have the money to employ enough inspectors. Between 2009 and 2011, for example, the Michigan Department of Agriculture and Rural Development, which licenses employer-owned housing, only had funding for three and a half inspectors to cover the entire state, said Mark Swartz, deputy director of the agency’s Environmental Stewardship Division. The state issues licenses for housing for 22,000 workers and their families, a Sisyphean task for a skeleton crew, he said.

“We didn’t have adequate staff to follow up,” Swartz said. “We can’t see what we didn’t see.” Now, he said, his staff is up to seven inspectors, thanks to a recent bump in the agency’s budget.

(Farmers who hire guest workers on H2A visas are required by law to provide free housing and transportation, but these workers only account for 2 to 5 percent of all migrant workers. Their housing is usually better than that of other migrant workers, according to Virginia Ruiz of Farmworker Justice, a Washington, D.C.-based research and advocacy group.)

For farmworkers who don’t live in state-licensed and inspected facilities, things are even more precarious, Jacobs said. They live in unregistered labor camps or rely on the private housing market. Often, farm owners will operate unlicensed labor camps in order to evade state regulations and save money, she said.

But Helen Dietrich, whose family has owned Ridgeview Orchards in Conklin, Michigan, for six generations, says that she doesn’t know any farmers who operate unlicensed camps in her state. In Michigan, she said, when the state budget was cut for migrant camp inspections, growers got together and lobbied the Legislature to reinstate the budget. Now, she said, growers pay a license fee of $100 to $150 per camp each year to the state.

“We felt it was so important to say, ‘Our housing has been inspected, it’s licensed and it’s going to be safe for you to live in.’ In order to attract skilled workers, we have to provide the best housing that we can for them,” said Dietrich, whose farm provides housing to 120 to 150 migrant farmworkers and their families.

California started building migrant housing centers in the 1960s. Before then, farmworkers were forced to camp out by riverbeds, in cars, and in dwellings with no indoor plumbing, said Evan Gerberding with the California Department of Housing and Community Development.

Today, Gerberding’s agency operates 24 housing centers scattered around the state. The counties own the land, but the state owns the actual buildings. Families live in small, air-conditioned houses from April to October, and pay about $11 to $12.50 per day in rent. The centers also have laundry facilities, and many also offer day care; medical and dental care; and English classes.

But the migrant housing centers only serve families, which make up a small fraction of the state’s migrant workers. The majority of farmworkers — single men — aren’t eligible to live there. And as the farming industry has changed, the centers aren’t doing enough to keep up with the growing demand for housing, Jacobs said. For example, the industry increasingly operates nearly year-round, but the centers shut down for several months.

“I’m not criticizing the state for having the housing centers. It’s just not nearly enough,” Jacobs said.

In California, some farmworkers have been able to take advantage of HUD’s Self-help Homeownership Opportunity Program (SHOP), which allows low-income borrowers to build their own homes, greatly reducing the cost of their homes through sweat equity.

In 2014, the U.S. Department of Agriculture rolled out a $29 million loan and grant program to provide permanent housing for farmworkers. So far USDA has funneled the money to programs in California, Colorado, Florida, Mississippi, Oregon and Washington.

But the USDA money isn’t enough, according to Stanley Keasling of the Rural Community Assistance Corporation, a Sacramento-based organization that works with 13 Western states and Hawaii to build farmworker housing.

The most an individual project can get from the USDA is $3 million, but most farmworker housing projects cost $10 million to $20 million. Nonprofits in states with large farming populations like Oregon and Washington end up cobbling together a combination of federal funds, state grants and private funding to build new housing units. But they are often met with opposition from local communities that don’t want them there, Keasling said. Some cases have ended up in federal court.

“Growers recognize it’s an issue,” Keasling said. “They want to build housing so they have an adequate workforce to do their work.”