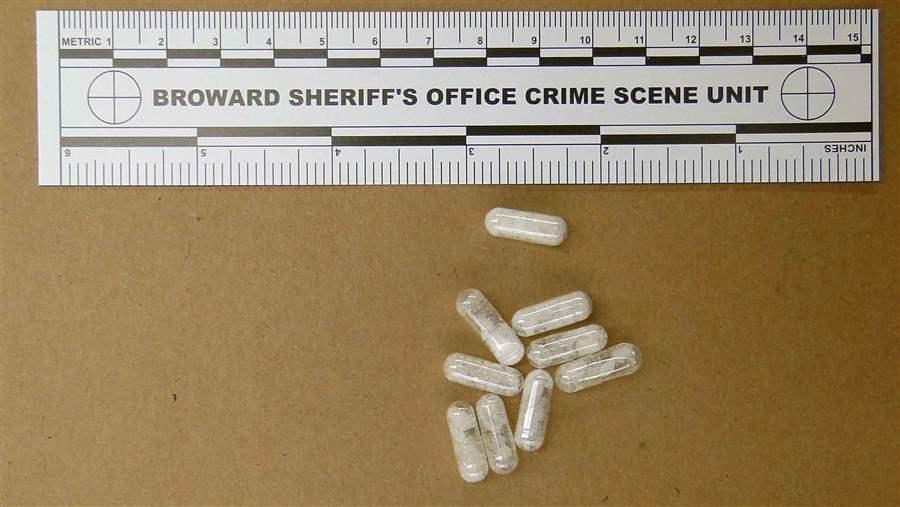 Vials of a confiscated synthetic amphetamine called flakka that killed 61 people in Broward County in a little more than a year. States have been reworking drug laws to make it easier to classify synthetic drugs as illegal.

It’s been four months since anyone in Broward County, Florida, has died from an overdose of alpha-PVP, known as flakka, a crystal-like synthetic drug meant to imitate cocaine or methamphetamine. But the drug has already taken a deadly toll, and left health and law enforcement officials scrambling to stem a new public health crisis.

In small doses, flakka elicits euphoria. But just a little too much sends body temperatures rocketing to 105 degrees, causing a sense of delirium that often leads users to strip down and flee from paranoid hallucinations as their innards, quite literally, melt. If someone survives an overdose, they are often left with kidney failure and a life of dialysis.

Flakka is among a growing number of addictive and dangerous synthetic drugs being produced easily and cheaply with man-made chemicals in clandestine labs in China. But because the drugs were largely unregulated when they first hit the market, some states have struggled to combat them. Now legislators, health professionals and police are trying to eradicate the drugs by making it easier to qualify them as illegal and ramping up the criminal penalties for selling them.

Since 2010, when synthetic drugs started becoming popular in the U.S., 32 states have passed laws to make it easier to classify synthetic drugs as illegal. This year, the District of Columbia and Florida passed similar measures, and in at least 10 other states, changes to controlled substance laws took effect, according to the National Alliance for Model State Drug Laws (NAMSDL).

Among the most popular synthetic drugs in the U.S. are synthetic cathinones, known commonly as bath salts, and synthetic cannabinoids, essentially smokable imitation marijuana products, which are sold in stores using kid-friendly branding like Scooby Snax.

It had been difficult for states to classify synthetic drugs as illegal, a process known as scheduling, because drugs are typically banned based on the compounds they contain. Under that system, manufacturers can change a molecule of an illegal synthetic drug, essentially rendering it legal.

“It does seem to some extent that everybody’s a step behind what’s being produced,” said Jonathan Woodruff, an attorney with NAMSDL.

While the federal Drug Enforcement Administration is working to permanently add 10 synthetic cathinones, including alpha-PVP, to its list of scheduled drugs, some states have also been moving to modify how they schedule drugs.

This year, Florida and the District of Columbia enacted laws that change the way they schedule synthetic drugs. Rather than making the drugs unlawful based on their chemical makeup, the new laws classify drugs based on the type of drug and the reaction it causes.

The approach means that any drug that mimics an already illicit substance will automatically be illegal. The change will enable Florida to quickly prosecute drug cases and stomp outbreaks of new drugs, said James Hall, an epidemiologist with Nova Southeastern University.

“It bans substances before they appear or before we even know about them,” Hall said. “So it breaks this vicious cycle of a new drug appearing, finally getting it scheduled or banned and then another one rushing in to takes its place.”

These laws alone won’t stop the spread of synthetic drugs. But public health advocates are hopeful the Florida law will help prevent another flakka, from which 61 people in Broward County died between September 2014 and mid-December 2015.

In the District of Columbia, where in September 603 people were taken to the hospital after ingesting synthetic cannabinoids, the new law, which went into effect this month, is also expected to make it easier for police and prosecutors to charge and convict drug dealers.

In DeKalb, Illinois, one of the first places to adopt a similar law in 2012, City Attorney Dean Frieders said flakka and other synthetic cathinones like bath salts haven’t taken hold there. (A statewide law in the same vein was passed in 2015.)

But the city of almost 44,000 people, which is home to Northern Illinois University, did face a growing problem with retail sales of synthetic marijuana products, which are said to elevate mood and relax the user but have also been known to cause extreme anxiety, paranoia and hallucinations, as well as rapid heart rate, vomiting and violent behavior.

The ordinance not only banned the synthetic substances, but allowed city officials to suspend or revoke the tobacco and liquor licenses of businesses that sold the drugs, which Frieders said was effective.

“A business just can’t relocate to a different corner,” he said.

States are also sanctioning businesses for the sale of synthetic drugs to cut down on sales and adverse health reactions, Woodruff said.

The District of Columbia has shut down four stores that sold the fake marijuana products, which has led to a substantial decline in people needing medical attention after injecting them, said Robert Marcus, communications director for the District attorney general. The number of people transported to hospitals in the city after consuming synthetic marijuana dropped to 110 in February, down 82 percent in five months.

Broward County officials say they expect the new scheduling of synthetic drugs to be helpful, but they relied on a different approach to largely eliminate flakka: working with the DEA to pressure the Chinese government, which last fall made it illegal to produce it and 115 other synthetic substances.

Heather Davidson, a prevention specialist for the United Way in Broward County, said officials in South Florida are at a “resting point” with flakka-related emergencies. But, she said, some dealers are passing off real methamphetamine and cocaine as the synthetic drug, even though those drugs are more expensive and have been around longer, because flakka has become so popular.

Broward’s flakka problem came to a head last year when county hospitals saw 360 cases related to the drug in one month. By December that number had dropped to 54, an 85 percent drop in five months.

“We still hear anecdotally that people are searching for flakka, that users are still wanting to find it,” Davidson said. “And I believe that another synthetic drug or synthetic compound will take its place.”

One of those compounds might be synthetic opioids, which are gaining popularity as it becomes more difficult to get prescription opioids like oxycodone and morphine in the wake of the nation’s painkiller- and heroin-addiction crisis. Those drugs, largely produced in Mexican labs, are made with fentanyl, a synthetic drug that is a hundred times more powerful than morphine and 50 times stronger than heroin. Davidson and others worry they will be behind the next epidemic.

“Heroin you need to cultivate. You need fields, you need workers, you need labor,” Davidson said. “With something like a synthetic drug, you just need a laboratory and chemical compound and a base and you’re able to create it very cheaply.”