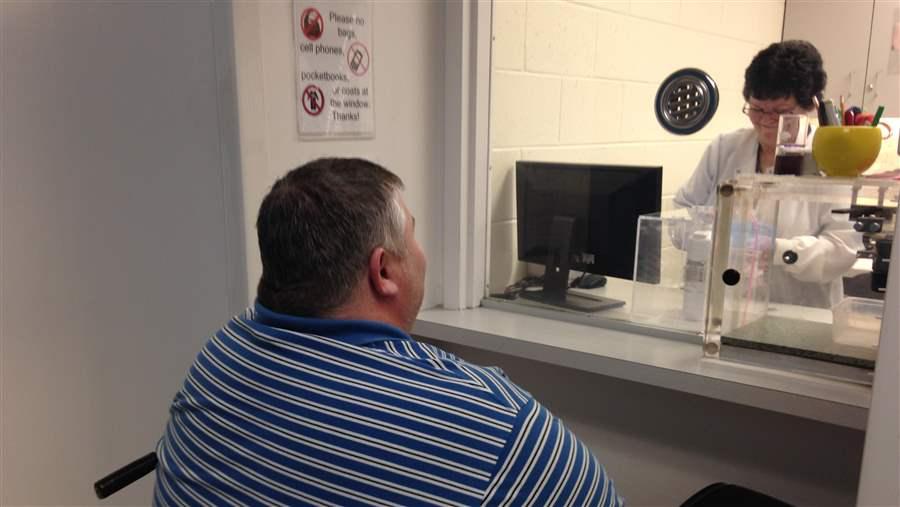 A patient gets a dose of the anti-addiction medicine buprenorphine at the Broadway Center for Addiction in Baltimore, whose treatment methods for opioid addiction are viewed as a model for other clinics.

BALTIMORE — Dr. Kenneth Stoller held court on the sidewalk outside the Broadway Center for Addiction on a sunny afternoon last week, chatting with a troop of lingering patients. He beamed as he patted a young man on the shoulder and said he’d see him tomorrow.

“It’s important for patients to see this as a place that’s safe and accepting,” he said. “For some, it’s the first place they’ve gotten positive reinforcement in their lives.”

Operated by Johns Hopkins Hospital and located two blocks from its main campus, the Broadway Center — or “911” as it’s called because of its address at 911 N. Broadway — has provided methadone maintenance therapy for people with opioid addiction for more than two decades.

But unlike most of the roughly 1,400 methadone clinics across the country, the Broadway Center offers not only methadone, but the two other federally approved addiction medications, buprenorphine and naltrexone, and a full complement of mandatory addiction counseling and group classes. In most other places, addiction treatment is fragmented, leaving patients to shop around for the care they need or settle for whatever is offered at their local opioid treatment clinic.

“If you went to a doctor for any other disease, you’d expect to be offered all available treatment options,” said Dr. David Gastfriend, scientific adviser at the Philadelphia-based Treatment Research Institute, which studies substance abuse treatment. “Addiction treatment should be no different.”

The Broadway Center also collaborates with more than 30 office-based physicians in Baltimore who are licensed to prescribe buprenorphine. Local doctors refer their patients with addiction to the center, which in turn refers its addiction patients to local doctors for physical health care.

Doctors and researchers agree that addiction medications are the most effective weapons available to combat the country’s worsening opioid epidemic. But those medicines are reaching only a fraction of the people who need them.

The center, which operates as a hub for all services for addicts in the city, including housing, transportation and job training, was recognized last year by the U.S. Office of National Drug Control Policy as a model for improving the quality of and access to much-needed opioid addiction services.

Under a grant from the U.S. Substance Abuse and Mental Health Services Administration, Stoller is sharing the details of the program and its outcomes with states beyond Maryland.

So far, Oregon and Washington state have emulated the so-called collaborative opioid prescribing program at some of their existing methadone clinics. Rhode Island is gearing up to launch similar programs at every methadone maintenance center in the state.

Georgia and New Mexico are attempting to recreate the collaborative program, but have so far been unable to convince local physicians to sign up, Stoller said.

Key to the Broadway Center’s success is Maryland’s expansion of Medicaid to low-income adults under the Affordable Care Act and its coverage of methadone at opioid treatment programs.

Two states — North Dakota and Wyoming — have no methadone clinics; a third — Mississippi — has just one.

After research in 1964 showed that the synthetic opioid methadone was highly effective at reducing drug cravings and preventing relapses among heroin addicts, methadone clinics began cropping up across the country, mainly in urban areas most affected by drug use. Their services are typically limited to giving addicts daily doses of methadone, testing urine for drugs, and, to varying degrees, counseling.

From the beginning, methadone clinics were stigmatized by the belief that maintenance treatment merely substituted one drug for another, a bias that persists today. And despite tight regulation by the federal government, critics complain that methadone is diverted to the black market.

As a result, methadone clinics have generally operated outside mainstream medicine, and with little connection to other public health and social services. The Broadway Center is an exception.

When buprenorphine, an opioid similar to methadone but safer, was approved by the U.S. Food and Drug Administration in 2002, the Broadway Center immediately began dispensing it. And when Vivitrol, which blocks opioids and reduces cravings but is not itself an opioid, was approved in 2007, it was added to the center’s roster of medication options. Over the years, the center also has created a robust set of behavioral and general health classes, as well as individual counseling.

But it wasn’t until 2009, when Stoller became director, that the center began collaborating with outside medical centers.

“It was fortuitous,” he said. “We lost our block grant so we needed new patients with insurance. I visited primary care and psychiatric sites to get referrals from physicians who wanted their patients to receive treatment for substance use disorders.”

In doing so, he said, he realized opioid treatment programs like his were missing an opportunity to provide services to the medical community at a time they were most needed.

More than 2.2 million people are suffering from addiction to prescription painkillers or heroin and fewer than half are able to get treatment, said Sylvia Burwell, the secretary of U.S. Health and Human Services, at a February news conference. That’s in part because too few primary care doctors have added addiction medication to the services they provide.

More than 900,000 U.S. physicians can write prescriptions for highly addictive opioid painkillers, yet fewer than 33,000 have signed up for a federal license that is required to prescribe buprenorphine to people who become addicted to them. The vast majority of doctors with federal permission to prescribe the addiction medication rarely, if ever, use it.

That’s despite a spiraling epidemic of addiction to opioid painkillers and heroin. The U.S. Centers for Disease Control and Prevention reported that in 2014, more than 47,000 people died of a drug overdose. Sixty percent of those deaths were a result of opioids. Opioid deaths increased 14 percent over 2013, the biggest surge in deaths yet since the current opioid epidemic began, in the early 2000s.

A hallmark of the Broadway Center’s program is its ability to pivot from one level of addiction treatment to another, depending on a patient’s needs.

“It’s about the right treatment for the right person at the right time, using combinations of medications and counseling,” Stoller said. “Just like any other medical condition, we use all available tools to achieve the best outcomes for our patients.”

Gene, a 45-year-old Baltimore native who didn’t want his last name used because of the stigma connected with addiction, said the center’s willingness to provide treatment tailored to his needs has “opened up a whole new world” for him.

He came to the Broadway Center for the first time in March 2015, after a nearly decadelong battle with heroin addiction that began after he received prescription painkillers for injuries sustained during his semi-pro football career.

He wound up losing his job, his family and his home, and was living in a nearby halfway house. “I looked in the mirror one day and didn’t know who I was,” he said.

That’s when Gene attempted suicide by taking 80 pills of a sedative called Ativan that is known to be deadly when combined with heroin. He ended up at Johns Hopkins Bayview Medical Center, where he received psychiatric treatment and detoxification from heroin. From there he was referred to the Broadway Center.

His first step toward recovery was in an intensive outpatient program with daily doses of buprenorphine and housing provided at the Helping Up Mission, where the Broadway Center has purchased 48 beds. He attended eight mandatory classes a week and at least one individual counseling session, usually eating lunch in the center’s dining hall. He also received a weekly urinalysis to determine whether he was using any illicit drugs.

Because of his injuries and pain, Gene also received occupational therapy and made regular visits to a primary care physician.

“Our reputation is that we’re one of the most structured programs around,” Stoller said. “Some call it strict.” For patients who want a methadone clinic where they take their meds and voluntarily go to counseling, the Broadway Center may not be what they’re looking for.

“We only schedule as many classes as we think they need,” Stoller said. “But our expectations are high and that translates to a sense of hope for patients. If we expect them to achieve high goals, they start to believe they can do it.”

If a patient starts to backslide, Stoller said, “We assign more classes or more counseling. It’s not punishment. We tell them we think they need a little more help to get to their goal.”

Gene didn’t slip up, and he graduated to standard outpatient care in six weeks. After that, he started coming to the center only two days a week and got a take-home prescription for buprenorphine from one of the center’s collaborating primary care doctors. He was continuing to work on pain management and was confident he had his addiction licked.

In September, he left Baltimore to live with his sister in rural Virginia. Removed from his support network here, he was unable to continue counseling and group sessions. None were available nearby.

“I found a group an hour away, but other than that, I was disconnected. That led me back to Baltimore with no armor on at all,” Gene said. After relapsing on March 2 of this year, Gene was re-admitted to the Broadway Center March 24.

“It’s easy to return to treatment because you know what to expect,” he said. “But there’s a certain humility you have to deal with. I didn’t come here right away. I had to man up to do it.”

For Gene, the next chapter will be another intensive outpatient program. He’s also looking forward to double hip replacement and back surgery that he hopes will allow him to get out of his wheelchair.

As for his heroin addiction, Gene said he’s confident his treatment will work. “I know it works. I’m living proof that it works. If you do what you’re supposed to do, there’s no reason you can’t make it work.”