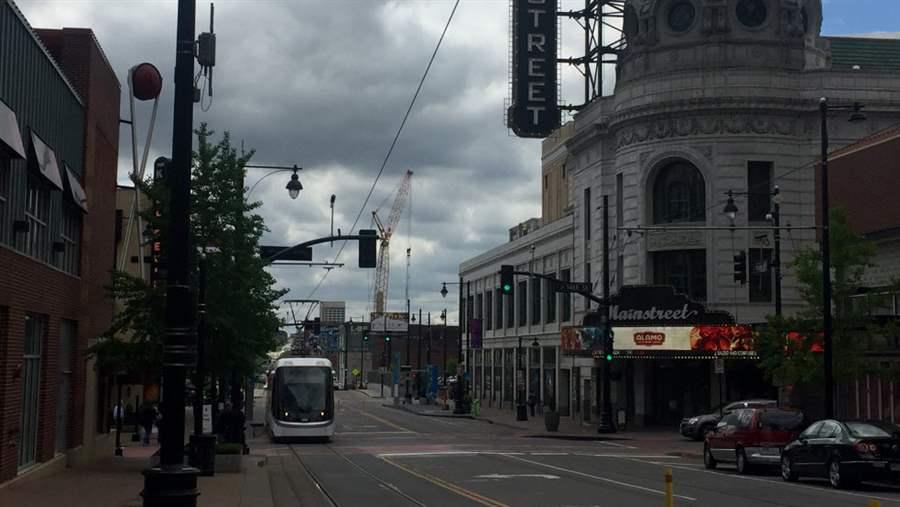 KANSAS CITY, Mo. — On the new streetcars that will start running in Kansas City next week, there’s a decal that says “KC is a smart city.” As the streetcars clang through the downtown business district on trial runs, pedestrians can watch the sentence slide by.

Along the 2-mile streetcar line, Kansas City is installing video sensors to spot badly parked cars, traffic lights that are programmed to keep traffic flowing and digital kiosks that serve as city guides. All this, the city says, helps makes it smart.

But the truth is that there’s no clear definition of a smart city, a label that many cities are grabbing onto by integrating some information technology into some city services.

“The concept of a smart city is somewhat amorphous, but it’s focused on cities leading with technological innovation,” said Brooks Rainwater of the National League of Cities.

“It’s a paradigm shift in the way we think,” said Kate Garman, the innovation analyst for Kansas City.

Some smart city advocates emphasize efforts to engage and connect with residents, others emphasize infrastructure. But the general goal — something no city has yet achieved — is to collect immediate data on everything from traffic patterns to home water use, analyze it, and use that information to make the city work better.

“We have some cities moving in that direction, but a lot more doing little one-offs, really,” said Stephen Goldsmith of the Harvard Kennedy School of Government, a former mayor of Indianapolis and former deputy mayor of New York.

Advocates say smart city technology will save cities money and energy, while better connecting cities and citizens. The White House announced $160 million in spending to research and develop smart city technology. British government researchers estimated in 2013 that the global market for such technology would reach $408 billion by the end of the decade.

But as cities like Kansas City are finding, being smart doesn’t just mean installing new gadgets. It really means changing the way city agencies operate and learning to balance that against security and privacy concerns.

Kansas City has already installed two digital kiosks, the first of 25, near the streetcar line. “They’re in beta testing, so they might not work,” Garman warned recently as she approached a 7-foot unit on the wide and empty sidewalk.

She touched the icons on the kiosk’s touch screen — it worked. They opened to offer information about local news, attractions and public transit. A related smartphone app will push restaurant deals and other promotions to users.

A few blocks away, sensors wired on top of energy-saving LED streetlights will alert the city to cars parked in the streetcar’s path and brighten lights automatically when more than six people pass by.

The features along the streetcar line aren’t revolutionary. The kiosks mostly serve as a high-tech visitor’s guide. In a metropolitan area that sprawls across two states, a few miles of programmable lights and Wi-Fi seem very small.

But Kansas City’s latest smart city efforts, to be launched along with the streetcars, could grow into something bigger. “What you see now is technically called phase one. What phase two is, we still don’t know,” said Garman, a part-time law student and half of the city’s two-person innovation staff.

Kansas City will truly become a smart city when it starts using all this technology to find problems and fix them, she said.

The streetcar corridor isn’t the city’s first investment. In 2010, the state-run police department bought scanners that automatically collect license plate data from passing cars. In 2011, the local electric utility finished installing over 14,000 smart meters in homes and businesses. And in 2012, Google installed internet cables with speeds up to 1 gigabit here.

Kansas City is a finalist for the U.S. Department of Transportation’s $40 million Smart City Challenge, which will fund investments in driverless cars, connected vehicles and sensors. If it wins, the city will develop a self-driving shuttle from the international airport to downtown and expand the kiosks and sensors to other parts of the city, among other initiatives.

As part of its streetcar corridor, Kansas City has also issued an open invitation to entrepreneurs who are developing technologies that could improve city services. A few cybersecurity companies and a drone company are already interested in testing their products here, according to Herb Sih of Think Big Partners, a startup accelerator.

Drones, for example, could help the city save money on searching for an elderly person with a mental disability who goes missing, Sih said. He described a California company that’s developing drones that connect to wristbands; when an alert is issued, a drone can find and hover over the missing person.

The City as a Customer

To aid with the transition, the Kansas City Council last year established a chief data officer position and designated contacts in charge of data in every branch of city government.

Like most cities, Kansas City will rely on outside contractors to build its smart city infrastructure. It has had to figure out how to vet vendors — who, in some cases, are hawking technology that seems straight out of science fiction — and think carefully about security and privacy.

“We get approached by vendors constantly,” Garman said. “There’s so much out there, it’s crazy.”

Kansas City didn’t plan to add sensors, kiosks and Wi-Fi along its streetcar line until it was approached by Cisco Systems Inc., a multinational technology company looking for a city to debut its smart cities software.

Cisco and Think Big Partners researched city agencies to find areas where technology could improve services. The companies and the city agreed on the streetcar corridor as a starting point. Cisco helped identify subcontractors who had the kind of technology the city wanted.

The result is a patchwork of technologies run by corporate partners: a Wi-Fi network run by Sprint Corp., video sensors run by Sensity (a lighting technology company), kiosks run by Smart City Media (a company that makes interactive signs for cities), and — as part of a separate contract — traffic lights run by Rhythm Engineering (a traffic management company).

Cisco made sure Kansas City installed the newest and best technology, Garman said. All told, the city has only had to allocate $3.7 million toward the projected $15.7 million cost of the 10-year partnership, and will share with Smart City Media some of the money raised by advertising on the kiosks.

Not all cities are becoming partners with big corporations. Boston’s innovation office is a little more leery of buying software from them. Often, software engineers at such companies don’t know what problems cities actually face, said Nigel Jacob, co-chair for the Boston mayor’s Office of New Urban Mechanics.

Jacob’s team has worked on research projects for the city since the office was set up in 2010. In the process, it has learned that new technology doesn’t fix every problem.

For example, almost half of requests for city services now come through an app Jacob’s team built. But the app hasn’t engaged new groups of people. Homeowners, the group most likely to call in a problem, are also the most likely to use the app.

Smart city technology exposes infrastructure and potentially personal data to computer malfunctions and hackings. The more data cities collect, the easier it’ll be to aggregate a detailed picture of an individual’s life.

“From an ideal privacy perspective, much of this technology is a bad idea,” said Jeffrey Mittman, head of the American Civil Liberties Union of Missouri. But technologies such as license plate scanners and drones exist, and are being used. So the question becomes how to manage the data collected, he said.

Kansas City has tried to address privacy concerns in a few ways. In April 2015, the City Council passed a resolution that laid out a number of basic data privacy principles, including a promise to consider public well-being before collecting, using and disclosing personal information.

Kansas City contractually owns all the data collected by Cisco, Sensity and Smart City Media, such as the most popular time of day for accessing a certain kiosk in a certain location. The companies can’t sell or use the data without permission. The kiosks will be able to use the interactions between users and devices to sell advertising. That’s how they’ll raise revenue.

Sprint owns the Wi-Fi data, and will follow the usual industry practice of having users click yes on a user agreement.

The city is choosing to collect less data than it could, Garman said. Her office will receive only bulk data, although cameras in the kiosks and lights will record video footage. The city will only request that footage in an emergency, such as a terrorist attack. Because it won’t have the footage, it won’t have to release it in response to a public information request.

Garman said that some potential uses of the light sensors will require users to opt in — for example, to get a text message alert when their car is parked in the streetcar’s path.

Although Kansas City’s innovation office holds periodic events to educate the public about its projects, Mittman thinks the city should do more. “The average Kansas Citian likely doesn’t know how they’re being tracked,” he said.

Chances are, the average Kansas Citian is already being tracked by private companies. Think of how Google saves everyone’s search history, or how retailers can now use video cameras to track customers through the store or use Bluetooth beacons to send customers promotions.

“This is the future, and as a city government we need to be responsive to our citizens’ expectations,” Bennett said. “And as we move toward the 22nd century we need to be a data-driven organization, we need to be connected.”