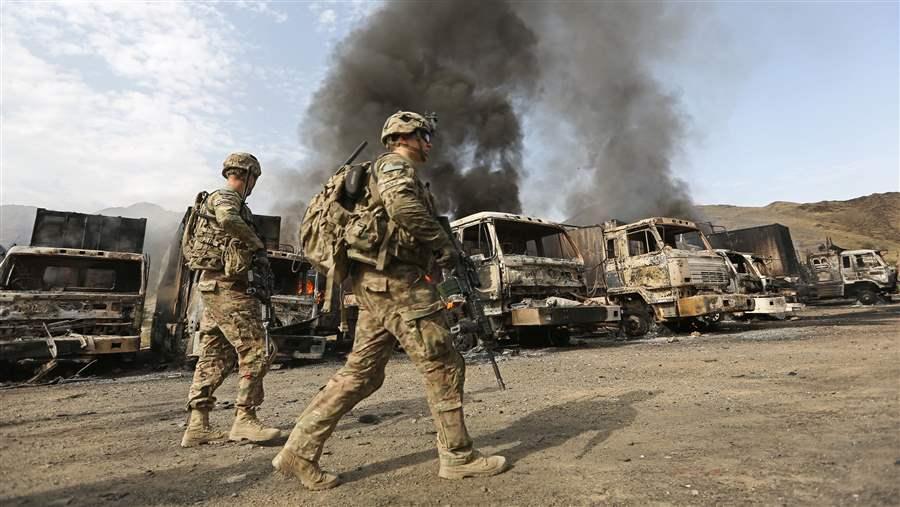 U.S. soldiers investigate a suicide attack in Afghanistan. Some states are stepping in to help veterans who suffer from post-traumatic stress disorder.

A staggering share of veterans who served in Iraq and Afghanistan have been returning home with mental illnesses brought on by their time overseas. But as hundreds of thousands struggle with post-traumatic stress disorder, many are going without the help they need, which is prompting several states to step in.

State officials say they are trying to bridge what they see as gaps in services provided by the U.S. Department of Veteran Affairs, whose medical centers have been plagued by mismanagement, often face lengthy backlogs and can be located far from rural communities.

If veterans with PTSD aren’t treated while their wounds are still raw, it will end up costing not only the veterans and their families, but society, according to state lawmakers and mental health workers. Veterans with PTSD are more likely to be depressed, drink heavily or use drugs, and many have trouble working and maintaining relationships — problems that cost billions of dollars in lost productivity.

And because members of the National Guard — who report to their governors and serve within their states when they are not mobilized for active duty — deployed at record levels during the wars in Iraq and Afghanistan, states are looking after their own. National Guard members often face more challenges upon returning home. While other service members return to military bases, surrounded by support, guard members move back into their communities, which are often rural and where few resources are available.

Starting this year, Texas will give money to nonprofits and private programs that provide treatment to veterans with PTSD and their families. New Hampshire has been training community mental health staff since last summer on how to find veterans and treat their PTSD. And New York is expanding a program that connects service members and veterans with mental health needs in small settings or in activities such as yoga and tai chi.

Although state and local governments have long relied on the VA, states have an obligation to veterans, and they need to do more, said Kathryn Power, a regional administrator for the Substance Abuse and Mental Health Services Administration. The agency encourages local governments at a minimum to train mental health center staff about military culture, and make sure they know how to help veterans and their families.

The top objective of the Iraq and Afghanistan Veterans of America, a national nonprofit with more than 400,000 members, is to get lawmakers at the national and local level to improve access to and quality of mental health services. The National Guard Association of the United States, which represents guard members in all 50 states, Washington. D.C. and U.S. territories, says that despite the efforts of some states, more services need to be made available locally.

Since 9/11, guard members have been deployed 544,000 times. Many were sent on multiple tours and often came home to find little support, said Matt Pincus, a legislative affairs manager at the guard association.

With an all-volunteer military, including the National Guard, it is “unacceptable” not to help, Pincus said. “It is a dereliction of our responsibility to them.”

Aware that many states face tight budgets, the association wants Congress to provide funding for states in block grants so states can train mental health providers to better treat veterans with PTSD. The association also supports a bill that would allow providers outside of the VA to deliver VA services, including mental health.

Veterans who served after 9/11 experienced a range of traumas — from explosions and sexual abuse to seeing friends wounded or killed. Eleven to 20 percent of them have been diagnosed with PTSD. The number diagnosed each year steadily increased until 2012, when it reached a peak of 21,017. In 2014, the last year for which data is available, 16,012 veterans were diagnosed.

PTSD is a severe mental illness with symptoms that can start shortly after trauma or years later. Veterans with PTSD often relive their trauma, feel alert or in danger, have trouble sleeping, and avoid certain places or activities, said Dr. Jennifer Klosterman Rielage, a clinical director of outpatient trauma programs at the New Mexico VA Health Care System. It can bring on depression, strain relationships, and make it hard to go to work and school. Many drink or take drugs to cope with everyday life, Rielage said.

Veterans of the Vietnam War who suffered from PTSD have faced twice as much substance abuse, divorce and homelessness as those without it. A 2008 Rand Corporation study projected that PTSD and major depression among veterans who deployed from 2001 to 2007 would cost the nation $4 billion to $6.2 billion over two years, mostly in lost productivity.

After hearing about guard members who were struggling to get treatment, California began a program in 2006 that pays for eight clinicians in the California National Guard to serve as regional contacts and provide referrals to those experiencing a crisis, said Susan Pangelinan, a guard coordinator.

The program costs the state $1.5 million a year, but it prevents costs down the road, Pangelinan said.

A Connecticut program that began in 2007 was designed to support guard members, with a 24/7 help line, counseling and case management services. It was expanded to serve all service members and veterans, and was lauded as a program that could be replicated nationally. But the program is one of many being cut in Connecticut as Democratic Gov. Dannel Malloy attempts to close the state’s $220 million budget deficit.

Of the more than 2 million veterans who served in Iraq and Afghanistan, four in 10 have never used VA medical care.

Providers say there are many reasons veterans don’t go to the VA for mental health treatment. The closest clinic may be hours away. Some still work for the military in civilian roles and fear their employer will find out about their problems. For many, it’s simply the stigma.

The VA often treats the illness with counseling, using techniques such as cognitive behavioral therapy or exposure therapy, in which a counselor helps clients understand their trauma and change how they think about it. The VA also can offer medication.

In Texas, the new program will provide matching grants to nonprofits that offer counseling and treatment, such as therapy that uses dogs and horses to help with physical and emotional problems, said Sonja Gaines, the associate commissioner for mental health services for the state’s Health and Human Services Commission. The first phase will provide $1 million, with another $20 million to follow.

New Hampshire is using money from the federal government meant for health services to provide better care for veterans, said Jo Moncher, bureau chief of military programs for the state’s Department of Health and Human Services.

Of 115,000 veterans in the state, only about 30,000 receive care at the VA. The state gave each of its 10 community mental health centers $10,000, which Moncher said is to be used for training in military culture, including teaching employees the values that service members live by, the challenges they face, and effective methods for treating PTSD. It also created a military liaison in each center to guide veterans to the services they need.

The initiative is part of a larger $2.8 million campaign to find veterans who may need help and connect them with health services, housing and employment. The campaign has taught staff in many state agencies to ask the question: Have you or a family member ever served in the military? If the answer is yes, they know how to help, Moncher said.

Because family members are not eligible for most VA services, the New Hampshire and Texas programs are also reaching out to families to see if they need counseling or other help.

Some states recently passed or considered measures to allow judges to acknowledge the affects PTSD has had when sentencing veterans in criminal cases.

Others are studying the effectiveness and availability of PTSD treatment. Texas passed a law last year that requires the state to conduct a clinical study on the effects of mental health treatment for veterans and their families. Puerto Rico passed a law to investigate the supply, availability and effectiveness of services for the diagnosis and treatment of veterans with PTSD.

New York offers a different approach to treatment. The Pfc. Joseph P. Dwyer Veteran Peer Support Program, inspired by a veteran who died after struggling with PTSD, began in 2012 as a county-run program in Long Island and has since spread to over a dozen counties. It is funded by $2.8 million from the state in fiscal 2016.

Participants can meet one-on-one with program staff and attend group meetings, or take part in programs such as tai chi, yoga and drum circles, said Thomas Ronayne, the director of the Veterans Services Agency in Suffolk County, where the program started. The program is open to all service members and veterans, and the idea is to provide comradery and someone they can relate to.

“We all have that one foundational piece that brings us all to the center — and that is that we have all worn the uniform,” Ronayne said.

U.S. Rep. Lee Zeldin, a New York Republican and a veteran who introduced the bill to launch the Dwyer program as a state senator, this year introduced legislation in Congress that would spread it across the country.

And New York Assemblyman David DiPietro, a Republican, introduced a bill this year that would start a trust fund to pay for treatment for veterans who suffer from PTSD and traumatic brain injury. “We actually should be taking a leading role for helping our veterans,” DiPietro said.