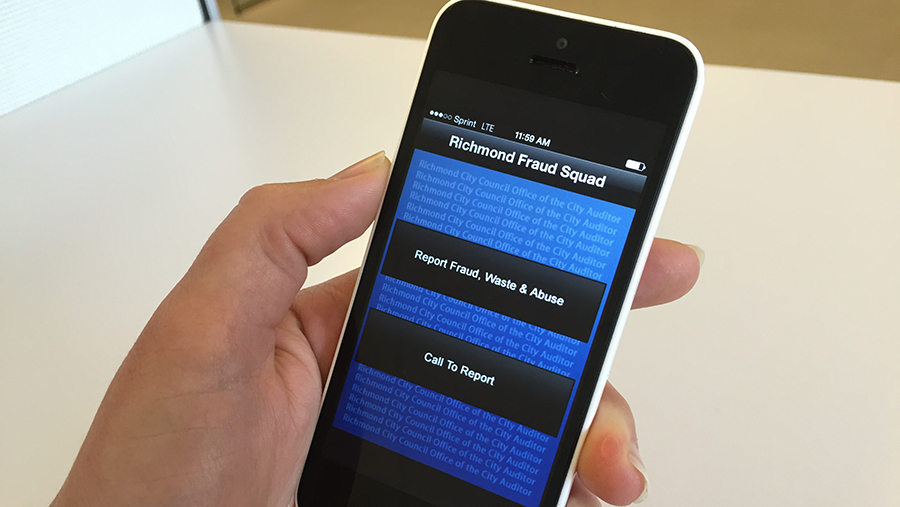 Richmond’s fraud app allows residents to report government waste, fraud and abuse. Though fraud apps can cost thousands to develop, auditors say the money they help recover can more than outweigh their costs.

In Long Beach, California, six city employees were fired after people complained items had gone missing from inside impounded cars. In Philadelphia auditors found safety issues in a dozen rental properties as well as over $350,000 in unpaid taxes. And in Richmond, Virginia, a city employee is on the hook for nearly $10,000 in bogus expenses.

All of these cases were brought to auditors’ attention by tipsters using hotlines or fraud apps, which allow smartphone users to anonymously report government waste, fraud and abuse.

Cities and states have long had hotlines for reporting misuse of government resources. But mobile apps bring a new level of sophistication. They allow people to submit photos and videos in support of their claims; and in some cases auditors can use the app to respond and ask for follow-up information, all while maintaining a tipster’s anonymity.

“Smartphones are becoming a ubiquitous tool, and I think we need to meet people where they are,” said Dave Yost, the state auditor who in 2014 introduced a fraud app in Ohio.

The cost of developing the apps varies. Ohio was able to develop its app in-house, while Richmond spent about $10,000 for outside help. Pittsburgh’s app was unveiled this month. It cost $20,000 to develop and will cost $3,000 for upkeep, but it also allows users to access a range of databases on city contracts and campaign contributions.

In many places, it’s hard to discern how much of a difference the apps are making compared to traditional hotlines because auditors don’t keep track of where tips originate. Many of the apps allow users to call a fraud hotline from the app.

So far, relatively few citizens have downloaded the apps. In Long Beach there have only been 160 downloads. In Ohio there have been 673. In Philadelphia, which in 2011 developed one of the first fraud apps, there have been 2,015 downloads.

Whether tips are received through a hotline or an app, governments have received valuable information.

Tips from residents led the Philadelphia Controller’s Office to investigate 261 properties. Thirty-six of the properties had altogether 135 code or licensing violations, including fire code issues and poor maintenance. One property was cited as being in imminent danger of collapse. Beyond safety issues, several of the properties had unpaid property and water taxes totaling just under $357,000.

“The amount of interaction we get is more of a benefit than the cost to develop the app,” said Brian Dries, the spokesman for the city controller, of the app’s $9,000 price tag.

After citizens in Long Beach complained about items going missing from towed and impounded cars, six city employees were fired. And an audit brought about changes to the way the Towing and Lien Sales Division takes inventory and accounts for money.

Not all tips result in reports, and many are difficult to investigate.

In Philadelphia and Long Beach, about a quarter of all tips are flagged as not providing sufficient evidence, so the tips do not get more than an initial review.

In many cases, tips are referred to other government agencies, to follow up on a personnel matter or to investigate something within that agency’s jurisdiction. In Ohio, tips about drug dealers or a photo of someone’s Facebook post offering to sell food stamps are forwarded to the agencies that can take action, Yost said.

But the state is obligated to look into tips that make accusations against city officials, regardless of how implausible they may seem, Yost said. That includes a recent tipster’s observation that though his town was on the verge of bankruptcy, the mayor was seen buying lottery tickets at multiple gas stations around town.

In many cases, the tips come from government employees. A study of 58 tips to the Long Beach City Auditor’s Office hotline found that 40 percent of callers were city employees and 36 percent were residents. The remaining 24 percent chose to remain anonymous.

Though government employees are often protected by whistleblower laws, many may still be hesitant to go through official channels to report any problems they see.

In Richmond, where a fraud app was introduced in 2012, Craig Johnson, investigations manager for the City Auditor’s Office, estimated that 70 percent of the tips his office gets are from government employees, based on the wording of the complaint or the specificity provided.

One recent tip, however, led city investigators to nearly $33,000 in questionable, unjustified or fraudulent spending by a Richmond employee who, among other things, overcharged the city for travel expenses. That includes billing the city for a conference in Portland, Oregon, which she never attended, traveling instead to Seattle.

The employee pled guilty and will have to reimburse the city $9,556. The tipster is eligible to receive an award of 10 percent of the recovered funds, up to $5,000.