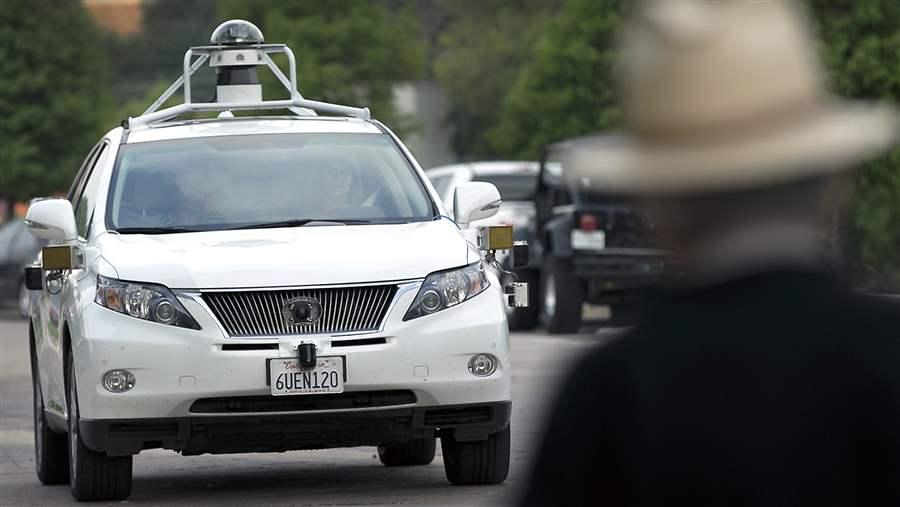 A Google self-driving SUV is tested in Austin, Texas, where city officials have welcomed autonomous vehicles.

Cars driven entirely by computers are popping up all over Kirkland, Washington’s suburban hills, negotiating residential roads and powering through Pacific Northwest rains, all without regulation from the city or state.

In the absence of federal guidelines on testing and developing the vehicles, some cities, excited about their potential to improve traffic safety and increase mobility, are welcoming the cars, allowing Google and other companies to get their self-driving cars off controlled test tracks and onto real roads with authentic driving conditions.

So far, few states have moved to regulate the vehicles. But as the technology in self-driving cars advances, some are debating whether emergency steering wheels and brakes should be required when the vehicles become available to the public, and some wonder whether the cars are safe enough to be piloted even without a human on board.

“Cities and communities can wait for disruptive technologies to wash over them and change the world or they can jump in and help direct where that change occurs,” said Robert Spillar, who directs the Transportation Department in Austin, Texas, where Google is also testing the cars.

Local governments will have to balance autonomous car programs with existing city infrastructure, said Susan Shaheen, a research director at the Transportation Sustainability Research Center at the University of California, Berkeley. That means deciding where the cars can drive, park and unload passengers as well as evaluating their potential impact on congestion and the environment.

“There’s often a tension,” she said. “How do you guard or protect public safety, the interests of the environment? What is the role of government?”

This year legislation to regulate autonomous vehicles was introduced in at least 14 states, according to the National Conference of State Legislatures. Eight states and the District of Columbia have already addressed how and when self-driving cars can be tested, or, in some cases, how they will be treated when they are commercially available.

Remaining states are silent on autonomous vehicles, leaving the door open for car and technology companies to take test runs on public streets with little regulation.

Approving Google’s request to test the autonomous cars — which rely on computers instead of human drivers and are seen as a way to help people get around and improve traffic safety — on city streets was a natural move for Kirkland, according to its city manager, Kurt Triplett. The city is already home to a Google campus and has invested in pedestrian safety and mobility for residents who cannot drive.

“We feel like the technology is potentially transformative,” Triplett said. “If we can help facilitate its development, we wanted to be a part of that.”

After discussions about the safety of the cars with Google officials, and the company’s commitment to assume liability for them, Kirkland officials concluded that the risk posed by allowing them on city streets was low, though a test car in California did cause an accident in February when it veered into the path of a public bus.

Google test cars have been involved in 17 minor crashes during their seven years on public roads, though the company says the majority of those incidents were a result of “distracted or inattentive driving” by human drivers.

Google has been testing on public roads in California for more than seven years and took the vehicles to Austin last year. It says the real-world conditions help improve the cars. The company has also pushed for federal guidance and uniform rules across the country, arguing that a patchwork of state laws will make it impossible to operate self-driving cars across state lines.

With as many as 85 million autonomous-capable vehicles expected to be sold around the world by 2035, some states aren’t waiting for federal guidance and are moving to regulate driverless cars on their own.

Nevada became the first state to authorize and regulate autonomous cars, in 2011, hoping to become a model for other states and an attractive place for car and tech companies. The state requires driverless car companies to explain and demonstrate how their technology works before they are awarded a restricted license detailing how, when and where cars can be tested on state roads.

“This is how you build a safe program for testing and deployment, regardless of what the feds do or don’t do,” said Jude Hurin with the state Department of Motor Vehicles.

Four years into that program, DMV officials are looking to relax those regulations. Their proposal would require only one person (not two) to be in a car while it is being tested and would allow people who may not qualify for a regular driver’s license, because they have a physical disability or other impairment, to test the vehicles with assistance.

“The DMV fully recognizes that we’re not in the technology business and so we need to just take a step back,” said April Sanborn, a DMV manager. But, she said, some regulations are necessary to ensure the cars operate safely and under existing state laws.

In Florida, lawmakers opened the door to autonomous vehicles eventually being sold to consumers.

And in Utah, where until recently there had been no law regulating driverless cars, one lawmaker says it’s time for that state to get in the game. State Rep. Robert Spendlove, a Republican, wants state agencies to develop standards for testing autonomous vehicles that can be used as a model for other states.

“This isn’t going to be a one- or two-year process,” Spendlove said. “This is going to be over the next 10 to 15 years that we’ll be developing this technology.”

But not all states are relaxing their regulations. California’s Department of Motor Vehicles has suggested that all commercial self-driving cars would have to have a licensed driver in the car and need a steering wheel and pedals to operate on state roads, a move autonomous car companies say would effectively shut down access for people who cannot already drive on their own.

Deciding Not to Regulate

Because most states lack rules on testing autonomous cars, deciding whether to allow the vehicles on public streets can be left to local governments.

Like leaders in Kirkland, officials in Austin say that with Google taking on liability for the cars, there was no reason not to bring them into town, and they could mean new access to transportation for seniors, the disabled and others who don’t have it now.

But, looking to the future, they don’t know how they might regulate the cars once they become available for public use.

Spillar, the city’s transportation chief, speculates that the city might eventually have to regulate the cars if they’re used by ride-hailing companies like Uber and Lyft.

And revenue from parking fees may decline in the future as driverless cars travel around while their owners are home, at work or running errands on foot, but the city can work on that down the road, he said.

“It’s easy to envision a day when everybody has an automatic car,” Spillar said. “It’s called ‘The Jetsons.’ ”