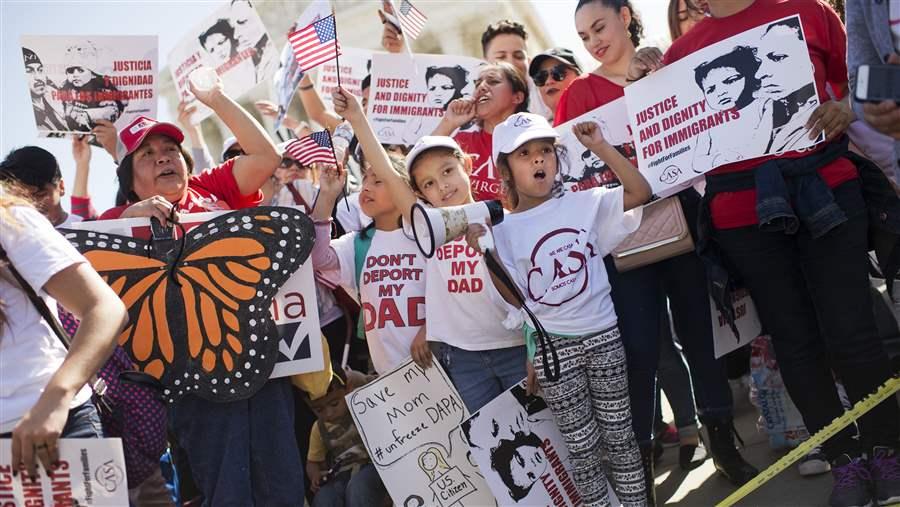 As U.S. Supreme Court justices weigh whether President Barack Obama has the power to grant legal work status to about 3.5 million undocumented immigrant parents, states are weighing the costs of the decision. And they are divided on whether they will be helped or hurt economically — regardless of how the justices rule.

Justices on Monday heard arguments in the case, in which the Obama administration seeks to overrule a lower court order halting the policy. Texas and 25 other states challenged the president’s 2014 executive action to give deferred deportation and legal work status to parents of U.S. citizens in a plan called DAPA, Deferred Action for Parents of Americans and Lawful Permanent Residents, also called Deferred Action for Parental Accountability.

One in four Hispanic children has an undocumented parent, according to a new study by the National Research Center on Hispanic Children & Families.

Only parents here since 2010 and who haven’t been convicted of a felony or repeat misdemeanors would qualify to stay without immediate threat of deportation if DAPA is allowed to go forward.

But if the policy is struck down, parents could face the threat of deportation for being here illegally — though many of their children, an estimated 4.5 million, could remain legally because they were born here and therefore are citizens.

“There is a pressing humanitarian concern in avoiding the breakup of families that contain U.S. citizen children,” U.S. Solicitor General Donald Verrilli argued before the court.

In seeking to overturn the policy, Texas argued that it would cost the state millions of dollars to give the immigrants driver’s licenses because state law requires that people authorized to work be eligible for licenses. The administration argued that Texas can’t sue just because it would lose money issuing licenses when it’s free to deny licenses to DAPA recipients or raise fees.

But lawyers for 16 other states, led by Washington, argue they would be better off economically if DAPA was upheld. They said granting legal work status for these parents would bring in more tax revenue as they get better jobs, and prevent costly foster care for children left behind should their parents be deported.

Overall, unauthorized immigrants already pay $11.6 billion annually in state and local taxes, according to a February study by the Institute on Taxation and Economic Policy, a tax policy think tank in Washington, D.C. That includes $1.5 billion in Texas and $3.2 billion in California, states with the most undocumented immigrants.

DAPA-eligible parents alone add $210 billion to the overall economy, a UCLA study in 2014 estimated. Combined with an existing policy that allows immigrants who arrived here as children to avoid deportation and work legally for two years, California could reap an additional $900 million in state taxes over five years if DAPA is implemented, a 2015 report by the left-leaning Center for American Progress estimated. That report also estimated additional tax receipts of $347 million for Illinois, $184 million for New York and $25 million for South Carolina.

DAPA was halted by an injunction before it started, and that injunction was upheld by an appeals court in November. In the case argued Monday, the Obama administration asked the Supreme Court to lift the stay on the policy and allow DAPA to start enrolling parents who qualify.

Advocates say the policy needs to move forward as soon as possible, citing recent research that indicates that children fall behind in school when their parents fear deportation.

One thing the Texas lawsuit does not challenge is the deportation priorities that took effect in 2015, which made most law-abiding undocumented immigrants a low priority for deportation. The Migration Policy Institute estimates the policy protects 87 percent of the unauthorized people in the country, or 9.6 million, from deportation though the government retains the right to make exceptions.

But while unauthorized immigrant parents may not face immediate deportation if DAPA doesn’t go forward, they may remain in constant fear of it.

The justices aren’t expected to rule until June. And the divided court, with only eight justices following the death of Associate Justice Antonin Scalia, could rule a number of ways: In addition to ruling for or against Texas on whether the president has the power to authorize DAPA, it could be deadlocked 4-4, which would allow the lower court decision to stand and block the policy in at least part of the country. Or it could decide that Texas didn’t have legal standing to sue, which could allow the policy to go forward.

Texas based its case on driver’s license processing costs, saying the state loses more than $130 on each license it would be forced to offer DAPA parents, a potential cost of up to $60 million that gives the state standing to sue, it says.

Washington and the states, along with the District of Columbia, that want DAPA to go forward called the Texas argument “distorted” and said delaying the policy “is preventing our state and millions of our residents from receiving substantial economic, social welfare and public safety benefits.”

Along with increased taxes from the better earnings immigrants could gain from legal work status, the proponents argued states will benefit from lower law enforcement costs as more immigrants cooperate with police. States could also avoid unnecessary foster care cases that arise when children are separated from their deported parents, they argued.

They also argued that states would have fewer traffic deaths because all drivers would be licensed, pointing to a January study by the Commonwealth Institute For Fiscal Analysis, a think tank focused on low- and moderate-income earners, which suggested that driver training and testing of undocumented immigrants helped lower the number of traffic deaths in states where licenses are issued regardless of immigration status.

“We are convinced that it will create more tax revenue, but more importantly, it will keep families together,” said Noah Purcell, Washington’s solicitor general.

Some states are split. In Maine and New Mexico, Democratic attorneys general signed on to the Washington brief supporting DAPA, but their Republican governors joined the other side. New Jersey Gov. Chris Christie signed one anti-DAPA brief, along with New Mexico Gov. Susana Martinez, while Maine Gov. Paul LePage signed another.

Conversely, Nevada’s Republican attorney general joined the Texas lawsuit, while Gov. Brian Sandoval, also a Republican, said he does not support the challenge. Nevada has the nation’s highest share of schoolchildren with an unauthorized immigrant parent, at 18 percent, according to Pew Research Center estimates. (The Pew Charitable Trusts funds the Pew Research Center and Stateline.)

Although deportation priorities may have minimized the threat of parent deportations, the deferred deportation and permission to work conferred by DAPA is important for immigrants’ peace of mind, said Randy Capps, a demographer at the Migration Policy Institute.

Raids by U.S. Immigration and Customs Enforcement agents in January targeted only 121 people who had crossed the border recently or failed to show up in immigration court, but “they scared everybody,” Capps said.

As a result, information-sharing networks have sprung up on social media to help immigrants stay alert for roadblocks and raids that could separate them from their children. But they can also be a source of worrisome rumors, Capps said.

“That’s why the work authorization is so important: It allows people to step out in the open and work without being afraid. It makes a big difference for the well-being of their children,” he said.

According to estimates by Capps’ group, the areas with the most potential DAPA beneficiaries are California, with almost 1.1 million eligible parents, and Texas, with about 560,000. Other states with more than 100,000 are Florida, Georgia, Illinois, New Jersey, New York and North Carolina.

Fear of deportation can cause parents to worry and sometimes fail to get services that help their U.S.-born children in even the most immigrant-friendly parts of the country.

In Baltimore, where Mayor Stephanie Rawlings-Blake has welcomed immigrants regardless of status, the January raids caused widespread concern among parents, said Adonia Simpson, managing attorney for immigration legal services at the Esperanza Center, part of Catholic Charities of Baltimore. In February, the center helped dozens of parents create power-of-attorney files in case they’re separated from their children by deportation.

“It does provide a little peace of mind for people to have a plan in case the worst happens,” Simpson said. “At least you have someone you can call on who can manage your money and take care of your kids.”

Until recently in South Carolina, immigrant children of undocumented parents were denied in-state college tuition rates and state scholarships even if they were U.S. citizens. The state has agreed to stop the practice in a move toward settling a lawsuit, said Tammy Besherse, a staff attorney for the South Carolina Appleseed Legal Justice Center, which advocates for low-income people.

The three students who sued have now been enrolled with in-state tuition and financial aid, Besherse said, “but there’s no telling how many students quietly accepted the policy and decided against going to college.”