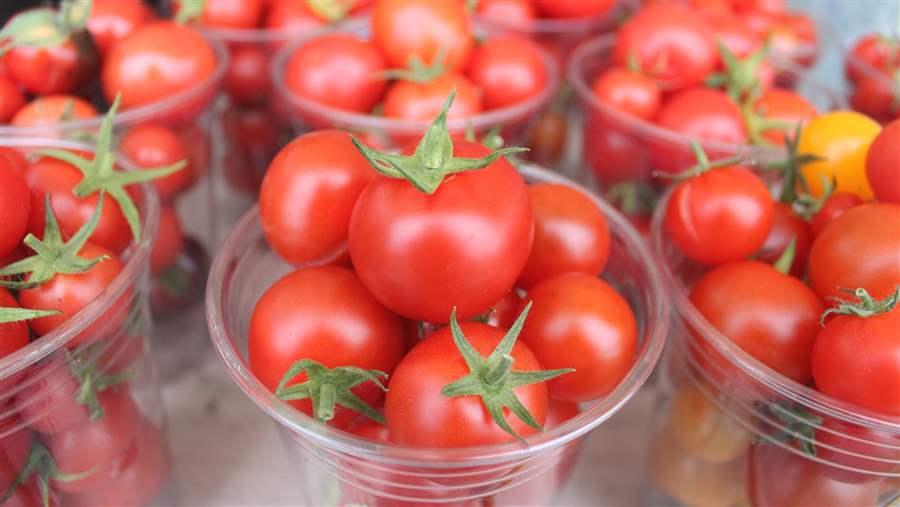 Growers of fresh fruit and vegetables will be subject to food safety regulations for the first time under the federal Food Safety Modernization Act. States will start to decide this year if they will enforce the law or leave it to the federal government.

This story has been updated; Congress authorized the law in 2010.

With the most extensive food safety regulations in history set to take effect soon, state agriculture officials across the country are preparing to enforce the federal law, but say their ability to inspect farms and enforce the new standards depends on the receipt of promised federal funds.

The law — which Congress approved in 2010 following several high-profile outbreaks of foodborne illnesses, linked to contaminated spinach, tomatoes and peanut products — comes at a time when demand for fresh vegetables is increasing. And it marks a shift in focus for the nation’s food safety system, from containing foodborne illnesses once they occur to preventing those outbreaks in the first place.

It gives the U.S. Food and Drug Administration new authority to regulate the production of fresh fruit and vegetables. It also imposes the same food safety standards on imports as it does on domestic foods, and includes provisions to create a more integrated food safety system across all levels of government — federal, state and local.

The law, known as the FDA Food Safety Modernization Act (FSMA) and set to take effect gradually through 2020, applies to all farms except meat, poultry and egg producers. Farms that have less than $500,000 in annual sales are not covered, although their buyers may insist that they adhere to the same standards.

And the FDA reserves a key role for states in ensuring that farmers comply with new standards for water quality, sanitation, the handling and composition of compost, and worker training and hygiene. That means on-site inspections and laboratory testing water used in irrigation and soil used in planting.

“State agriculture and public health personnel are the ones who have built relationships with and knowledge of local farming communities and practices and can often deliver oversight most efficiently,” top FDA officials wrote last month. “But almost all states will have to build produce safety programs largely or completely from scratch. We want to rely on them, not only to deliver education and technical assistance, but also to provide ongoing compliance support and oversight.”

Several states that produce little of the fresh fruit and vegetables covered by the law — states such as Montana, North Dakota and Wyoming — are expected to opt out, leaving that work to federal authorities. But Bob Ehart, a senior policy and science adviser of the National Association of State Departments of Agriculture (NASDA), which has worked closely with the FDA, said that most states, particularly those with extensive food production, seem likely to work with the federal government to carry out the law. The largest producers of fruits and vegetables are California, Florida and Washington.

Under the law, the federal government is to pay for those new state activities. Several state agriculture departments say it’s too soon to know how much it will cost them. But many are now preparing applications to the FDA, seeking a share of the $19 million that Congress set aside in 2016 to help states determine what they need to do to help enforce the law, including adopting new state laws or regulations, and identify the farms that it will cover.

The new food safety push comes as the federal government is encouraging Americans to eat more fresh fruit and vegetables, and consumers are following that advice.

But while the federal government and states have long regulated some areas of food production and handling, such as food processing and animal feed, fresh fruit and vegetable growers have largely been left to their own devices.

Several lethal outbreaks of foodborne illnesses convinced lawmakers in both parties, as well as food industry groups and public health advocacy organizations, that the U.S. food safety system was antiquated and ill-equipped to prevent future outbreaks, Ehart said. “There was a recognition that we needed to be preventive. We need people to produce food, but we need them to make it safe.”

While most food contamination is thought to occur on farms, it also occurs during transport, packaging and handling by wholesalers and grocers.

The results can be deadly. The Centers for Disease Control and Prevention estimates that 48 million Americans get sick from foodborne illnesses every year; 128,000 of them require hospitalization; and 3,000 die. The annual cost of those foodborne illnesses is $15.5 billion, according to an estimate by the U.S. Department of Agriculture.

States that choose to participate must decide exactly what role they wish to play, which could include training farmers in the new law and conducting on-site inspections and laboratory testing, as well as determining which state agencies should have responsibility for that work. They must also enact laws or write policies that authorize that role and enable the state to apply for or spend the federal funds. And they must determine which farms in their states are subject to the law, which in turn will determine how many people will be needed to enforce it.

But states have been clear about one thing: “They won’t be doing this work unless the feds provide the resources to do it,” said Katy Coba, director of the Oregon Department of Agriculture. “We don’t have the funds to do this work.”

Joe Reardon, the North Carolina Department of Agriculture assistant commissioner for consumer protection, agreed. He expects many states to increase their own expenditures on food safety, “but it’s equally true that the states have made it clear to the FDA that they will expect additional funding from the federal government.”

Food safety and consumer groups, as well as other organizations, including The Pew Charitable Trusts, have called for adequate funding of the law. (Pew also funds Stateline.)

President Barack Obama’s 2017 budget calls for another $11 million for the states to begin to implement it. NASDA has asked for more — $100 million — and the U.S. House and Senate are considering proposals to increase the contribution to the states. “What we’re hearing from our members is that we can’t implement it until we have federal funding and the day we don’t have the funding we need we will give the whole job back to the FDA,” Ehart said.

But there may be a few exceptions. “A Montana or Wyoming or North Dakota doesn’t have a lot of produce farms and may think it’s not worth going through the process of setting up [state] laws so they can enforce FSMA,” said Jeff Farrar, the FDA’s director of intergovernmental affairs and partnerships in the office of foods and veterinary medicine. In such cases, the federal government will do inspections and enforcement itself.

The food industry has largely supported the law. “They take a lot of pride in the product they are growing and they don’t want someone to get sick from it,” Coba, the Oregon agriculture director, said.

And “the industry understands they are going to sink or swim by their weakest members,” said Jamie Clover Adams, director of the Michigan Department of Agriculture and Rural Development.

In Michigan, tomato growers saw their sales suffer in 2008 after a bad outbreak of salmonella was traced back to tomatoes grown in the Southwest U.S., Adams said. Similarly, if an outbreak occurs in a particular name brand product — for instance a brand of peanut butter — consumers will avoid all peanut butter rather than just that brand, she said.

But large producers were upset that smaller farms were exempted from the law. They also pushed to ensure that food imports face the same standards as those applied domestically.

“Many of the legislators we talked to said one of the reasons they voted for [FSMA] is that it required a level playing field for international growers and domestic growers,” Farrar said.

And the industry has tried to shape the FDA rules that will provide specifics on the law and how it will be enforced, said Roland McReynolds, executive director with Carolina Farm Stewardship Association, a nonprofit that represents farmers and food businesses in the Carolinas.

Those rules could, for example, tell farmers how often they need to submit water samples for testing, the type of compounds that can be used to clean workers’ toilets, and what constitutes “adequate” cleanliness.

For farmers, those specifics translate into costs but also choices in what types of crops they choose to grow. “There is a lot of area of concern where rubber meets the road on this,” McReynolds said.