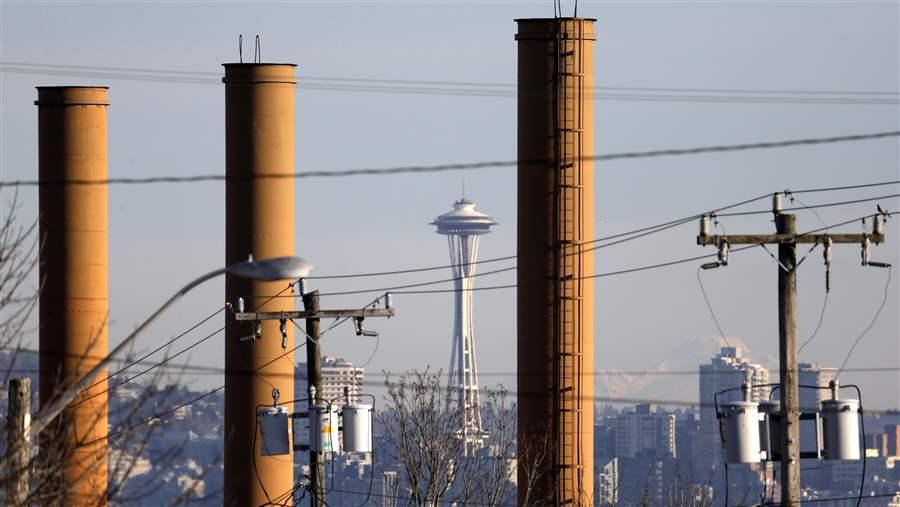 Seattle’s space needle seen through the old stacks at the Nucor Steel plant. The plant is among those likely to be affected if Washington becomes the first state to tax carbon pollution from fossil fuels such as coal, gasoline and natural gas.

OLYMPIA, Wash. — In November, voters here may make their state the first in the U.S. to impose a tax on carbon-based fuels such as coal, gasoline and natural gas to reduce greenhouse gas emissions and combat climate change.

Patterned after a similar levy just over the Canadian border in British Columbia, the ballot initiative would make carbon fuels more expensive, thus discouraging their use. The levy would hit consumers and businesses by increasing the price of gasoline, fuel oil and electricity.

According to backers of the Washington plan, the tax was designed to neither raise nor reduce overall state revenue, and would come with rebates for the poor and the middle class. But recent estimates indicate the plan could cost the state $915 million in lost revenue over four years by reducing other taxes and providing the rebates to lower-income Washingtonians.

The ballot measure here could pave the way for efforts in other states, mostly in New England, that are also considering fees on carbon pollution. The efforts in those states are legislative, rather than voter initiatives.

The idea behind a carbon tax is simple: it puts a price on the “social cost” of pollution caused by using carbon-based energy and provides an incentive to reduce carbon consumption. For example, when a customer purchases electricity from an electric company, the price includes the manufacturing cost of producing that kilowatt. But that price “does not account for the social cost of the pollution that the electricity production produced,” said Kyle Pomerleau, an analyst with the Tax Foundation, a nonprofit tax study group.

In environmentally friendly Washington state, advocates are pushing the idea as a way to fight pollution and climate change, and a petition drive garnered more than 350,000 signatures in favor of putting the initiative on the ballot this fall, 100,000 more than were needed under the state’s initiative rules. A move in the Washington Legislature to substitute a House or Senate bill for the referendum drew plenty of commentary but ended up going nowhere, leaving the issue to the voters.

Charles Komanoff, director of the Carbon Tax Center, a pro-carbon-tax group, sees the Washington state vote as pivotal to the environmental movement. He said it would “measurably lower the state’s carbon emissions, without impeding the economy and without disadvantaging poor and middle-income households.”

“By doing those things, it’s going to become a potential template for other states and ultimately for Congress.”

The initiative would raise prices on electricity, heating and gasoline. At the pump, regular gasoline would cost drivers an extra 25 cents a gallon under the $25-per-ton measure, according to Carbon Washington, the coalition group spearheading the initiative. The price of electricity generated by coal would increase by 2.5 cents per kilowatt-hour. The price of other goods and services could increase as well if producers’ costs increase.

To offset the tax’s impact, the initiative calls for a 1 percentage point decrease in the state’s 6.5 percent sales tax; a rebate of up to $1,500 a year for low-income households; and nearly eliminating the business and occupation tax on manufacturing.

The effort has run into opposition from unions and the business community, on the grounds that levying more taxes on energy-using businesses would hurt both workers and companies. Liberals also argue that with unmet needs in the state, particularly in education, it’s not smart to create a tax without raising revenue aimed at addressing those needs.

“We feel like we need a carbon tax and greenhouse gas reduction policy, but that policy needs to invest revenues in a way that’s equitable for working people in communities directly impacted by climate change,” said David Groves of the Washington State Labor Council.

Washington state Rep. J.T. Wilcox, a dairy and egg producer who is floor leader for the House Republicans, is concerned about the impact higher utility charges would have on the state’s businesses, particularly in rural areas.

“Many of the carbon emitters are not in the Seattle area — most are in outlying areas,” he said, citing examples of big manufacturers and industrial food processors. “Those rarely survive inside wealthy urban areas. Jobs prop up the rural economy and I would hate to hurt them too badly.”

Democratic Gov. Jay Inslee, who has championed other environmental measures, has not taken a position on the referendum.

Inslee came out with a clean air plan in 2014 that would have required the state’s largest emitters of greenhouse gases to gradually cut emissions. The state Department of Ecology promulgated regulations based on the governor’s proposal but withdrew them in February, in the face of criticism from businesses, some of which threatened to leave the state. The agency is looking to rewrite the rules.

The measure, rather than being perfect, is a “swing at the ball,” said Yoram Bauman, an economist and the founder of Carbon Washington.

“We are working to set an example for the rest of the world,” he said. “We take this ‘incubators of democracy’ thing seriously.”

On the East Coast, Massachusetts, Vermont and Rhode Island also are considering carbon-related bills that include taxes or fees.

The leading Massachusetts bill, called the carbon fee and rebate bill, would put a fee on carbon production. It is designed to have a neutral impact on state revenue and it would give every person in the state an equal rebate to counteract the money they would have to spend on the fee.

The Rhode Island bill is considered unlikely to become law in the same year it was introduced. But sponsors of the bill say it is gathering steam and attention for next year’s session. It, too, is designed to neither raise nor diminish revenue, according to the bill’s sponsor, Democratic Rep. Aaron Regunberg. Seventy percent of the money it would raise would be given to employers and residents as rebates.

The American Council for an Energy-Efficient Economy, a nonprofit that promotes energy efficiency, gives Massachusetts its highest ranking for energy efficiency policy and program efforts. The other states considering carbon-reducing laws, including Washington, also rank in the council’s top 10.

“We have historically been a leader in environmental issues, we should be a leader on this one,” said Washington Rep. Jessyn Farrell, a Democrat who supports the carbon tax initiative. “This is a situation where we have a legacy of being out in front and should continue to be. Climate change is affecting our state right now. The shellfish industry is suffering the effects of acidification. There’s a self-preservation argument as well.”