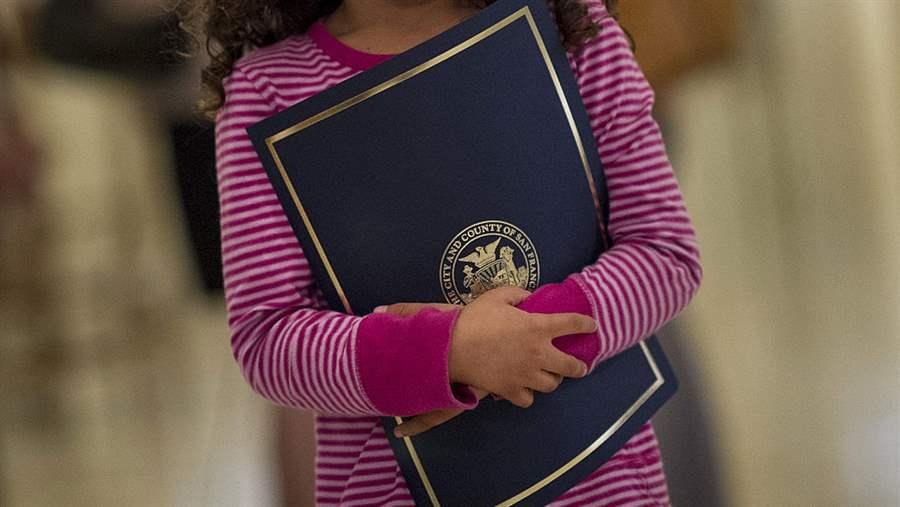 A child holds her Certificate of Honor after attending a San Francisco Board of Supervisors meeting. In 2014, the city of San Francisco allocated $2.1 million for legal services for unaccompanied minors.

Adam Hunter directs and Karina Shklyan is an associate for Pew’s immigration and the states project.

Unaccompanied alien children (UAC, or unaccompanied minors) crossing the U.S.-Mexico border reached a peak in 2014 with more than 68,000 children apprehended in that year alone. While the numbers dropped by about half in 2015, this year they are on pace to surpass the figures from last year. Looking at the first five months of fiscal year 2016, apprehensions have increased an average of 89% compared to the same time period last year.

With the dramatic increase in unaccompanied minors over the past five years, some communities have expressed willingness to accept these children, while others have voiced concerns. In July 2014, Syracuse, New York, Mayor Stephanie Miner penned a letter to the federal government stating that the community would partner with the federal government in finding locations to house unaccompanied minors. In contrast, a 2014 Surry County, North Carolina unanimous resolution stated that unaccompanied children would have an adverse effect on the local school district education funding, resources, campus security, public health, and safety infrastructure. 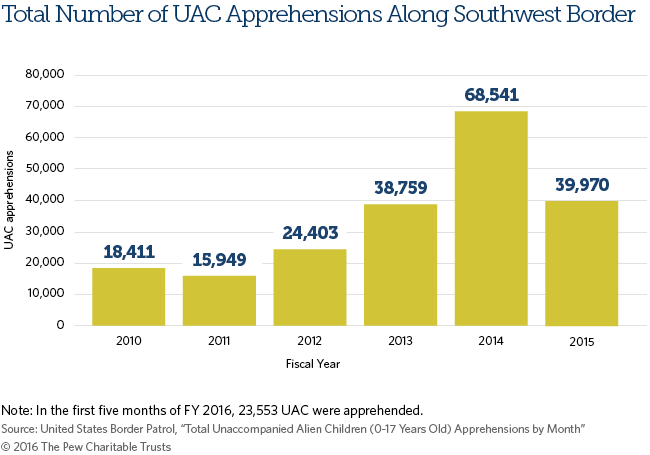 In addition to the new influx of children each year, many of those who arrived in previous years are still awaiting a final decision on their immigration case. Almost 86,000 of the unaccompanied minors apprehended at the Southern border in fiscal years 2014 and 2015 were placed in formal immigration proceedings due to either their country of origin, claim of asylum or demonstrated fear of returning to their home country. More than half of these immigration cases were still pending as of February 29, 2016. Even though the federal government ultimately decides whether these minors may remain in the U.S., states and localities take on critical roles as the children await the final determination of their immigration cases as in many cases this can take years.

Children apprehended by Border Patrol agents and deemed to be UAC are transferred to a federal shelter facility. All of these federally-funded facilities must be licensed by the state. The facilities are commonly run through cooperative agreements and contracts with nonprofit organizations, and in some cases, local governments. As of August 2015, there were 131 shelters in 15 states. These shelters are dispersed across the country, from Arizona and Oregon to New York and New Jersey.

Providing education to children who are under the care of sponsors

Under federal law, states and localities are required to provide all children, regardless of immigration status, with equal access to a free public K-12 education. In addition to basic education, states are also responsible for determining educational needs and providing bilingual education, after school programs, mental health resources, cultural accommodations and other services to unaccompanied minors, if needed. In California, the Oakland Unified School District (OUSD) has centralized enrollment and appointed an unaccompanied minor support services specialist to help connect the children to appropriate services to address the special needs of this population.

Because they lack legal immigration status, unaccompanied minors are not generally eligible for most federal assistance programs other than those they receive while in a federally funded shelter. Eligibility for state-funded health care and other assistance programs varies depending on state and local laws and policies. Unaccompanied minors who meet all eligibility requirements may be able to obtain health care, social services, municipal identification cards, or driver’s licenses.

State and local officials have determined that these children may have unique health and mental health needs.  For example, in Montgomery County, Maryland, Uma Ahluwalia, director of the county’s Department of Health and Human Services, acknowledged that these children typically have had little access to health services in their home countries so their needs are significant. The county’s offerings also include prenatal services and services for unaccompanied minors who may become homeless. “Because all of these extra support services have to be funded and supported through county dollars, that puts extraordinary pressure in terms of how far we’re able to go and what we’re able to do,” says Ahulwalia.

The decision on whether unaccompanied minors are eligible to receive some form of immigration relief and allowed to remain in the U.S. legally is made by the federal government. One particular form of relief that is available is Special Immigrant Juvenile Status (SIJS). If pursuing SIJS, unaccompanied minors must obtain a detailed court order from a state juvenile court, which makes a determination about child custody and care. These courts do not grant SIJS, but rather assist with the federal government’s determination as to whether a child is eligible.

While state courts are required to be involved in the SIJS process, they also may be involved in issues regarding legal guardianship for purposes of enrolling a child in health care insurance or school. They also may choose to provide funding for legal representation for a child’s immigration proceedings. In 2014, the city of San Francisco allocated $2.1 million for legal services for unaccompanied minors.  In July 2015, New York City Council Speaker Melissa Mark-Viverito announced that the city’s Unaccompanied Minor Initiative after one year had trained 5,000 lawyers, screened 1,600 immigrants, taken 648 cases, won 14 asylum petitions, and provided legal representation to all unaccompanied minors who arrived in New York City.

The number of unaccompanied minors crossing the border is on the rise again, and many of the children who have arrived since 2014 are still awaiting a decision on their legal status. As a result, states and cities will be largely responsible for the welfare of these children for the foreseeable future.