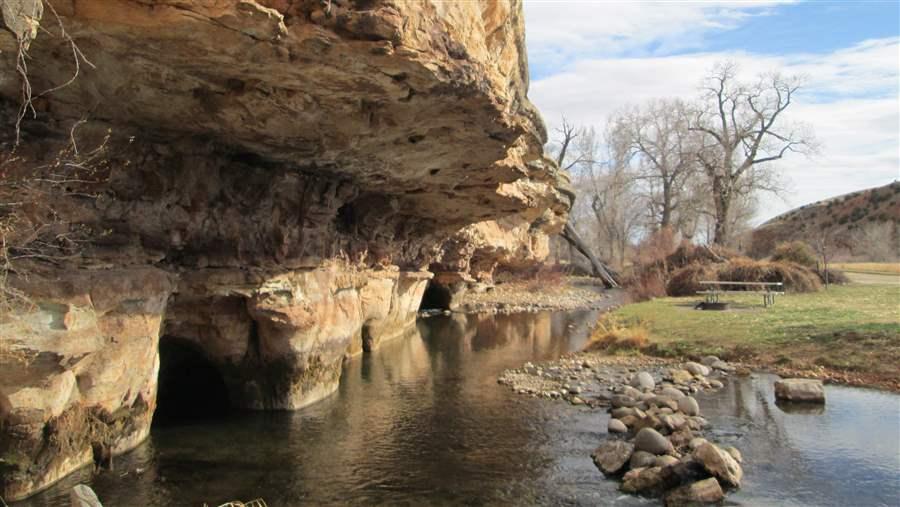 A creek runs along a canyon at Medicine Lodge State Archeological Site in Wyoming, where park employees say a decline in state funding has forced them to cut corners wherever they can.

HYATTVILLE, Wyo. — These are tough times at Wyoming’s state parks. Employees are taking on new tasks, like hauling trash, and using duct tape to keep their equipment from falling apart. They’ve had to cut back on spraying mustard weed, making fires a bigger threat.

Here at Medicine Lodge State Archaeological Site in the north of the state, Native American petroglyphs dot a massive sandstone cliff and campsites are set up along a trickling creek that spills out of a canyon. But the budget was once so tight, “we were down to just being lucky to buy toilet paper and pump toilets,” said Brooks Jordan, the park’s superintendent and lone employee.

After years of cutbacks, many of the nation’s state parks are facing similar situations, forced to cut programming, reduce hours of operations, and sometimes shut their gates. The shrinking budgets have prompted park officials to look for new sources of funding.

Arizona has turned over the management of some state parks to local communities. South Carolina is experimenting with adjusting price based on demand, and Utah is looking for revenue in activities like zip lining. Some states are turning to corporate sponsorships and some are pitching annual park passes that can be purchased when drivers register their cars.

The scramble for new sources of revenue comes at a time when state parks are more popular than ever. State parks were visited roughly 759 million times in 2015, far outpacing the 307 million visits to national parks. It’s a significant increase from a decade ago, when there were 708 million visits to state parks.

For many Americans, state parks provide the easiest and least expensive way to connect with nature. They can also serve as vital economic drivers for surrounding areas, as visitors stop for gas, food and other necessities.

“The paradox is we have a product that’s more popular than ever but our ability to provide that product is on the decline,” said Milward Simpson, who oversees Wyoming’s parks department.

While most state parks generate some revenue, many remain reliant on state funds. And in many states, only legislatures can increase park fees. Some park officials have little discretion over what happens to the entrance and camping fees they collect. That money gets turned over to the state, which can direct it to particular park projects or to different agencies.

A dedicated and reliable source of park funding, like a lottery or sales tax, can be key to keeping parks afloat, park leaders say.

However, Margaret Walls, an environmental economist for Resources for the Future, a nonpartisan conservation group, cautioned that lotteries must pay out winnings before sending money to parks, and some taxes may be too narrow to provide reliable funding for parks.

Those dedicated funds may also come with restrictions. That is the case in Minnesota, where voters in 2008 approved a small increase in the sales tax to be used mainly for new park programming and construction. But when it comes to paying for the rising cost of wages, gas and electricity, the parks department has been struggling, said Erika Rivers, the director.

Similarly in Texas, where the state’s sporting goods sales tax covers about half the costs of operating state parks, the department still relies on money from the state’s general fund to help deal with a maintenance backlog. Russell Fishbeck, deputy director of the parks department, said the money for repairs included in the most recent budget will only chip away at what he estimates is $700 million to $800 million in backlogged projects.

“Even at $90 million a year, even if we got that every single year, that’s 10 years of repairs without including new repairs and natural disasters that will occur along the way,” Fishbeck said.

In New Hampshire, the parks department pays for all of its operating expenses using only park-generated revenue. Other states are trying to get there.

In Utah, the parks department is trying to draw more visitors and boost revenue by adding new activities, like zip lines ($200 for an hour, for up to 40 people). Fred Hayes, the parks director, said the additions were made after state funding was slashed and his office was told to make up the rest through user fees. State funding for operating expenses went from $18 million in 2011 to $4 million in 2015.

“In the past, a park manager would get a budget of $150,000, and I would say don’t overspend it. But now their job is to generate that money, too,” Hayes said. Utah parks still get $4 million from the state for operations, but they now take in $47 million on their own, much of which goes into a reserve fund, compared to $12 million in 2011.

They put up disc golf in empty fields and host archery sessions after school to bring in people at times they may not usually visit.

In South Carolina, the parks department used to generate 82 percent of the money needed to cover operating costs. But after making changes in 2011, that is up to 94 percent or $27 million. Phil Gaines, the state parks director, said he hopes a marina and cabins that are under construction will help the parks to better support themselves.

The department has begun adjusting prices for campsites based on demand, much like airlines and hotels do.

But some state parks have fallen short of the self-sufficiency goal.

Texas tried 15 years ago, Fishbeck said, but the result was higher prices that made the parks out of reach for some people. “Our belief is that state parks are not meant to exclude anyone,” he said.

Fishbeck said the parks were able to cover many of their own operating costs, but could not afford to pay for new projects or to fix things up around the parks.

Some state park systems have turned to other government entities for help.

In 2009, Arizona was planning to close eight parks because it was having trouble covering the cost of running them. When local officials heard the news, several cities stepped in to manage the parks using their own funding.

“I like partnerships,” said Sue Black, the head of Arizona State Parks. “You have more people at the table with a vested interest in the property.”

States like Idaho and Michigan have boosted revenue by offering year-round access passes at the Department of Motor Vehicles. In Michigan, which used to sell a $24 annual pass, people are offered a $10 license plate sticker that provides access to all the state’s parks. One in four bought the sticker in its first year, 2011. That’s up to 30 percent, according to Ron Olson, the head of the parks department.

State parks also get money from the federal government, about 1 percent of park operating expenses nationally. Those funds have not gone up much over the last decade, from $31 million in 2006 to $34 million in 2015, according to data from the National Association of State Park Directors (NASPD).

Parks are also turning to private businesses to help cover costs, often in the form of corporate sponsorships or promotions.

Lewis Ledford, executive director of NASPD, said some states, particularly bigger ones like New York and California, have been able to get help from large corporations.

Such sponsorships don’t usually help fund daily operations at a park. They mostly go to large one-time projects or park activities. For instance, in South Carolina, BMW Manufacturing Co. donated $100,000 to a $500,000 bathhouse renovation effort and Fujifilm Manufacturing U.S.A. Inc. donated $150,000 toward the $2.3 million construction of an environmental education center.

In Wyoming, where the state has cut its parks budget three times since 2008, park workers have tried to shield visitors from the effects of the cuts.

Many parks have tried to limit spending on trash, eliminating pickup services in favor of taking on the time-consuming task themselves.

Jordan’s park is tucked away in rolling hills, a green oasis at the base of a small canyon at the edge of a national forest. Its tree-lined creek is a sharp contrast with the miles and miles of dry farmland that surrounds it. And once a week, he drives his pickup more than 80 miles round trip to the nearest dump.

“A lot of park staff have the mentality that they don’t want visitors to know or feel the budget cuts,” Jordan said, “but at a certain point it becomes apparent when you have to reduce services or eliminate them entirely.”