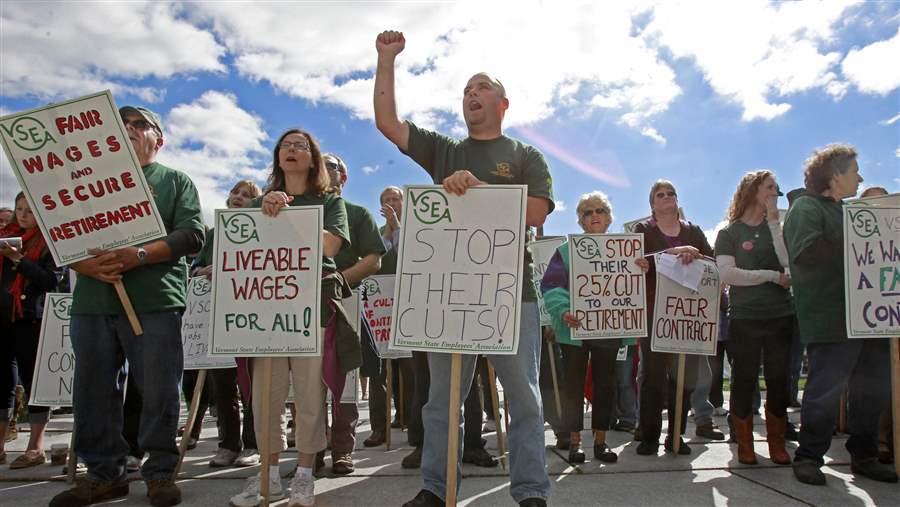 Editor's Note: The headline and story have been updated to clarify that states may have data on temporary workers, but that it's not always immediately accessible.

Steve Howard, the head of Vermont’s state employees union, says that temporary jobs are among the fastest-growing in state government. But Vermont’s Human Resources Department wasn’t sure.

Many states don’t publish records of their short-term and contract hires. Even states that do, like Vermont, have to do a little research to determine how that share of the state workforce may be changing over time and why.

“We probably have that data,” said Thomas Cheney, deputy commissioner for the Vermont Department of Human Resources on investigating Howard’s claim. He can say that when the state has experienced increases in temporary staffing in recent years, it's been because of an emergency, such as Tropical Storm Irene.

A small but growing body of research suggests that work arrangements other than full-time jobs are more common across the economy, including in government. It’s hard to tell, however, how much states contribute to the so-called 1099 economy through their hiring and contracting.

States have long hired short-term workers for seasonal jobs, to fill emergency vacancies, or to serve as outside advisers. Such arrangements allow agencies to staff up during busy periods and give workers more flexibility.

But temporary jobs also can leave workers without benefits such as unemployment or health insurance. And agencies may end up spending more money on outside help than they would if they brought people on full-time. There’s no way for states to weigh costs and benefits if they don’t track their employees.

A few states, such as Hawaii and Vermont, are taking a closer look at their short-term positions to make sure they’re being used appropriately. Georgia’s one state that has been prompted by federal health care reform to keep a closer eye on short-term jobs.

“I think at just a strategic level, it makes business sense to really understand what it takes for us to deliver services to the state of Georgia,” said Candy Sarvis, the deputy commissioner of human resources administration for the Georgia Department of Administrative Services.

A Lack of Data

Positions that are neither permanent nor full-time could employ as many as 40 percent of Americans, according to a 2015 study from the U.S. Government Accountability Office.

Lawrence Katz of Harvard University and Alan Krueger of Princeton University published survey data last month that showed more people are working as freelancers, on an on-call basis, for temporary help agencies or for contract firms across all industries and occupations. In 2005, about 10 percent of jobs fit those definitions. Last year, 16 percent did.

The increase was so significant that it might account for all the job growth over the past decade, the economists said.

Public administration experienced a jump from about 2 percent of workers in temporary arrangements to 10 percent, they found. In education and health service, which include many public sector jobs, 16 percent of jobs now fit their definition of alternative work arrangements.

Across all industries, the arrangement that increased the most was workers hired through contract firms.

It’s hard to tell if — or how — state workforces have been shaped by the trend. Many states only keep close track of their core civil servants, who are still overwhelmingly full-time, permanent employees. State agencies track their spending on contracts, not the number of jobs those contracts create.

Colorado, for example, defines as state workers those employees of the executive, judicial and legislative branches, as well as most employees in higher education. But the state’s Human Resources Division only oversees full-time and part-time workers in executive branch agencies. So those workers, who comprise a third of the state’s workforce, are the ones included in annual workforce reports.

The state’s human resources team doesn’t track how many people are employed through personal services contracts, said Michaela Turner, the communications manager who puts the reports together.

Federal health care reform has pushed states to keep better data. Georgia started including nonpermanent employees in its workforce reports in 2013, and started tracking the share of employees that qualified for health insurance in 2014. The Affordable Care Act requires large employers to provide health insurance to workers who log at least 30 hours a week.

“I wanted to get a better handle on how many people were actually working for the state,” Sarvis said.

Eighty percent of the state’s 71,000 employees worked full time and were eligible for benefits in 2015, a slight decrease from the year before. Sixteen percent were considered short-term hires, not including independent contractors and people employed by temporary staffing firms.

Sarvis’ office is planning to more closely manage temporary staffing, too, because the state may have to offer those employees health insurance under some circumstances. “The IRS may consider them our employees instead of the temp staffing agency’s employees,” she said.

That’s typical. About half of college faculty nationally now work on a part-time basis.

Nonstandard jobs give state agencies hiring flexibility, but positions that fly under the radar can be easily abused.

In 2013, a Massachusetts investigation found some state agencies had held on to temporary workers for years — including, in one case, a temporary employee who worked in accounting for the State Police for over a decade.

Outside workers can also cost taxpayers. Nonpartisan evaluators for the North Carolina Legislature found last year that state agencies were hiring consultants and contractors improperly and paying some of them more than what the state’s top executives earn.

In Vermont, one challenge is that the Legislature sets the total number of state jobs. When state agencies need more workers than they’ve been allocated, they may hire temps instead. There are about 2,000 temporary workers in the state, and Howard says some departments rely too heavily on them.

In its 2014 budget, the Legislature approved a pilot program that allows some agencies to use their existing funding to add full-time positions.

About 175 positions have been created to date, Cheney said. In some cases, state agencies have converted temporary and contract positions to full-time positions. Cheney’s office hasn’t calculated whether the changes have saved or cost the state money.

“What the position pilot allows us to do is to refocus on ensuring that our programs are achieving the goals that we set out for them, and they’re operating within their means,” Cheney said. The Legislature is considering extending the pilot.

In Hawaii, a House bill would limit temporary workers to serving two 89-day terms, with certain exceptions. Converting the state’s 300 temporary employees to full-time workers would add $3 million to $4 million a year to the state pension fund, according to the Department of Budget and Finance.

State agencies say that, for various reasons, some jobs are impossible to fill with full-time workers. Georgia’s Sarvis said many workers don’t want nine-to-five jobs anymore. “We’ve got several examples in Georgia where we’ve offered full-time positions to individuals and they’ve said ‘no, thank you,’ ” she said.

The investigative division at the Hawaii Attorney General’s Office relies heavily on retired law enforcement officers hired as temps. “The compensation, benefits and career opportunities for an investigator is not competitive when compared with other law enforcement opportunities in the State,” the agency explained in written testimony to the Legislature.

Temporary jobs aren’t going anywhere, but federal rules and regulations will push all employers — including states — to devote more attention to the people they hire. The Department of Labor called for employers to make sure they weren’t misclassifying employees as independent contractors last year, and is preparing a rule that would extend overtime pay to more white-collar workers.

“Regardless of sort of the nudge that we got from a federal level, I think you’ll find that leaders across the state just think that this is the right thing to do anyway,” Sarvis said of her office’s efforts to track temporary workers.