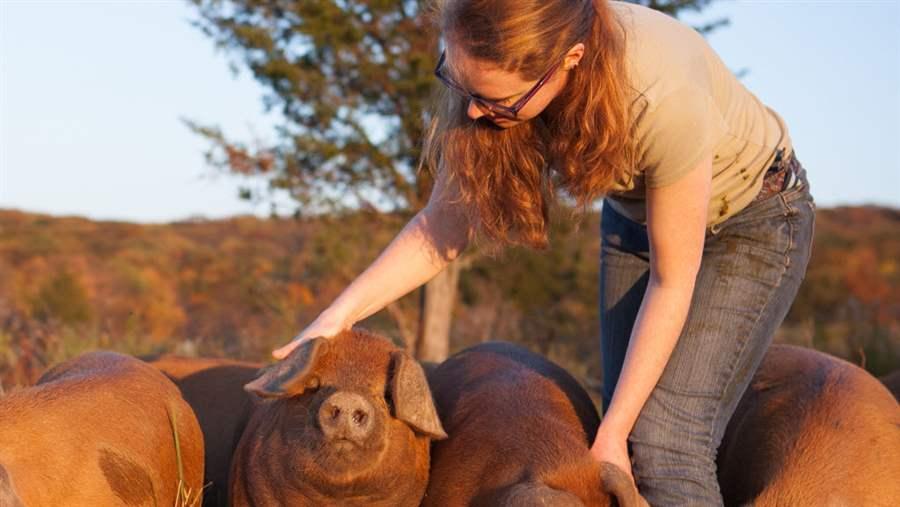 Leanna Mulvihill cares for her pigs on her farm in Germantown, New York. The state paid off most of her student loan debt in a new program for beginning farmers meant to entice more young people to take up careers in farming.

This story has been updated to correct that the U.S. Department of Education offers income-based repayment plans for student loans.

The farm of Bryce Brewer’s dreams would produce strawberries during even the worst Wisconsin winters. The climate-controlled setup would use no chemicals, less water and one key element: fish waste.

Brewer, 23, learned in college about this unconventional, emerging agricultural method called aquaponics. Yet, with $35,000 in student loan debt, he said it will be a while before he can get the $100,000 he needs to start the farm.

While aspiring farmers like Brewer have always had a hard time getting loans and land, they now point to student loan debt as another obstacle to a career in agriculture. Hearing their struggles — and hoping to entice more young people into a graying industry — federal and state lawmakers want to help them pay down their debt.

The U.S. Congress is considering a bill that would add farmers to the list of occupations that qualify for a federal program that forgives student loans for public service workers, such as teachers and police officers. In the meantime, New York started a small student loan forgiveness program for farmers last year, and the Wisconsin Legislature is considering doing the same.

Proponents, such as the National Young Farmers Coalition (NYFC), a national nonprofit, say the programs will encourage more young people to farm at a time the industry needs them. The American farmer is aging — the average age of a principal farm operator in 2012 was 58, compared to 51 in 1982. At the same time, the number of new farmers is decreasing. The number of farmers who had been operating their farm for less than five years fell 23 percent from 2007 to 2012, to 171,550. 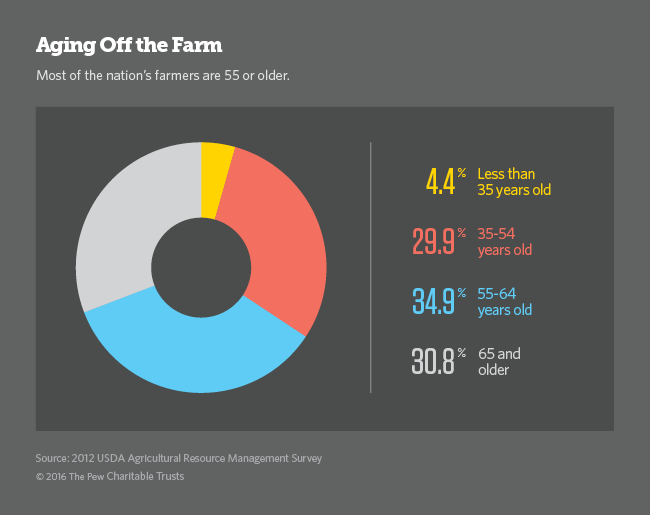 Seeing the trends, the state lawmakers who introduced the loan-forgiveness measures, New York Republican state Sen. Patty Ritchie and Wisconsin Democratic state Rep. Mark Spreitzer, say states should be doing everything they can to attract new farmers, given agriculture’s importance to the economy. Farming and its related industries provided nearly one of every 10 jobs in the U.S. in 2014. And every dollar in farm exports in 2014 stimulated another $1.27 in business activity.

The proposals to aid beginning farmers come as concerns grow about the increasing cost of college and debt from student loans. Seven in 10 students who graduated from college in 2014 had student loan debt, with an average of $28,950 per borrower.

Yet some agricultural economists and state agricultural officials say what new farmers need more than student loan forgiveness are programs that make it easier to find and buy land and obtain credit, the two barriers beginning farmers most often face.

Farmers are “rugged individualists,” said Richard Ball, commissioner of the Department of Agriculture & Markets in New York. Although they do want the government to recognize the importance of the industry, they don’t want subsidies, he said. “Most farmers will say, ‘get the policy right, get the attitude right, and then let us do our job.’ ”

Farmers have a harder time making monthly student loan payments than other young workers, said Eric Hansen, policy analyst at NYFC. Many get paid once a year, at the end of the harvest season. And they have to spend money before they make it, which makes access to credit vital.

Also, most farmers don’t earn enough on the farm to make ends meet; the majority of farm households in 2014 made most of their money away from the farm.

In a survey of new or aspiring farmers, NYFC found that those with student loan debt owed on average $35,000. Of those, 28 percent said that because of their debt, they didn’t pursue farming or are waiting to start. Many also said they couldn’t get credit because of their loans.

With enormous start-up costs, such as land and machinery, new farmers have greater financial worries than student loan debt, said Paul Mitchell, associate professor of agricultural and applied economics at University of Wisconsin-Madison.

“Some of these government programs are just like throwing rocks into the Mississippi River,” Mitchell said. 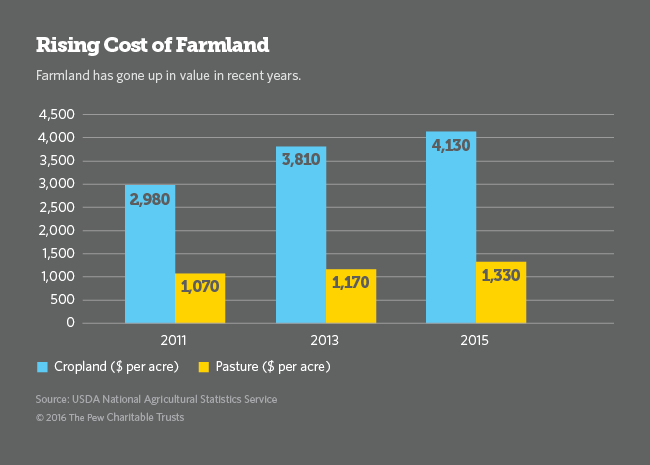 To be eligible for the New York program, a farmer must have graduated in the last two years. In Wisconsin, the proposal is five years. Yet half the new farmers who responded to the NYFC survey said it took five years or longer to get started. Nearly half of new farmers are older than 35.

State officials are hopeful the programs will add momentum to the farm-to-table and organic food movements, which are often fueled by young people using new technology and new farming methods. In Wisconsin, preference would be given to farmers who agree to use sustainable-agriculture techniques.

Brewer, who lives in Oshkosh, said fish would do much of the work at his aquaponics farm. The fish waste acts as the organic matter supplying nutrients to help crops grow.

In New York, Leanna Mulvihill used the money she received from the student loan forgiveness program to build her farm. At 26, she is in her second year of operating a community supported agriculture (CSA) meat business with 15 pigs, 40 lambs and two cows on 50 acres she is leasing in Germantown. With CSAs, a group of people pay a local farm or farms at the start of a season for a share of an anticipated harvest and then receive it as it is produced.

Mulvihill, who graduated from the State University of New York College of Environmental Science and Forestry in Syracuse with a degree in environmental engineering, received $10,000 of the total $100,000 awarded by the state last year in loan forgiveness payouts. She received another $8,000 this year.

The program allows recipients to get funding for multiple years, at a cap of $50,000 per person. It requires recipients to have an undergraduate degree from an in-state college, and to agree to operate a farm full-time for five years. But it doesn’t require that the money be spent paying down student loans. Mulvihill used part of the check she received from the state on her loans, and part of it on her business.

The program proposed in Wisconsin would provide up to $30,000 in student loan forgiveness per person, and it would require participants to commit to farming for five years.

Is Farming a Public Service?

The federal proposal — which would forgive student loans for farmers after 10 years of monthly payments — has drawn more opposition than the state proposals.

It’s based on the concept that farmers provide a public service, Hansen said, by feeding the public, helping to hold rural communities together, and being stewards of the land, on the front line of conservation efforts.

Yet some in agriculture, such as Ball in New York, aren’t so sure farmers qualify as working in public service. Farmers provide “a service to the public,” he said. “But that’s different.”

Besides, Holt said, farmers with student loans issued by U.S. Department of Education already have the option of getting income-based repayment plans, which can lower monthly payments.

In those plans, loans are forgiven after a certain amount of time — often 20 to 25 years — although recipients must pay taxes on the forgiven amount. With the federal forgiveness program, loans would be paid off after 10 years, and the money would be awarded tax-free.

Some states have other programs to assist beginning farmers. The most common is a tax-exempt bond program authorized by the federal tax code, known as Aggie Bonds. The program — available in states such as Colorado, Illinois, Kansas, Missouri, Oregon and South Dakota — provides low-interest loans for buying land, machinery, buildings and livestock.

These loans, and loans offered by the U.S. Department of Agriculture Farm Service Agency for beginning farmers, have become more important as banks have tightened credit to new businesses since 2008, said Wyatt Fraas, farm and community program assistant director of the Center for Rural Affairs.

Iowa has found a way to support new farmers without spending taxpayer money.

The Iowa Agricultural Development Division provides tax credit and loan programs for farmers, and is paid for by participants’ loan application fees and closing costs, as well as interest earned from a trust fund. New farmers can get low-interest loans from the agency, and retiring farmers who hire new farmers or lease them land, equipment or livestock can get tax credits. Nebraska started a similar tax credit program for retiring farmers in 2013.

New York also began offering matching grants last year for new farmers who make improvements to their farms. The state awarded $610,000 in grants last year and budgeted for $1 million in grants this year. Massachusetts and Texas have similar programs. In Texas, the grants are only available to young farmers.