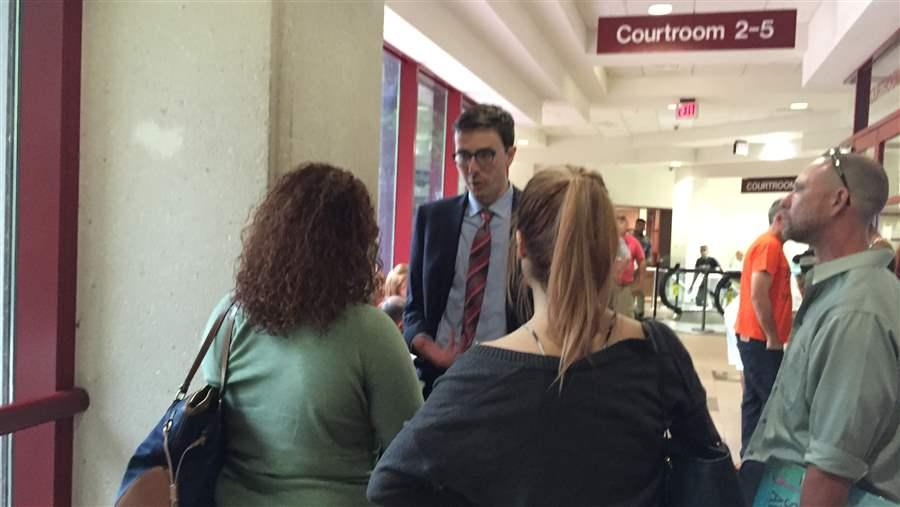 Andy Byrd, an attorney, explains the services offered by the Miami-Dade County Public Defender’s Office to defendants awaiting arraignment at the courthouse in the South Dade Government Center. Public defenders there are on hand to make sure defendants in misdemeanor cases have access to an attorney if they need one.

This story has been updated to correct the number of staff in the Missouri State Public Defender System.

Accused of battery, a crime she denies committing, the south Florida woman, who is homeless, almost refused the help of public defenders who eventually might help prove her innocence.

“I thought they were telling me to pay more or something,” Greene, 54, said. “At this point, I’m not able to pay anything.”

Had Greene arrived in court a year ago, Marissa Glatzer, an assistant public defender, would not have been there to explain that a public defender could help manage her case.

Since August, public defenders in Miami-Dade County have been dispatched to courtrooms to work on misdemeanor criminal cases. Public defenders across the nation typically don’t show up for the low-level cases, which include petty theft and marijuana possession. But Glatzer said putting lawyers in these courtrooms can prevent indigent defendants from taking disadvantageous plea deals that result in prohibitive fines and court costs. Convictions can also have long-term consequences: They can make it hard to get a job or get into public housing, she said.

Miami’s effort is rare at a time when many public defender’s offices are struggling to provide adequate representation for people unable to pay for their own lawyer in more serious felony cases, a right guaranteed by the U.S. Constitution.

The lack of funding for public defenders has gotten so bad in Louisiana that the state’s Public Defender Board has been sued for putting new clients on a waitlist because there are not enough attorneys to take their cases. In Missouri, lawyers reported only being able to do a fraction of the work needed to effectively represent their clients.

There is a lack of funding for public defense in every state, according to Colette Tvedt of the National Association of Criminal Defense Lawyers; and people charged with low-level misdemeanors, often poor minorities, suffer the most.

“I’m sitting in courtrooms and seeing mass amounts of men, women and children, often in poor, black communities, that are being shuffled through the system without any representation,” Tvedt said.

Without a lawyer to argue against what Tvedt calls exorbitant fees, fines and court costs, defendants are likely to end up in jail when they cannot pay.

Public defender’s offices across the country are struggling because state and local funding has been cut while legislatures have simultaneously elevated many infractions from civil to criminal penalties, Tvedt said.

In many places, she said, crimes like driving on a suspended license, possessing alcohol underage or even sleeping in public have become arrest-worthy offenses, with severe outcomes — like job loss or deportation — for those convicted of such crimes.

Only 27 percent of county-based and 21 percent of state-based public defender’s offices have enough lawyers to appropriately handle their caseloads, the Justice Policy Institute (JPI) found in 2011.

“There’s discussion that there’s no money for repairing the roads, for education; but public defense, for whatever reason, is on the lowest priority list, even though it impacts the communities probably the most,” Tvedt said.

In Missouri, the state’s public defenders spend an average of nine hours on certain felony cases that really need about 47 hours of work, a 2014 American Bar Association study found.

Michael Barrett, director of the Missouri State Public Defender System, said the study proves he would need to add 254 more lawyers to a staff of 361 to adequately serve clients. Last year, his office handled about 74,000 cases, Barrett said, giving between 200 and 300 cases to each lawyer.

The U.S. Department of Justice also found defendants in St. Louis County, Missouri, were experiencing an unconstitutional denial of due process because of the size of public defenders’ caseloads.

There is no federal mandate for how states fund public defense, and though most public defender’s offices rely on state money for most or all of their funding, 19 states shift that responsibility to the counties.

Since 1992, Mark Stephens, the head of the public defender’s office in Knox County, Tennessee, has only been able to use state money to pay for four new lawyers on his 26-person legal staff. That sluggish growth has made it difficult to respond to the increasing size of police departments and changes in prosecution techniques like the advent of DNA testing, he said.

“You’ve got a lot more officers who do what officers do — and that is enforce the law and arrest people,” Stephens said. “But you don’t see a corresponding increase in the funding for public defenders.”

For every dollar spent on public defense, taxpayers in the United States spend another $14 on correctional systems, according to JPI.

Stephens has consistently received local funding — an amount based on allocations to the county state’s attorney — but expects a budget cut this year.

In Missouri, Barrett hopes lawmakers will maintain the more than $4 million allocated in a state budget proposal, but even if they do, it doesn’t mean he will be able to hire new lawyers.

In addition, Missouri defendants are also charged a small fee that goes toward attorney training; and in Florida, people like Greene are assessed a one-time $50 fee for their defense.

“Of course we’re not thrilled about charging people for exercising their constitutional rights,” Barret said. “But at the same time, it’s a drop in the bucket of what we need.”

In other states, defendants are on the hook for the entire cost of their court-appointed lawyer. South Dakota defendants are charged $92 per hour spent on their case, an impossible rate for most clients to pay, said Katie Dunn, an assistant public defender in Minnehaha County.

Though judges are supposed to assess defendants’ ability to pay, their failure to do so, and to pay other court costs, often lands them back in jail, where it costs the state $94 a night to house them, Dunn said.

Incarceration leads to time away from work, and soon South Dakota officials will also start suspending the driver’s licenses of people who cannot pay.

As of July, 31,638 people owed the state more than $16 million in judicial system fines and restitution.

“I am not operating under any illusion that any of them will be able to pay it back,” Dunn said.

Fees and fines levied against indigent defendants are compounded by the fact that in the majority of misdemeanor cases, defendants like Cecelia Greene take plea deals or go to trial without a lawyer and suffer the consequences, said Carlos Martinez, who heads the Miami-Dade County Public Defender’s Office.

“People are getting convictions without an attorney and ruining their lives because they can’t get jobs,” Martinez said.

Making his staff available to monitor misdemeanor cases is possible in part because funding for the department has stabilized in recent years and crime rates in the county of more than 2.6 million have dropped. He’s still studying the program’s effectiveness, but already knows that judges are reluctant to appoint a defense attorney unless a prosecutor is pursuing jail time, and defendants are not quick to request the service.

Last week, Glatzer and another attorney picked up just three clients from a docket of 60 misdemeanor cases.

“We have not been able to yet change the culture in our courts,” Martinez said. “Changing it to a culture of knowing you have a right to an attorney.”